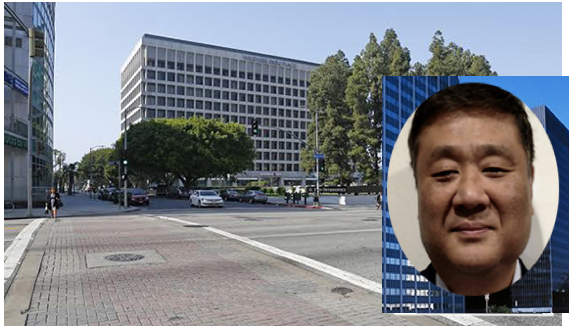 DEEGAN ON LA-It got ugly at a meeting hosted by City Council President Herb Wesson (CD 10) a few days ago, where he was attempting to bring both sides of a development dispute together -- community stakeholders and the developer -- in an attempt to reach consensus. The dispute, that led to a threat of assault weapon violence by the developer, Dr. David Lee of Jamison Services, has pitted some of the Koreatown community against a major K’town developer.

It’s a microcosm of two entirely different worlds: the community stakeholders say they have a protest message; he says he has an AR-15 assault weapon. They say they will fight. He says he will shoot.

These community members are concerned about losing a rare and valued green space that helps break up a very dense neighborhood. The developer wants to pave it over and erect a 36-story tower. The community has won a victory with the designation of Historic-Cultural Monument status of the developer’s Beneficial Plaza and Liberty Park property, at 3700 Wilshire Boulevard, awarded by the Los Angeles Cultural Heritage Commission. The developer says he will miss out on a financial windfall if he can’t build the way he wants because of HCM status.

The community has little money or influence with no lifelines to higher places. Lee is very wealthy, with a network of powerful friends and he’s made his threat to use armed force at a meeting in City Council President Herb Wesson’s Koreatown district office. The people vote. But he contributes heavily to political campaigns. And while the community has little experience in getting what they want, Lee has a history of meeting his goals. It’s the underdogs versus the overlord.

The dynamics of this dispute may have changed on February 27, when LAPD was asked to investigate a threat of violence arising from when developer Dr. David Lee said he would use his AR-15 assault weapon to keep the community away from his development project. The incident was witnessed by politicos attending the meeting in Wesson’s office, as well as by community stakeholders, and the developer’s son and his lawyer.

A first-hand account of the meeting was provided to CityWatch by Annette Van Duren, representing Save Liberty Park and who is also the applicant for the Historic-Cultural Monument nomination. She relayed that Dr. Lee said that “if we don't let him build, he will put up a wall, pave over, and cut the trees down, he will use his AR-15 rifle and shoot people who step on his land. When told by Wesson’s chief of staff Deron Williams ‘you can't say things like that,’ Dr. Lee says yes, I can, because he has the automatic rifle at home and it's his land. Everyone in the room was unnerved and in shock.”

Wesson’s Planning Deputy Jordan Beroukhim reported to the community, “I was able to bring him (Wesson -- who had left the meeting when it looked like consensus may have been near, but before the automatic weapon threat was made) up to speed on this matter. He alerted our Council LAPD Liaison of what was said at the meeting. I believe there will be an investigation opened in this point in time.”

There are already murmurings that Detective Kim may be nuancing the incident, by not seeing a “threat” but instead “anger.” Others say Dr. Lee had “a non-PC moment;” he was there, however, with legal counsel who could have immediately stepped in and advised his client to apologize. Some female opponents of the development say they felt intimidated that Dr. Lee told them at the meeting that he knew where they lived. Ultimately, it will be up to the City Attorney to decide what to do with a sensitive case that involves a triangulation of community stakeholders, a powerful Councilmember, and a rich developer who is Wesson’s constituent and political donor.

Discussing the matter exclusively with CityWatch, Vanessa Rodriguez, a spokeswoman for Council President Wesson, said, “Threats of violence against the community will not be tolerated. The Council President is committed to fostering a community atmosphere free from intimidation.” While Detective Kim may or may not wind up seeing what Dr. Lee said as being a “threat” or “intimidation,” the City Council President apparently saw it that way, which could be why he spoke out so forcefully in his public statement, and why he alerted the City Council’s LAPD Liaison to inform the police of the incident in the first place so it could be properly investigated.

As startling as the threat of using an assault weapon against opponents is, it could also be seen as an incredibly tone-deaf outburst, made in the midst of a national conversation about gun control. It’s almost incredible that such a threat would be made in a meeting at the Council President's district office to a room full of politicos and community stakeholders.

Rodriguez provided an overview of the incident: “The Council President requested an opportunity to meet with the community stakeholders and the developer together to work towards a compromise. The first joint meeting, scheduled by the Council President took place at his district office on Friday, February 23. When it appeared as though consensus was possible, the Council President excused himself from the meeting and suggested the meeting participants reconvene the following week to resume discussions.”

According to Save Liberty Park’s Van Duren, “Dr. Lee says the park is a dangerous place with skateboarders, homeless people, drug users. He says having a building is better and safer than having a park. If we don't let him build, he reiterated that he will build a wall around park, not water it, chop down the pine trees and not mow it. He will concrete the entire area, so he can park his car on it.”

“Dr. Lee asked us to drop the (HCM) nomination and let the EIR process take place”, added Van Duren. “We emphasized that on his plans for the park's destruction, this cultural landscape is a very unique place in Los Angeles, and there’s not many places like this.”

CityWatch reached out to Save Liberty Park, to Phillip Lee and Garrett Lee at Jamison Services, and to Herb Wesson’s office for comment, to verify facts and try to get both sides of the story. All but Jamison responded, although Jamison President Garrett Lee, who runs the company’s development department, had previously told CityWatch that “the area in front of the building is not public open space, but private property with a plaza for an office building. The proposed project will leave the existing office building intact without any demolition. Our proposal to create a mixed-use building will help meet City goals by providing needed housing near one the City’s busiest transit stops at Wilshire and Western.”

status for Beneficial Plaza and Liberty Park. The matter was referred to the City Council's Planning and Land Use Management (PLUM) committee for a hearing on February 27 but was pushed back to allow all the parties to try and reach consensus.

Currently, the City Council’s Planning and Land Use Management (PLUM) committee is scheduled to hear the recommendation for Historic-Cultural Monument status on March 6. If approved, the matter will be forwarded to the full City Council for a vote.

(Tim Deegan, is a civic activist whose DEEGAN ON LA weekly column about city planning, new urbanism, the environment, and the homeless appears in CityWatch. Tim can be reached at [email protected].) Edited for CityWatch by Linda Abrams.