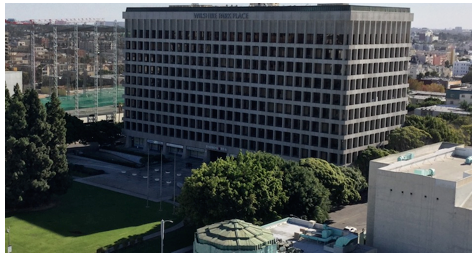 DEEGAN ON LA-One man’s lawn may be another man’s landmark. That seems to be the proposition being advanced concerning Koreatown’s Liberty Park, a large 2.5-acre swath of green separating Wilshire Boulevard from the 1967-built Beneficial Plaza building, an 11-story Late Modern office building that was set back 315 feet from the roadway to create the green open space.

Joseph N. Mitchell, president and CEO of Beneficial Insurance, the original developer of the property, created this “vest-pocket” but private park in 1967. He explained to the Los Angeles Times that it was “much more realistic and useful to strengthen the central city, to beautify it, to make the city a positive influence, the center of culture as well as of business.” However, he kept the ownership title to the park property.

Fifty years later, as the city densifies, the lure of so much open green space, in a prime location smack in the middle of Koreatown, almost begs to be developed. And attempts to do so are now being made, imperiling Liberty Park. It would become the footprint for a 36-story building with 506 residential units and ground floor retail. By comparison, the Beneficial Plaza building that it will overshadow is only 11 stories high.

A formal request and application for Historic-Cultural Monument status for Beneficial Plaza (now known as Wilshire Park Place), a Late Modern style office building, and the adjacent 2.5-acre Liberty Park is now being considered by the City’s Cultural Heritage Commission. Nobody denies the integrity of the office building that has not changed one bit since opening; it is worthy to be a landmark, says the City’s Planning Department recommendation.

Looking at Beneficial Plaza from Wilshire Boulevard brings to mind the mid-60’s era. Walking through its pristine, never-altered period lobby is like being in a very enjoyable time warp. Liberty Park, with its grove of Canary Island Pines, is a welcome break from the high density of Wilshire Boulevard in this section of already highly densified Koreatown, one of the densest neighborhoods in the city.

But, what about the lawn, named Liberty Park on the 4th of July in 1968 in honor of the Liberty Bell replica that was unveiled and still sits on the plaza at the office building entrance? There is the tug of war between some community members and the property owner Jamison Services. The city’s Cultural Heritage Commission met October 5 and unanimously voted to consider the Beneficial Plaza building and Liberty Park for Historic-Cultural Monument status.

Garrett Lee, President at Jamison Properties, and who runs the company’s development department, was direct about their development intentions, telling CityWatch, “The area in front of the building is not public open space, but private property with a plaza for an office building. The proposed project will leave the existing office building intact without any demolition. Our proposal to create a mixed-use building will help meet City goals by providing needed housing near one the City’s busiest transit stops at Wilshire and Western.”

Commissioners at the hearing took another approach, led by Commissioner Barry Milofsky, AIA. He noted that the Beneficial Plaza building and Liberty Park together sit directly across Wilshire Boulevard from Ahmanson Plaza, now known as Wilshire Colonnade (itself a pair of buildings with a huge open public courtyard between them,) provide a rare “combination.”

He went an additional step by urging community activists to also propose Ahmanson Plaza/Wilshire Courtyard for landmark status. Is this a clue as to what the commissioners may ultimately decide about the status of Liberty Park? Most people already appear to agree that the Beneficial office building is worthy of landmark status.

The Commissioners are faced with a unique question: the severability of a proposed Historic-Cultural Monument -- separating the lawn from the building. Community activist Annette Van Duren, leader of Save Liberty Park told CityWatch, “in 1968, the City Planning Commission voted to protect Liberty Park from future commercial development by downzoning it from commercial to parking. The city viewed Liberty Park as an exceptional open space asset 50 years ago. There is widespread interest in seeing this exceptional property protected. The Cultural Landscape Foundation, the Los Angeles Conservancy, the Jewish Historical Society of Southern California, and noted local landscape architect Mia Lehrer have all weighed in with letters of support.”

Van Duren added, “This is the only open green space around besides MacArthur Park and La Cienega Park. It has a lawn and tree area designed by noted landscape architect Peter Walker. If this open space is taken away, it will never come back. This is a great opportunity for Jamison to turn 180 degrees and be part of the community and honor the legacy that was established 50 years ago. They could name the park after Dr. David Lee, who owns Jamison Services.”

As generous as his gesture was, to provide a green open space in front of his office building, Joseph Mitchell never deeded the Liberty Park space over to the City as a “park.” He knew it would hold future value for him and his heirs or whomever he sold the building to. As disappointing as it may be to lose the vistas of and from this outstanding Late Modern building that will be blocked by the new skyscraper, preventing the development of private property is hard. Yet, it is still possible to challenge it and an award of Historic-Cultural Monument status for Liberty Park may change the conversation.

Jamison’s Garrett Lee emphasized that, “Although some community members do not want the private land to be redeveloped, we have heard from many community members that support development at this location. We will continue to work with the city and community and we welcome public input as the approval process moves forward.”

Now, it’s up to the Cultural Heritage Commissioners to delve into the issue and make a decision that may be worthy of Solomon: will they cut the property in half and protect the building but not the park, or will they tilt toward Commissioner Milofsky’s “combination” with Ahmanson Plaza and protect both the building and the park, giving the community an open green space and correspondence with Ahmanson Plaza? After a site visit and another hearing, their recommendation will go to the City Council’s Planning and Land Use Management (PLUM) committee for consideration, and ultimately the full City Council for a vote.