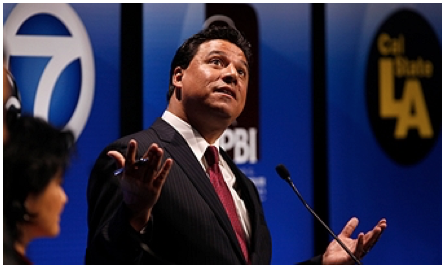 SKID ROW- Last week, an article in the LA Weekly titled “Who Killed the Skid Row Neighborhood Council?” shed even more light on the still-unfolding plot to prevent a Skid Row NC from becoming a reality. The plot, involving numerous “players” in Downtown politics, was first discovered when a cheating scandal by the opposition was uncovered and after months of “digging for gold”, now new revealing words found in the LA Weekly article confirm the shenanigans included City Hall, which allowed online voting less that two weeks before the April 6th subdivision election in which Skid Row attempted to break away from the Downtown Los Angeles Neighborhood Council to form it’s own neighborhood council. (Photo above: Los Angeles Councilman Jose Huizar.)

Said article quoted Rick Coca, City Councilmember Jose Huizar’s spokesperson, who referred to City Council file 15-1022(S)(2) (an amendment to CF 15-1022) which in and of itself is a motion to temporarily ban ALL online voting for NC elections citywide. Anyone familiar with this motion knows the City’s embarrassing rollout of its online voting pilot project related to the horrendous events connected to the 2016 Studio City NC election which led to the creation of said amended motion to begin with.

This amendment allows for the reinstatement of online voting pending a favorable report back from Department of Neighborhood Empowerment (DONE) and approval by the full City Council.

While Coca spoke correctly that this amendment was moved in December of last year (December 2nd to be exact), to imply that this was done to pave the way for Skid Row’s election is complete HOGWASH because Skid Row didn’t even completely turn in it’s subdivision application until December 19th (a deadline established by DONE) so how could Huizar (who seconded the amended motion) know IN ADVANCE that Skid Row would complete its application process?

Or know in advance that DONE would approve Skid Row’s subdivision application on January 11th and the very next day January 12th (according to information obtained in Michael Kohl Haas public records act requests) several prominent Downtown business leaders would demand a meeting with Huizar to discuss their concerns regarding the need to implement online voting. Wait! He knew they were coming months before they actually did?

Also, if Huizar knew all these things in advance (think: December, 2016), why did he wait until 13 days before the election to finally allow online voting?

I would say this is laughable, but in reality it’s really not!

Further, both the original motion and the amended motion speak to online voting as “one body” and nowhere does it state (or imply) that at any given time a single election’s online voting process can be extracted from the “body” (Is this even legal?). In fact, the amended motion (2nd paragraph, 3rd sentence) specifically speaks to “widespread implementation”.

This is one place where the Skid Row Neighborhood Council- Formation Committee points to and shouts “Discrimination!” as they continue to pursue legal representation.

Even further, when CD14’s Coca is quoted in the Weekly article speaking to “pop-up polls” being a positive voting option that allowed for “increased voter turnout”, apparently Huizar completely disregarded the original Subdivision ORDINANCE (184526) Section 22.819, subsection (b), 1st sentence, which states “The Department (DONE) shall conduct an election WITHIN the boundaries stated in the subdivision petition…” So which is the more dominant legal governance- a motion or an ordinance? And NO, the motion was not an amendment to the ordinance. It was an amendment to another motion.

And with Skid Row and homelessness exploding with double-digit increases, there’s NO reason why Skid Row should fear political retaliation from Huizar or his allies … because they obviously aren’t doing anything for Skid Row to begin with. So, what do we have to lose!

(Jeff Page … aka General Jeff … is a homelessness activist and leader in Downtown Los Angeles. Jeff’s views are his own.)