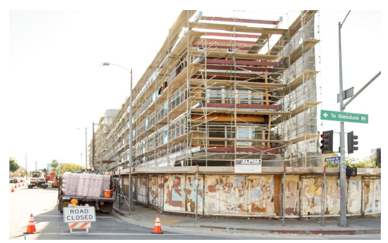 PLATKIN ON PLANNING-When you are hammer, the whole world looks like a nail, or in the case of the City of Los Angeles, when you are totally wedded to real estate speculation, you only have one hammer, up-zoning to fix all urban ills/nails.

But, there is a catch. Someone has to contrive a connection, however fanciful and unproven by subsequent monitoring, hard data, or serious research, that reducing regulations (i.e., up-zoning) on real estate projects miraculously fixes __________ (You fill in the blank.)

Let’s look more carefully at how this slight-of-hand works. In previous columns I have explained the flaws in these zoning fixits for several pressing urban problems:

Nail #1: Homelessness. Want to reduce homelessness is Los Angeles, then make it easier for developers to build market-rate apartments when and where they want by allowing spot-zoning. This argument was skillfully used to defeat Measure S, but there was not a shred of evidence that more luxury housing creates affordable housing. Now, four months after the election, this is still an empty claim, and stories about trickle down and supply and demand remain urban legends. The obvious solution, restoring Federal public housing programs and local CRA subsidies for affordable housing projects, were ignored, while new local real estate fixit programs, especially linkage fees and a value capture ordinance, are stuck at the starting gate.

Nails #2 and #3: Transit and Gridlock. Want to increase transit ridership and also reduce traffic gridlock, then build more market-rate apartments. Just up-zone everything within a half mile of an express bus stop, express bus corridor, and subway station through transit priority zoning. Once those half-mile radii intersect, these revised zones cover nearly all of Los Angeles between downtown and Santa Monica. In effect, this is an enormous real estate scheme that supplants today’s embarrassing, cumbersome, lot-by-lot, pay-to-play spot-zoning and spot-planning City Council ordinances with wall-to-wall Transit Priority Areas in which nearly all tenants – old and new -- still drive their cars.

This great theory is now being put into practice for the three new Purple Line Extension subway stations: Wilshire/LaBrea, Wilshire/Fairfax, and Wilshire/LaCienega. When I have asked METRO about including the full range of standard station area amenities at these locations, such as Kiss ‘n Ride, Park ‘n Ride, bicycle infrastructure, drop-off points for bus and taxi/Uber/Lyft passengers, basic services for passengers (e.g. newspaper racks, snack bars), and improved sidewalks and signage for pedestrians, the METRO staff shrugged their shoulders. They told me METRO just builds the subway, and these doo-dads are the responsibility of the City of Los Angeles.

City Planning then eventually stepped in to fill METRO’s vacuum with their universal fixit: up-zoning. They intend to apply new re:code LA zones to all properties in the vicinity of the Purple Line Extension subway stations. While there is always a chance that City Planning will pair them with unfunded streetscape guidelines, similar to those they drafted for the Expo line stations, this is just speculation.

Standard amenities for old and new subway systems around the world are not in the works for these Purple Line Stations, such as new on-site parking lots, drop-off facilities for bus and car passengers, on and off-site amenities for bicyclists, or even bathrooms. Of course, the public improvements that would make it easier for people to walk to and from these subway stations are also missing in action: enhanced street lights, smoother and wider sidewalks, safer crosswalks, ADA curb cuts, extensive tree planting and landscaping on public sidewalks and parkways, and wayfaring signage for pedestrians and drivers.

As concluded many years ago by sociologist Alan Whitt, the real purpose of mass transit in LA was to revive aging urban real estate, not move people. These current planning exercises totally vindicate his previous findings about the early years of MetroRail.

Nail # 4: Urban Design. Want to improve the appearance of Los Angeles, then ease up on zoning regulations so real estate speculators can build high density apartments and mixed use buildings. Yes, this is the essence of the proposed North Westlake Design District Ordinance, a specific plan for the old neighborhoods north of MacArthur Park. The local residents might be poor and the storefronts down market, but they are located within a half-mile of the Red Line subway station at Seventh and Alvarado. More importantly, the entire specific plan area is in the shadow of downtown LA. This is the real estate equivalent of a weekend prospector striking a vein of gold in the Sierra Nevada’s long after the California Gold Rush ended.

Now, please don’t get me wrong, I think there is plenty that Los Angeles could do to improve the appearance of the MacArthur Park and Westlake areas (and most of LA, to boot.) But, none of these public improvements appear in City Planning’s proposals, and there is little chance they will materialize in the future.

Nevertheless, to quote Leonard Cohen, nearly everybody knows how to improve the appearance of a neighborhood, like the North Westlake area. For example I recently drove down many streets near this specific plan area with a friend who moved abroad decades ago. He told me how ugly he finds Los Angeles. For much of the city, including this area, he is spot on, but there are obvious fixes, and they have little to do with zone changes. For example, most streets, including major corridors, are nearly treeless. Planting trees is not only an easy fix, but it is also essential to mitigate and adapt to climate change.

After tree planting, the endless overhead wires for electricity and telecommunications should be undergrounded, just like LA’s street light wiring was undergrounded years ago. After that, LA needs to get rid of those plug ugly billboards and super-graphics, as well as the illegal and bootlegged signage that visually pollutes nearly every commercial center and corridor, including North Westlake. Finally, the public rights-of-way, especially empty lots and alleys, need to be cleared of junk and unapproved street uses.

Yes, everybody knows, which leads us to the obvious question: why are these public programs and actions missing from the proposed North Westlake Design District? Just a silly hunch, but could it be that none of these obvious fixes promote real estate speculation? Nah, couldn’t be.

Nail #5: Pedestrian Enhancements. Another goal of the proposed specific plan/design district is to enhance the pedestrian experience. Like, design, this, too, is not complicated, especially since many design improvements, like repairing the public rights-of-way, are a twofer. After all, LA needs to fix this area’s sidewalks and curbs. They need ADA curb cuts, as well as re-poured broken sections and crosswalks. And, whenever possible, the sidewalks should be widened, and like design upgrades, planted with appropriate boulevard trees to create a shade canopy for walkers. Other pedestrian improvements have been completely worked out in many other cities and can be easily copied here: better street lights, especially for sidewalks, zebra stripes for all cross walks, and pocket parks and playgrounds adjacent to rights-of-way.

Some apologists for City Hall might argue that these many public improvements add up to real money – even if for a subway portal or specific plan area -- while zone changes cost the City nothing and may even generate tax revenue and campaign contributions. All true, but I doubt the real reasons for excluding these public improvements from official plans and local ordinances is financial. After all, there is no shortage of big-ticket items for which the necessary funding easily appeared, such as $1 billion to upgrade the Tom Bradley terminal at LAX and the $1.5 billion allocation to widen the I-405 freeway.

Furthermore, the cost of these local capital projects is just a rounding error when compared to truly expensive public projects such as the Federal government’s bank bailouts during the Great Depression. According to Forbes magazine, their cost was an estimated $16.8 trillion.  And, let’s not forget the ongoing Iraq and Afghan Wars, whose projected costs have so far reached $6 trillion dollars. This is more than enough money to fix the entire infrastructure deficit of the entire United States twice over, and this money could easily cover such “exorbitant” local public projects as planting trees throughout Los Angeles or at specific Purple Line subway stations, or forcing the removal of illegal billboards and supergrahics in the North Westlake Design District.

In other words, the underlying issue is not tight financial resources, but public priorities and public policy. Instead of endless “just no money” excuses for neglecting essential non-zoning municipal actions, like fixing sidewalks, enforcing codes, picking up junk, and planting trees, we need to divert public resources from bailing out Wall Street real estate scammers and funding foreign wars to long neglected public infrastructure and services.

(Dick Platkin is a former L.A. city planner who reports on local planning issues for CityWatchLA. Please send any comments or corrections to [email protected].) Prepped for CityWatch by Linda Abrams.