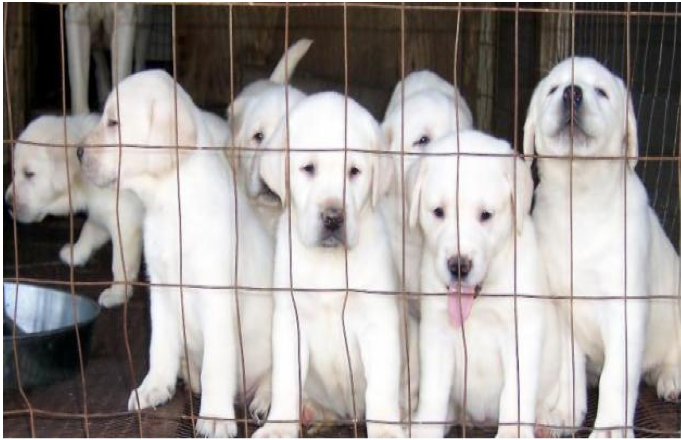 Opponents on the Council were Mitch Englander, who noted there are no resources for enforcement and that LA needed to concentrate on "core services," and the late Bill Rosendahl, a vocal lover of purebred dogs.

One small pet shop owner in Koreatown told The Times she has been selling mostly dogs from local breeders and that the ordinance is "misguided and unfair," adding, “If we were getting puppy mill puppies that were sick we wouldn’t have stayed in business this long."

Soon after the its passage, complaints were made at LAAS Commission meetings by a key supporter of the ban about a surge in Internet purchases of puppies -- a matter over which the City and State have zero control.

And, as Easter approached, ardent rescuers emotionally testified about the rampant, unabated street sales of bunnies in the downtown garment district.

HAS THE INTERNET REPLACED PET SHOPS IN LA?

On June 3, 2017, an Internet search showed 1,004 private and commercial ads in the Recycler for puppies in the Los Angeles area, priced from $450 to $3,500. Some sellers said they could provide pups of various breeds, indicating a puppy broker or mass-breeding operation. None in the first few pages mentioned AKC registration.

Craigslist that day showed total ads for Los Angeles available pets (puppies, kittens, dogs and cats) at 1,998 -- some advertised as purebred, but of dubious origin.

A search for "pit bull breeders in Los Angeles" showed the disturbing figure of "about 909,000 results." Of course, not all were breeders. Some offered "stud service" and other options. But the overwhelming numbers of puppies and upcoming “breedings,” kennel names, and descriptions of the animals (which are not included here in order to avoid advertising them further) were chilling.

The irony -- and hypocrisy -- of the "puppy mill pet shop ban" is that anyone can get a breeders' permit for a dog from LA Animal Services by merely paying $235, plus $100 for an intact dog license/permit. (Cats are not licensed by the City, but the LAAS website shows a required "in-tact "permit, plus breeder's fee.) Or they can breed and sell pets without a permit without much fear of penalty.

Also, breeding permits are issued without a zoning requirement or premises check.

The City's Finance Office advised me that it does not enforce the requirement for a business license unless someone complains or they are notified by the State of possible unreported earnings.

According to Brenda Barnette's Woofstat report for February 2017, breeders' licenses sold by LA Animal Services increased by 44% from 466 to 669, and increased by 71% from the same period last year.

This makes the reported closing of 11 small pet shops in LA -- which were subject to the lengthy and detailed CA Health & Safety Code § 122350 - 122361, plus the stringent Polanco,-Farr, Lockyer Pet Protection Act, and Penal Code Sections 597 and 597.1U -- seem a paltry solution to LA's pet-overpopulation problem.

This is especially true since existing pet shops could merely board up their windows, transform to Internet puppy-sales brokers, and avoid all inspection or regulation by the City or State.

When Mayor Eric Garcetti reappointed Brenda Barnette as General Manager of Los Angeles Animal Services he was fully aware of her background as a dog breeder. In a June 18, 2010, interview, Barnette told the LA Times: "I'm a member of the Seattle Kennel Club." She also confirmed holding the position as the Seattle Legislative Liaison for the AKC.

Barnette openly admitted her fondness for purebred dogs, and some local breeders attended LAAS Commission meetings to indicate their approval of her selection as GM. According to the LA Times report, she stated that, "...she owns a Portuguese water dog that lives with her 30-year-old daughter." And that she has "...bred the water dog but not in a long time." She added, "I have shown dogs, and you may see me at a show."

But, in late 2013, (a year after the pet shop ban) Daniel Guss, Los Angeles writer and animal advocate, told the City Council during public comment that he had come across a dog show roster dated May 23, 2013, in which Brenda Barnette and her daughter Mary Alice Davis (an employee of Best Friends Los Angeles) were in the competitions at the Southern California Portuguese Water Dog Club, under the listing for “Puppy Bitches" and he produced the following records:

On October 4, 2013, he addressed the issue directly to Brenda Barnette by e-mail advising her, "Breeding dogs is incongruous for a shelter GM, and your failure to have a breeder's permit (when you are a listed owner) is a violation of city law.”

Amidst Guss’ insistence that, without a breeding permit, Barnette “MUST RESIGN IMMEDIATELY,” she responded on Oct. 4, 2013 at 4:23 PM that she was just a co-owner of the dog and, "Being a Co-owner of record is more like  being a G= uardian [sic] of anything happens to my daughter. The dog does not live with me, - is not suported [sic]by me nor controlled by me.”

Best Friends, one of the nation's champions of puppy mill pet shop bans, responded to Guss' inquiry to them, providing this explanation in an October 8, 2013 e-mail from Marc Peralta, Executive Director of Best Friends Animal Society – Los Angeles:

“While Best Friends always advocates adoptions from shelters or rescues for those looking for a pet, we do acknowledge that there are responsible and caring breeders (with definitions attached.) Mary Alice falls into the category of responsible breeders." (Emph. added)

In October 2016, Louis Dedeaux, a long-time LA Animal Services' employee, was appointed by Barnette as Interim Assistant General Manager. Ironically, a lengthy interview with Dedeaux about his Rottweiler, Honcho de Dedeaux, appeared in Vicki Hearne's book, Animal Happiness  (2003). In it he states that he bred Honcho and at that time had been breeding Rottweilers for eleven years. Hearne comments, "Honcho, incidentally, is on his way to a breed championship." And, "Dedeaux gets calls for his Rottweilers from celebrities because his dogs are well known."

Within months after supporting an ordinance to prohibit any pet stores from selling puppies, kittens, dogs or cats from puppy mills or local breeders and a mandate that all dogs and cats sold in any pet store must be "rescued" or shelter animals, Brenda Barnette, issued a report on June 23, 2013, recommending that the Department:

Make dogs in late-term pregnancy available to New Hope partners or fosters, and:

(1) Prohibit third-trimester spaying if a foster is available; and

(2) New Hope partners (rescuers) could serve as foster volunteers for the Department for the pregnant mother and subsequent litter.

In her Fiscal Impact statement in the report, Barnette contends:

“Fostering puppies until they are eight weeks old, and returning them to Animal Services to be adopted out, represents additional revenue opportunities through adoptions to the public or through pet shops."

However, urged by frantic rescuers and activists who had worked passionately for years to pass legislation requiring all shelter animals to be altered and stop unnecessary litters, Councilmember Paul Koretz interceded, stating that he did not approve of this policy.

Barnette has admitted at several recent Commission meetings that hoarding cases are up in Los Angeles, and several media-reported incidents were rescuers -- one notably receiving animals from LA City shelters had 65 sick and old dogs in her home.

There is no monitoring or operational control of retail rescue pet shops/kennels locally nor statewide, such as the aforementioned Cal. Health & Safety Code § 122350 -122361, which was crafted by Sacramento lawmakers to strictly regulated commercial pet stores.

While responsible rescues are vital to Los Angeles, an investigative report, Some So-Called Nonprofit Pet Rescues May Not Really Be Charities, by David Goldstein of CBS News revealed that Saving Spot Rescue, an alleged 501(c)3 dog rescue, which claimed to be non-profit, was found not in good standing either with the IRS or CA Attorney General.

Sales prices (called "adoption fees") charged by rescues also vary widely and are not limited by law. The animals may be from a local or out-of-area shelter, or imported from another state/country.

The website for Beagles & Buddies in Apple Valley, shows, "A donation is requested as well as a signed adoption contract. Donations range from $150 - $750 depending on the age and breed."

The Bill Foundation in Beverly Hills states, "We suggest a minimum donation of $350. Look into your heart, if you are able to give more, please do."

"In general adoption fees range between $350-$750 for dogs and $150-$500 for cats, but adoption fees may increase or decrease in certain circumstances (for instances when donors sponsor all or a portion of an adoption)."

SHOULD THE PET SHOP/PUPPY-MILL BAN BE EXTENDED STATEWIDE?

Assembly Bill 485 just passed the State Assembly. Introduced by Assemblyman Patrick O’Donnell (D-Long Beach) it is aimed at cracking down on commercial breeding facilities or puppy mills (most of which are located in the Midwest.)

It would mandate that pet stores statewide acquire dogs, cats and rabbits only from a public animal-control agency or shelter, the Society for the Prevention of Cruelty to Animals, the Humane Society or a nonprofit rescue or adoption organization that cooperates with one of those agencies.

"The bill proposes punishing pet stores that continue selling animals acquired from breeders with infractions and misdemeanors. Pet store owners would be guilty of a misdemeanor starting with their third offense," reports CalCoast News.

Many of us never have, and never will, consider owning anything but a shelter dog, but we must accept that there are individuals and families with a preference for certain behavior or physical characteristics, or who have small children and/or other pets and desire to select a puppy of a specific breed with assurance of its health guaranteed by law (see the CA Puppy Lemon Law).

Best Friends also takes this into consideration. While affirming its opposition to pet mills, Best Friends Animal Society acknowledges on its site that there are some who want to purchase a pet from a breeder. It offers "references to help inform such a decision."

The Los Angeles "Puppy Mill Pet Store" ban was well intentioned, but it is an experiment that appears to have failed miserably and merely caused puppy purchasers to resort to the uncertainties of the Internet, Craigslist, and out-of-state breeders, while CA has some of the strictest breeder and pet shop regulations in the country. The failure to enforce existing laws cannot be remedied by merely rearranging the offenders.

Should lawmakers allow local, highly regulated, breeders to offer pets in commercial locations in communities if they wish to do so?

If AB 145 is passed by the Senate, based upon the Los Angeles experience, will Governor Jerry Brown, who in 2016 lost his adorable 13-year-old Pembroke Welsh Corgi, Sutter, (owned by his sister) and replaced him with a Borgi puppy -- a "Designer Dog" mix of Border Collie and Corgi from Red Bluff, CA -- sign this bill into law and further add to the hypocrisy?