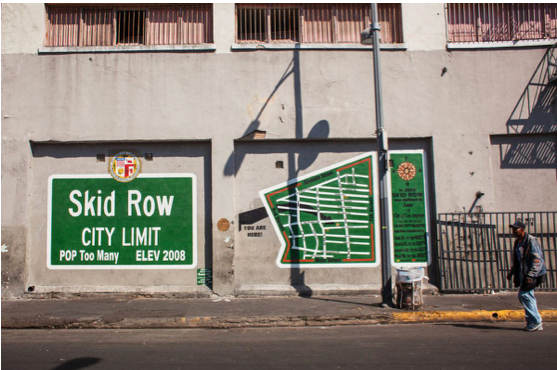 SKID ROW- (Editor’s Note: The Department of Neighborhood Empowerment did not respond to attempts by CityWatch to authenticate the charges made by the author of this article. The views expressed in this article are those of the author and do not necessarily reflect those of CityWatch.) Last week, there was an historic election of sorts in Downtown Los Angeles. The many historic moments start with the first-ever subdivision election in the history of the city.

The Skid Row Neighborhood Council- Formation Committee, which began their formation effort in June of 2014, squeaked by the community of Hermon, who started their effort in 2011 and held their subdivision election two days later.

While Hermon’s election was successful and went off without any hitches (beyond opposition from the larger Arroyo-Seco NC), Skid Row’s history books will forever overlook their election which was held in a physical polling place in Skid Row (with online voting becoming a last-minute additional option less than two weeks prior to the election day) and also had an energetic and well-attended “Uplift Skid Row Pep Rally” directly across the street, and instead will focus on the “Scandal in the Skid” which was originally leaked by an anonymous source connected to the Downtown LA Neighborhood Council (DLANC) who forwarded damaging e-mails to the Skid Row NC- Formation Committee, who initiated Skid Row’s bid to create a new NC that would’ve broken away from the DLANC and addressed it’s myriad issues directly with City Hall’s resources.

The irrefutable evidence pointed out that DLANC created a front organization called “Unite DTLA” which then forwarded “Vote NO on Skid Row Separation” campaign materials to DLANC’s entire database via e-mails that connected directly to a DLANC-controlled URL, which is illegal by City regulations. It was also discovered that Unite DTLA also used DLANC’s mailing address- which is paid for by the City’s NC Funding System (taxpayer funding), and thus also a violation.

The Skid Row subdivision election’s preliminary results saw Skid Row NC losing by a slim 62-vote margin. DLANC’s database registered at least 700 potential voters from their 2016 NC elections. This entire database was automatically registered in Skid Row’s 2017 subdivision election. Easily, the “NO” position e-mails (publicly stated by a current DLANC Board member on social media to have been sent “four times a day”) may have influenced 62 of their 700 voters, and possibly more.

This week, the Skid Row NC-FC officially filed multiple actions, which include a recount (there are provisional ballots that have yet to be counted), a grievance against the DLANC and 5 separate challenges all filed with the City’s Department of Neighborhood Empowerment (DONE).

If DONE accepts any of the challenges, an independent grievance panel will be formed with a possible decision coming no more than 14 days from it’s convening.

If each of the challenges are dismissed, the Skid Row NC-FC has indicated that they will explore all possible options, including “legal options” which imply the possibility of at least one lawsuit, possibly naming both DLANC and the City of Los Angeles.

This unfortunate turn of events takes away from a tremendous and unexpected turnout in which over 760 voters voted in favor of creating a Skid Row NC and over 1600 overall. Even rap superstar Ice Cube and dozens of Hip-Hop artists recorded cell phone videos urging qualified voters to “Vote YES for the Skid Row NC” which formulated from a #HipHop4SkidRow social media campaign.

With all this momentum, Skid Row was able to organize and activate a newly-established voter base that could have been much larger, but there are also claims of voter suppression, which may be addressed after the pending challenges through DONE. The oldest voter in support of Skid Row’s effort was a 96-year old Skid Row man who beamed with pride for his community.

Still, DLANC’s devious acts overshadow Skid Row’s glory and a revealing video released on social media exposes an even greater concern of how people outside of Los Angeles will view this controversial election.

Will the City of Los Angeles’ image, which prides itself on being diverse, inclusive, progressive and a “sanctuary city” be tarnished?

Will international tourists see Los Angeles in an unattractive light because of it’s inhumane actions towards it’s homeless residents?

Will the City’s 2024 Summer Olympic bid be negatively affected? Or the City’s effort to land the 2026 World Cup frowned upon?

Or will this simply be just a local community tussle over the control of Skid Row?

If the DLANC is to be punished, will it’s close ties to the powerful Downtown business sector be a factor in a soft “slap on the wrist”-type punishment? Or will the hammer be dropped to set an example of what will not be tolerated in any NC elections across the city?

There is a lot at stake and the pressure is already mounting.

It was reported that DLANC’s Executive Secretary stepped down this week. It is not yet known whether this move is related to the voting scandal, but surely the timing seems to come at a bad time.

Can DLANC, which is considered one of the better NC’s of the 96 NC’s citywide, overcome this still-unfolding drama where things will simply return to normal or will major changes be inevitable?

The Skid Row community is stunned and there is talk of the concerns regarding the possibility of long-term trauma, which would add to the many complexities associated with the area commonly known as “the homeless capitol of America”.

Will Skid Row residents cower behind the results of this election and collectively decide never to get involved in politics again? Or stand up to the powerful land-use developers who aim to gentrify the area where they live?

The results of DONE’s challenge review has great implications that will undoubtedly and instantly affect tens of thousands of Angelenos.

A Skid Row NC could be the missing piece in all the new Measure HHH and Measure H discussions involving billions of taxpayer dollars, which could give the necessary credibility to subsequent decisions on homelessness that the DLANC just doesn’t have.

Either way, history will again be made.

Skid Row NC-FC members strongly believe they are on the right side of history.

This will undoubtedly be a significant turning point in Los Angeles’ well-documented struggles to sufficiently handle it’s expanding homeless problems which include a lack of significant low-income housing, adequate storage facilities for homeless citizens and ineffective healthcare services for the ever-growing mental illness population and even help for those suffering in various states of addition.

The new Homeless Count numbers will be released by the Los Angeles Homeless Services Authority (LAHSA) at the end of next month.

The fight to create a Skid Row NC may still continue well past that.

It is unknown what solutions the “NO” voters have planned to address homelessness in Skid Row, if any.

Maybe they just got caught up in the moment of wanting to simply win an election.