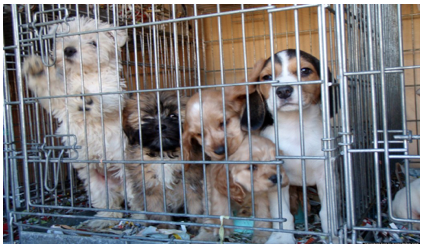 ANIMAL WATCH-When Assembly Bill 485, which banned pet shops from selling dogs, cats or rabbits other than “rescued" animals or face a $500 fine, was signed into state law by Governor Jerry Brown on October 13, it also created and legalized an entire new California industry, devoid of regulation and oversight. It seems that the ramifications were also not considered. Sacramento legislators basked in a near-nirvana moment of media attention and glowed in the hype that they were “saving lives” -- as if they had just solved a problem, rather than potentially creating one.

Passage of AB 485 requires that "pet shops" obtain pets from animal shelters, humane societies or "rescues;" however, it provides no definition or standards for "rescues" other than, "…a ‘rescue group’ is an organization that is tax exempt under Section 501(c)(3) of the Internal Revenue Code, and…does not obtain animals from breeders or brokers for compensation."

The passage of this bill placed "rescues" into the stream of commerce -- as a source of animals for a retail business -- with none of the legal provisions required of other “product” providers. Rescuers in California have no state regulation. They are not mandated to have insurance, background checks, experience prerequisites, or any other qualifications -- other than being a non-profit corporation, registering as a charity, and filing a 50l(c)3 tax form.

There are no requirements for knowledge of animal handling, behavior or health, and, yet, this bill infers "rescuers" are automatically considered “experts in this field."

Before this new "rescue" industry was unleashed, legislators should have clearly defined whether there is any limitation or health requirements for the importation of puppies, kittens, cats and dogs admittedly being brought from outside California by "rescues," since this bill is purportedly designed to decrease the number of unwanted and homeless animals in the state.

OTHER STATES THAT REGISTER RESCUES

More than 35 states have some form of regulation of shelters and rescues, ranging from simple registration to standards of care and that they require transparency. For instance, Massachusetts lists state-approved organizations online. Connecticut requires that any dog brought into the state for sale or adoption must be registered with the state and have health certificates for each animal.

After a rescued Pit Bull mauled a 90-year-old woman to death in May 2017, Virginia lawmakers are currently working on legislation to regulate animal (rescue) training centers. The incident occurred in May, right after Margaret Colvin's family adopted the dog, named Blue, from "Forever Home Rehabilitation Center." The family's attorney told WVEC that a lawsuit has been filed against FRHC for $5 million. Here's how he described the horrific incident to WVEC, "She saw her mother disemboweled, virtually, and, then, her mother’s arm had to be amputated, and her mother died. The room was just covered in blood, so she’s just not doing well.”

13News reported that former FHRC employees looked at legal documents after the deadly attack, and traced Blue’s path from New York to Virginia.

The VA State Department of Agriculture, which oversees animal control and safety laws, stated that there are no regulations in place to make sure that dogs are rehabilitated before they are released to the public, because "rehabbers are not inspected the way a pound or shelter would be.” All that is needed for out-of-state dogs to be transported into the state is a health certificate from a veterinarian and a rabies shot.

This lack of regulation means there is nothing in place to protect people from adopting a potentially dangerous or vicious dog.

State Senator Bill DeSteph said he is in the process of drafting legislation to make sure something similar to the situation involving Blue doesn't happen again, and he will introduce a bill to the General Assembly in January.

A sick puppy adopted from a NY rescue by parents "who chose to adopt to teach their child the value of rescuing," ended up a few weeks later, after $3,000 in veterinary care, dying painfully from distemper and had to be euthanized, the Democrat & Chronicle wrote on Aug. 27, 2017. The adopter discovered that the volunteer-based rescue had trucked the puppies from Texas (two of the puppy's siblings also died similar deaths.) New York’s Consumer Protection agency admitted that such groups were exempt from oversight by the State.

This and similar tragedies caused NY animal lovers to unite in pushing for a new law to provide State oversight of nonprofit pet adoption groups to stop shoddy health care and record-keeping and to uncover unscrupulous puppy-mill pet dealers rebranding themselves as “rescues.”

"New York’s lack of oversight has spawned a brisk trade in puppies shipped from southern states and overseas to the Northeast, where the local supply has been reduced by aggressive spay-and-neuter programs and bans on pet store puppies supplied by breeders," an official stated.

The law, signed by Democratic Gov. Andrew Cuomo on August 15, 2017, puts nonprofit shelters and rescues under the same state Agriculture and Markets regulations that cover licensed pet dealers and municipal shelters. The new NY law requires the organizations to register with the agriculture agency, follow state documentation and vaccination requirements and disclose the number of animals transported annually. It also gives the agency the authority to craft additional regulations.

“This new law is the beginning of an attempt to find out who the bad actors are and formulate standards that everyone will have to live by,” said Libby Post, executive director of the New York State Animal Protective Federation, which represents municipal shelters.

GEORGIA REQUIRES A LICENSE TO BECOME A 'RESCUE'

Becoming an animal rescuer in Georgia requires an “Animal Shelter License," issued by the Georgia Department of Agriculture, which includes:

--A "pre-license inspection" compliance with local ordinances, including the limit on the number of animals in the city or county ordinance and incorporation in the state as a non-profit organization.

--An inspection to ensure compliance with the Animal Protection Act. If foster homes are to be utilized, documentation of all fosters must be given at the time of the initial pre-license inspection. A foster home agreement must be signed by each foster head and the primary license holder is responsible for performing two annual inspections on each foster. The primary license holder will be held responsible if they are found to be in non-compliance with local ordinances.

--Licensed animal rescuers are not allowed to pick up stray animals. Animals must be obtained by relinquishment by a legitimate owner (in writing) or acquired from a licensed animal shelter.

In 2012, Ohio lawmakers passed a bill aimed at regulating large-scale dog-breeding operations and improving the lives of animals in “puppy mills.” The law also requires the numerous rescue volunteers who foster unwanted animals to register with the State and face inspection if a complaint is lodged against them.

There was a reason the legislation includes rescue organizations as well as breeders, an Ohio Dept. of Agriculture official said, "Several years ago, the ASPCA came into Ohio and did a rescue in Clark County. We had to intervene and close down a hoarding operation. Sadly, as many as one-quarter of animal hoarders call themselves rescues."

Paws With Pride founder and director Janice Mayfield, who has been involved in animal rescue for 25 years, said her agency re-homes about 200 animals a year using a foster care system, and added, “If you are a good, legitimate animal rescue, it shouldn’t affect you at all. If someone is doing something they shouldn’t, they should be stopped.”

ALL RESCUES ARE NOT EQUAL

But Los Angeles just experienced an example of hoarding at Lucky Puppy Rescue, the first "retail rescue" adoption center established under the Councilman Paul Koretz' ban on "mill-bred" dogs and cats. In May 2016, almost 70 dogs were found in the home of Lucky Puppy Rescue owners Rachel Kennedy and Sandra Vasquez, who were convicted of animal abuse and negligence.

California lawmakers have bestowed on ANY person or group that can file the form to become a “rescue” the status of providing (product) animals to "pet stores" or engaging in "Retail Rescue" adoption centers, which are merely stores providing adult animals while avoiding the rules and scrutiny of established "pet stores" and local animal limits. Incumbent in the lawmakers' action is a greater obligation to assure that the State oversees "rescues" in the same way it enforces rules and regulations for other product suppliers and does not exempt them from the same obligations to protect public and animal welfare.