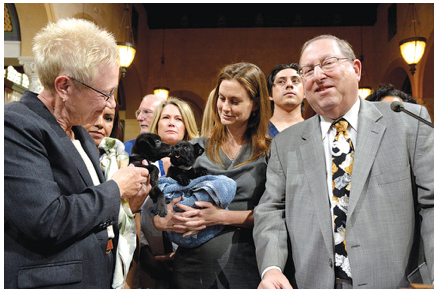 ANIMAL WATCH-Councilman Paul Koretz and his protégé, Councilman Bob Blumenfield (CD3), quietly introduced a motion on October 27 (CF 17-1237, Kennel / Delete Definition) in an apparent attempt to help Mayor Eric Garcetti, and LA Animal Services General Manager Brenda Barnette reach their "No Kill" goal. This latest plan would remove authority of Zoning and Code Enforcement over "kennels" in the LA Municipal Code and, along with the exemptions of the "new-model" pet shops, could permit an unlimited number of surplus impounded pets – likely, cats and Pit Bulls -- to be relocated in “rescues” in residential, as well as, commercial zones citywide.

Best Friends Animal Society has repeatedly announced that the goal of "No Kill" -- "forever" homes for all adoptable animals in city shelters -- will be reached by the end of 2017. If that's true, why would the deletion of an LAMC dog-limit code (also used for cats) that has historically protected families, homeowners, renters and businesses from exposure to toxic waste, barking/noise and contagious animal diseases that emanate from dog and cat kennels be necessary, or sought – again -- by Councilman Paul Koretz?

Existing kennel codes prohibit maintaining four or more dogs and cats (eight adult animals, plus an unlimited number of puppies and kittens under four months) within 500 feet of homes or businesses and only in an M-l Zone -- or in other zoning with a Conditional Use Permit (CUP), which prescribes mitigating measures to protect residents and pets in surrounding properties.

The new "rescue retail" or any other pet shops are exempted from "kennel" definition/regulation (and the 500-feet distance.) Approval of this motion could mean that animal hoarding by “rescues” and possibly others would become legal in the city of Los Angeles, and it could happen next door to your business or home.

WHAT KORETZ/BLUMENFIELD PROPOSE TO DELETE IN ZONING CODE

Koretz/Blumenfield propose to REMOVE "Kennels" from Sec. 12.03 of the LAMC. This is the governing definition of "Kennels," used by LA's Planning-Zoning Dept., to provide safe, quiet neighborhoods, as follows:

The faulty rationale (as worded by Koretz/Blumenfield in their motion, CF 17-1237) is that, "In Section 12.16 of the Zoning Code, kennels are regulated in terms of which zones where they can be located."

Therefore, the intention is to have no zoning regulation of kennels under the Planning and Zoning LAMC Sections but only in Sec. 53.00, enforced by LA Animal Services.

However, Section 12.16 of the LAMC does not even mention “Kennels.”

A private land-use expert who reviewed this commented:

Two Council offices which don't even recognize poor grammar IN THEIR OWN MOTION decide that a non-existent LAMC Section in 12.16 should be removed! However, their intent is obvious -- they want to put dog and cat kennels anywhere, everywhere in the city. HOW MUCH SALARY FROM OUR TAXES IS PAID TO THESE TWO CLOWNS AND THEIR STAFFS?

JUDGE RULED CITY'S FIRST ATTEMPT WAS AN "ABUSE OF DISCRETION"

On February 10, 2014, a Writ of Mandate petition (BS14723) was filed in the case of "Daugherty v. City of Los Angeles".  The City's action was determined to be an "Abuse of Discretion" by Judge O'Donnell. In its ruling, the Court stated that the "City of Los Angeles Zoning Administrator’s Interpretation which excludes 'pet shops' from the definition of 'kennels' set forth in LAMC Section 12.03 (No. ZA-2013-3104-ZAI) exceeds the Zoning Administrator’s authority and is thus an abuse of discretion."

IS THE KORETZ/BLUMENFIELD MOTION 'DISHONEST'? - AN ANALYSIS

This new motion creates the exact same result as the Zoning Administrator's interpretation did, except, this time, it is going through the legislative process. However, this motion is dishonest in that it claims not to make any changes in the zoning placement of kennels. It says, "Doing so should in no way affect Zoning Code regulations as to where kennels may be located and under what circumstances." (Emphasis added.)

This exemption of pet shops merely prevents a new model "retail rescue" pet shop (with adult animals or puppy and kittens) from having to get both a kennel permit and a pet shop permit from Animal Services. That exemption in the zoning code would also prevent any regulation of the placement of unlimited numbers of animals.

If zoning codes exempt pet shops from the definition of a kennel, anybody with an unlimited number of dogs (or cats) that are for sale or adoption ("rescues") could exist anywhere -- next to schools, hospitals, etc., without regulation of any kind by zoning or code enforcement.

SAFETY/ZONING ARE NOT REGULATORY CRITERIA OF LAAS

Zoning considerations, such as the effect large number of animals have on neighbors, are not within the scope of the Animal Services' regulations -- which is the only agency that would have any power to restrict them at all. The regulatory criteria for Animal Services relate to the welfare of the animals within the facility, not the welfare of the neighbors who have to deal with the odor, noise, effluence and exposure to disease. Animal Services cannot deny the Pet Shop Permit because of the negative impact on the community. That is beyond their purview.

This proposal essentially limits the term "kennel" to a boarding or breeding facility. So, the identical community impact of a large number of dogs posed by two different businesses (boarding vs. selling) are treated differently by the City. Boarding regulated by the Dept. of Building and Safety and selling/adoption is not. A "new-model" pets shop can warehouse as many animals as it wants since it is selling them (offering adoption-for-fee). This is a major change in zoning. And, it could be considered discriminatory.

Two Los Angeles animal rescuers, Rachel Kennedy and Sandra Vasquez were sentenced on Sept. 29, 2017, after each was found guilty on one count of animal abuse and two counts of negligence.

The charges resulted from the May 6, 2016 raid of Lucky Puppy, alleged to be the first upscale Rescue-Retail shop in a highly visible commercial location under a 2012 ordinance related to Councilman Paul Koretz' LA "puppy-mill" pet shop ban.

The owner of the store on Ventura Blvd. had reportedly begun eviction proceedings after a neighboring business complained and moved because of the noxious odors from the Lucky Puppy store.

Prosecutor/ Deputy City Attorney Don Cocek stated that LA Animal Services personnel described the inside of the house as “a sewer, with the floors covered with urine and feces,” and that they, “could not breathe inside the building because of the unbearable smell of ammonia.” He said that the heightened potency of the toxic odor for the animals…"was horrific and subjected them to intolerable suffering."

According to GuideStar, Lucky Puppy Animal Rescue, North Hollywood, CA, started in 2011, and the current record shows Gross Receipts of $598,088.

One supporter of Lucky Puppy has commented at LAAS Commission meetings that Animal Services gave Rachel Kennedy "almost twenty" dogs just a week before the search and arrests, and that has not been denied publicly by GM Barnette. Could that have influenced the decision to overlook "hoarding" as a factor in this case?

Paul Koretz' has tried numerous times to increase animals in communities and met with resounding opposition by neighborhood councils, homeowners' associations, apartment-owners' associations, veterinarians and other animal-health professionals, and residents all over the city.

There is a list in the City Clerk's Office of his failed attempts to pass legislation without consideration of the noise/safety impact on neighbors and communities, and with little regard for the welfare of the animals he claims to love.

In January of 2013, the Superior Court ruled that the Los Angeles City Council “abused its discretion” when it overruled the Central Los Angeles Area Planning Commission’s denial of a zoning variance.... But why did Koretz take an interest in this minor zoning dispute?…. (U)sing the powers of the City to assist his cronies seems to be standard operating procedure for Koretz.

Is that what is happening now? If so, Bob Blumenfield should be aware that constituents are becoming smarter and more organized, and he may be following Paul Koretz to the end of a shortened political career.

If two highly paid Council Offices which intend changes to the LA Municipal Code that can have a serious negative impact on animals, humans and quality of life in communities can't get their own ill-advised motion crafted accurately, do they think voters won't notice?

Obviously, Angelenos are not as stupid as our elected officials think and, NO, we don't want to live next door to a dog/cat kennel -- no matter what you call it!