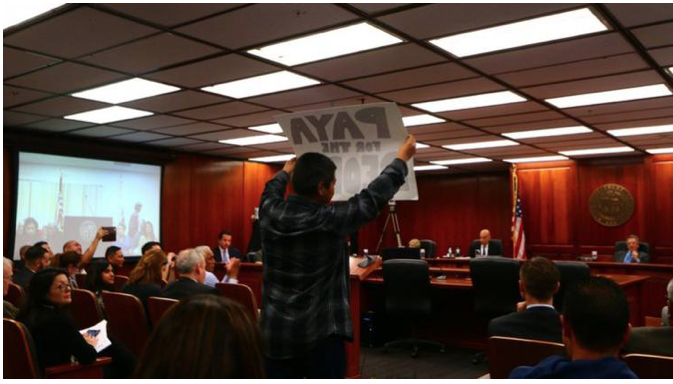 LA WATCHDOG--On Thursday, Mayor Eric Garcetti announced that the Department of Water and Power will “create an Office of Inspector General as part of his DWP reform agenda to improve accountability and transparency at the utility.”

The Mayor has also retained Dan Schnur, a well-respected USC professor, to “conduct a 90-day review of DWP’s internal processes and provide recommendations for incorporating the role an inspector general” into the DWP organization. (Photo above: DWP Board of Commissioners meeting.)

But the Mayor does not have to wait 90 days to make a significant change that will increase the Ratepayers and public’s trust in the beleaguered Department of Water and Power.  He can restructure the five member Board of Water and Power Commissioners.

DWP is a customer centric engineering and capital intensive enterprise with over 11,000 employees, annual revenues of $5 billion, assets of $28 billion, and long term debt of $15 billion.  Furthermore, DWP is undergoing a technically challenging and expensive transformation as the Power System will convert from a fossil fuel based system to 100% renewables by 2045.  At the same time, the Water System will be investing over $10 billion to recycle wastewater into 195,000-acre feet of drinking water (“toilet to tap”), representing more than a third of our requirements.

To oversee this massive transformation of this very complex enterprise, we cannot afford politically appointed allies of the Mayor and City Council to oversee the Department.  We need independent Commissioners who understand the organizational, engineering, information technology, financial, political, and public relations hurdles that DWP will encounter during this radical change and who are not afraid to express their opinions, no matter how unpopular with the Mayor and the City Council.

But independence and experience are not qualities that are appreciated by the Mayor and his chief of staff.

Just last week, long time Commissioner Christina Noonan was forced to resign because she refused to follow the dictates of the Mayor’s chief of staff and vote for the Mayor’s pet projects if they were not in the best interests of the Ratepayers and the Department.

In the spring, the very green Aura Vasquez was reportedly forced off the Board because of a conflict with the Mayor’s chief of staff.  She was replaced by the Susana Reyes, a Garcetti political ally who lacks the experience and expertise necessary to oversee the transformation of the Department.

In June of 2018, Bill Funderburk, a lawyer and an acknowledged expert on water issues, resigned after serving on the Board for five years, during which time he spent an inordinate amount of time solving contentious water issues, including those in the Owens Valley.  He was replaced by Cynthia McClain-Hill, a long winded, politically connected lawyer who has also lacks the necessary depth of experience.

Garcetti now has an opportunity to begin to reshape the Board, beginning with his appointment to succeed Noonan.  And with a little political maneuvering (or muscle) to transform the Board of Commissioners and the appointment of an independent and experienced Inspector General, Garcetti and, most importantly, the Department can start to regain the trust, confidence, and respect of Angelenos.