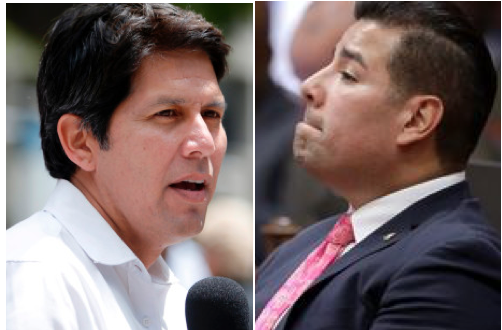 LA WATCHDOG--As a result of Raul Bocanegra’s resignation from the State Assembly, taxpayers will have to foot the bill for a special election to fill his seat.  This will more than likely include two trips to the polls, a primary and then a runoff, costing taxpayers an estimated $2 million, if not more.  And this does not take into consideration the distraction caused by this special election or the campaign dollars spent by the aspiring candidates. (Photos above: State Senators Kevin de Leon, left and Ricardo Lara)

This unnecessary expense should not be the responsibility of the taxpayers.  The burden should be shouldered by the perpetrator, Raul Bocanegra.

If Bocanegra is unwilling or unable to reimburse the government for this expense that was caused by his inappropriate behavior, then the cost should be borne by the Democratic Party whose leaders knew, or should have known, that Bocanegra was a predator.

Holding the Democratic Party accountable will send a loud and clear message to party leaders that they need to be on the alert for inappropriate behavior by their members and their staffs and that the Party will be held accountable for the leaders’ negligence and the misdeeds of its members.  This is the same logic that the State demands of the private sector and corporate executives.

This standard of holding people accountable for their actions would also apply to the Republican Party.

Two members of the State Senate, Ricardo Lara (D-Bell Gardens) and Kevin de Leon (D-Los Angeles), deserve to be singled out for their actions in tanking the extension of the California Whistleblowers Protection Act to the members of the Legislature and their staffs.

Over the last four years, Assemblywoman Melissa Melendez (R-Lake Elsinore) has sought to amend the California Whistleblowers Protection Act.  It passed in the Assembly without a dissenting vote.  But when it was sent to the Senate Appropriations Committee headed by Lara, the bill never saw the light of day.

Kevin de Leon was also complicate in burying this legislation that would have gone a long way in protecting victims of sexual abuse and punishing the predators.   As the head honcho in the Senate, de Leon was no doubt aware of the proposed legislation as well as abuses by members of the Legislature, including the lecherous behavior of his Sacramento roommate, State Senator Tony Mendoza (D-Artesia).

These two politicians need to be held accountable for enabling inappropriate behavior in the Legislature, not only by Bocanegra, but other elected officials in the Senate and the Assembly.

In addition to having their Party pay for the special election, Lara and de Leon should abandon their campaigns for higher office as they have demonstrated that they are unfit for higher office.  Lara is actively campaigning to be the State’s next Insurance Commissioner while de Leon is running to unseat US Senator Diane Feinstein.

We need to hold our elected officials and their staffs accountable in the same way that the rest of us are held accountable for our actions.  Quite frankly, they should be held to a higher standard.

Enablers Lara and de Leon have demonstrated that by their actions and inactions that they are not fit to represent us in Sacramento.  It is time for them to take the high road and join Bocanegra by immediately resigning their Senate seats.