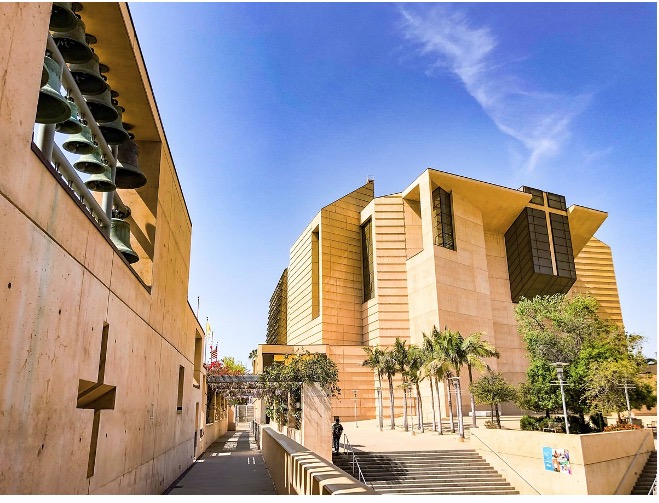 LA TRANSPO - As one still COVID concerned, I try to restrict my going into crowded indoor settings. I wear a KN95 face mask whenever I go shopping, attend indoor events, and at Mass.

Christmas Mass is always a special event. I was thinking of attending Christmas Eve Mass at Loyola/Marymount University/LMU at their beautiful chapel, but I knew from previous Masses Christmas Eve there the Mass is packed. I ask myself “Where did all of these Catholics come from?” Christmas attendance greatly outnumbers regular Masses.

Mandatory face mask restrictions are lifted in Los Angeles County. With a packed chapel of worshippers talking, praying, and singing without wearing face masks, I did not like the odds. Yes, it is a church, God’s house, but even there the laws and rules of medicine and virus transmission still apply.

I had settled on a local parish church, St. Jerome, for Christmas Day Mass. This church is large, end of the mid-century style, with plenty of air circulation, and sadly not well attended. It is a beautiful church and a low attendance on Christmas would be disappointing, but safer from a COVID transmission standpoint.

While searching the internet for Mass times I stumbled upon the link for Christmas Day Masses at Los Angeles’s Cathedral, The Lady of the Angeles Cathedral-downtown Los Angeles. Across from the Music Center.

This modern cathedral, designed by Spanish architect Rafael Moneo, with an interior larger that St. Patrick’s Cathedral in New York looked promising. It is deceivingly very large inside. Starkly beautiful with very high ceilings. This could work.

The cathedral had a 10:00AM Mass. Of course, I could drive, but as one very concerned about global warming from man-made carbon gases, particularly from my driving, I ride a lot of buses and trains. I thought this could work.

I would not drive to the cathedral, DTLA, but take trains. For years I have taken the Expo Line to DTLA, and exited at the end of the line, the 7th Street Metro Station, or transferred to a subway downstairs at this station to continue to other places DTLA.

The problem was getting to the Expo Line from near LAX. Before I would need to drive to an Expo Line Station, then park and ride. But, with the newly opened Crenshaw Link/K Line I had a local station nearby, the Westchester/Veterans Station. This convenience to a local train station is beautiful. 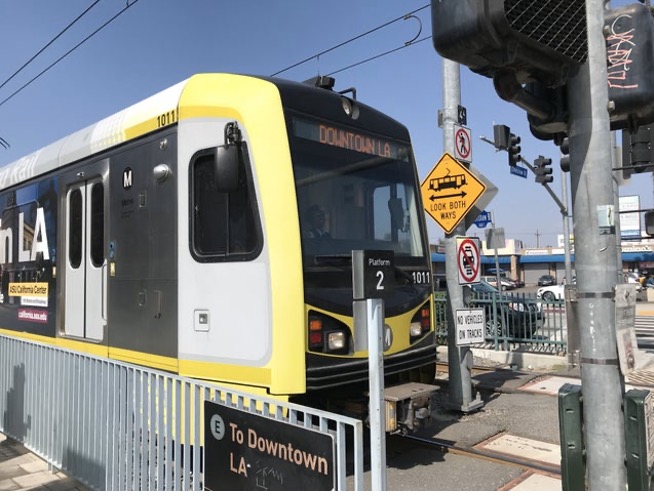 And what better way to try to slow down the existential threat to God’s little planet in the infinite, or maybe not infinite but extremely large universe than to drive a little as possible to reduce my car’s exhaust going into the atmosphere and ride trains to Mass the cathedral.

From previous trips riding the Crenshaw Line to the Expo Line to a subway-I don’t recall which one since both lines have colors too similar in color, I gauged my travel time for Christmas Mass at Cathedral of Our Lady of the Angels.

Christmas Day arrived sunny and warm, just before the current onslaught of rains in SoCal. However, my morning routine of some coffee and toast before Mass took longer than I had hoped. I was running a little late.

I drove to the Crenshaw Line Westchester/Veterans Station in under five minutes. It was Christmas morning and traffic was very light. I boarded a train and probably sat for probably five minutes. The journey on the Crenshaw Line to the Expo Line to the Red or Purple Line subway that morning took around one hour. I exited the Civic Center/Grand Park Metro Station just before Mass was to start. This station is across the street from the cathedral by about a couple-hundred yards. I quickly walked to the cathedral, entered the courtyard, put on my face mask, and entered the cathedral.

It was very crowded. It is interesting that the cathedral was not filled Catholic movers and shaker of Los Angeles as one would expect for this very holy Mass at the city’s main cathedral. It was instead a mixed congregation of races and colors. And while hard to gauge, decidedly more middle class than upper class. It was beautiful to see the mixes of people.

The Christmas Day Mass at the Cathedral was that special event of a Mass on that special day in the center of Los Angeles.

Returning home was the same route. The subway and light rail trains were more crowded, with more homeless in the trains. But this was Christmas Day, for those of us who believe we are all God’s children, I gently stepped around the homeless in the trains. A few even wore face masks. The sadness of this situation is that those who service the homeless, governments and private organizations, have hijacked trains and buses and use them rolling homeless shelters.

A Christmas wish is the homeless situation improves so buses and trains can get to their business of moving people around the city, to get more people out of their vehicles and ride transit to reduce global warming, and to wish All a good Christmas, Happy Holidays, and best in the New Year.

A Christmas Day gift is this nearby train station, something we should all enjoy and take advantage of wherever one lives.

(Matthew Hetz is a Los Angeles native, a composer whose works have been performed nationally, and some can be found here.  He is the past President of the Culver City Symphony Orchestra and Marina del Rey Symphony. His dedication to transit issues is to help improve the transit riding experience for all, and to convince drivers to ride buses and trains to fight air pollution and global warming. He is an instructor at Emeritus/Santa Monica College and a regular contributor to CityWatchLA.)