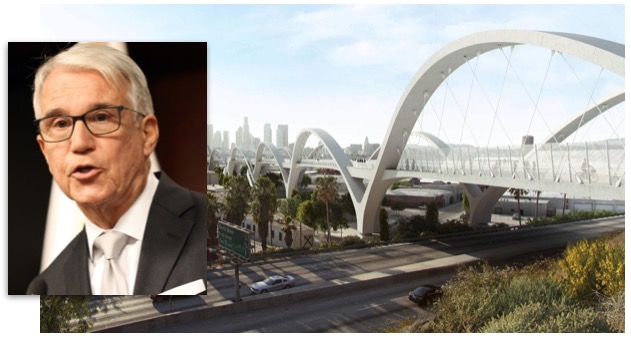 RantZ and RaveZ - The new Sixth Street Viaduct and what it has become for Commuters, Residents, and the LAPD.

Many of us who have lived or been around Los Angeles for any length of time can remember the Historical 1932 era 6th street bridge that connected the east portion of Los Angeles to downtown L.A. and points beyond.  The $588 million new Viaduct on 6th street fills the gap on 6th street and has become a tourist attraction for many residents and visitors to the area and a major headache for the LAPD, Dept of Transportation, and a variety of other city departments.  What the new addition to the community has done is create a place for lawlessness, takeovers, street racing, graffiti, and a host of other illegal activity.

The situation has become so bad that the city has deployed city employees to the area to maintain order and eliminate graffiti and other signs of lawlessness.  The city council recently approved $706,000 to remove graffiti and provide other maintenance to the structure.  Another example of how some people in the city strive to ruin something built to aid commuters and enhance the appearance of the community.

The Recall of L.A. County District Attorney has failed for the second time.   The second attempt to Recall George Gascón has failed.  With over 715,833 petitions submitted to the L.A. County Register-Recorder, 195,783 were found invalid.  A total of 566,857 valid signatures were required to approve the Recall.  The numbers broke down as follows:

As the Co-Chair of the Gascón Recall campaign, I am troubled with the results of the findings.  Our committee will be reviewing the options to determine what opportunities exist to move forward with our continual concern for public safety and the lack of prosecution of those that commit Felony crimes in Los Angeles County.  We have 21 days to decide what action to pursue.

It is interesting to note that 520,050 signatures were ruled VALID which demonstrates strong public support for the Recall of Gascón.  This is in addition to the 37 cities that voted to support the Recall and the 98% support for the Recall from Deputy District Attorneys who have been forced to follow the Gascón rules that let the criminals runs free to terrorize the people of the 88 cities in Los Angeles, County.

*Man Arrested in Attack on Woman in Hollywood.

*One Man Killed, One Wounded in Northridge Shooting.

*Mortally Wounded Detroit Police Officer’s Partner Never Left His Side as He Died.

Sheriff Alex Villanueva vs the 5-member County Board of Supervisors.

The Sheriff of Los Angeles County is elected by the voters every 4 years.  The Sheriff is responsible for operating  the County Jail and providing law enforcement services to communities in the county and support for police departments.

Sheriff Alex Villanueva is an experienced and dedicated member of Law Enforcement and well respected by his Deputies and many leaders in the county.

The Sheriff has clashed a number of times with members of the County Board of the Supervisors while standing up for County residents and his department.  The Supervisors have restricted his funding for public safety and failed to support him in his dedication to public safety.

The 5 Supervisors who run Los Angeles County have decided to change the position of Elected Sheriff to an appointed position.  This would strip the public from selecting the Sheriff of Los Angeles, County.

I have done my research on Sheriff Alex Villanueva and his opponent. I support Sheriff Villanueva to continue as Sheriff of Los Angeles County and hope you will join me in voting for him in November.

Something Sweet for you.

On August 31, Baskin Robbins is offering 31% off all scoops of ice cream.  Yummy for you and your friends.

Finally, a Tribute to Ken Draper, Publisher of CityWatch

I’ve known Ken Draper for many years.  When Ken asked me to do a column for CityWatch, I said I will try it out.  Years later I am still at it.

I remember enjoying lunch with Ken at Art’s Deli in Studio City.  We kept planning on returning there but his failing health prevented him from making the trip.

Ken was a very kind and caring man who built CityWatch to what it is today.

Rest in Peace my Friend….

(Dennis P.  Zine is the author of RantZ and RaveZ.  The column is published to enlighten you on issues impacting L.A. and America.  Dennis is an active member of law enforcement and a retired elected official.)