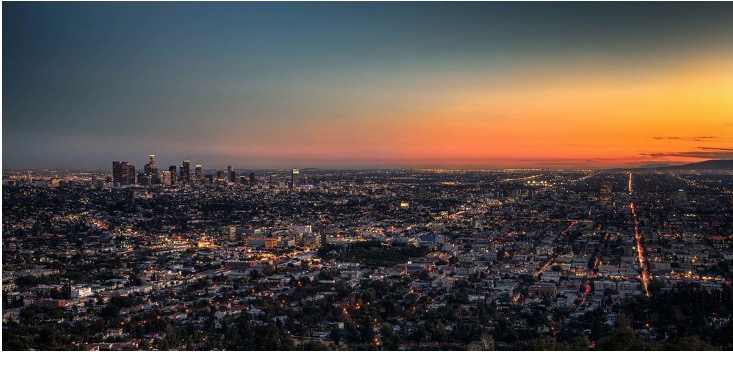 ALPERN AT-LARGE - There are a few of us lucky to have known, written for, and worked with the late, great Ken Draper, founder of CityWatch (CityWatchLA.com).

I am truly grateful to have become one of them.

Transportation/Infrastructure (especially the former) was my first main contribution that Ken wanted, and it was as much fun to write to catch up with and talk to him ("from Ken, to Ken") on that subject as it was to actually write about it.

Then things changed, and kept changing...but Ken Draper never stopped staying with me, with both encouragement and endless support as I was drawn into what I felt was a changing (and at times, dangerously and dramatically so) era in our city, state, and nation.

1) Once there was a growing rail transportation system that was full of promise in the L.A. County region. It was so fun, and so exciting, to write about--and Ken Draper supported me all the way.

Then along came the horrors of politicizing transportation (and infrastructure, to boot) into a woke-laden series of agendas that NOTHING to do with safe, convenient, and affordable mobility. Babysitting the homeless, crime exploding on transit, changing the leadership of bicycle advocates to "bike nazis" (you know who you are), and enabling monstrous overdevelopment became the New Reality of Transportation...

...but Ken Draper never stopped appreciating my input, because he felt that all sides needed to be heard--especially a transit advocate like myself who had the temerity to represent taxpayers, commuters, and those unable to defend and advocate themselves against "Transportation Gone Wild".

2) Once there was an exploding Neighborhood Council system that offered a plethora of opportunities for Joe/Jane Angeleno to have his/her voice heard and provide input into City politics and policies... Grassroots democracy became all the vogue, and former Mayor Richard Riordan was a champion of that effort.

Then along came Mayors Hahn, Villaraigosa, and Garcetti, who stated they would continue that grassroots effort, only to morph the Neighborhood Council system from a "grassroots bottom up" paradigm to a strict, harsh, and dictatorial "City Hall top down" way of doing business...

...but Ken Draper never stopped appreciating my input, because he, too, wanted grassroots democracy, and for the voice of "The People" to be heard (whaddaya think he started CityWatch for, anyway?). And he appreciated someone like myself to weigh in, despite the blowback he/I received for having the temerity to represent our neighbors.

3) Once there was a balanced City that was supposed to defend the helpless and keep all sides in check, and to do so in a nonpartisan manner.

Then along came a cadre of oligarchical political "upper class" individuals who enabled the powerful and silenced the powerless, and who forced those who could to leave the City...leaving the rest to just shut up and keep their heads down (or face the consequences)...

...but Ken Draper never stopped highlighting the appropriate critiques against the Mayor, City Council, Transportation Tyrants, and Planning Politburo that became a growth industry, and honored me with the ability to be part of those critiques.

4) And my friend Ken Draper never stopped allowing me to weigh in on COVID-19, and allowing me to fight and advocate for a policy that walked the thin line between the extremes of "masks forever, we're all going to die, and to hell with kids who needed school and adults who needed jobs" and "masks and vaccines are B.S., and how dare you take away my civil rights, despite people dying right and left".

Ken, you watched over the City of the Angels as best you could, and when we needed you the most.

And you will watch over us now that you are an Angel yourself, and over those of us who must watch the City from here down below you.

May our own efforts be as enthusiastic and never ending as Ken Draper's were.

(Kenneth S. Alpern, M.D, is a dermatologist who has served in clinics in Los Angeles, Orange, and Riverside Counties, and is a proud husband to a wonderful wife and father to two cherished children. He was termed out of the Mar Vista Community Council (MVCC) twice after two stints as a Board member for 9, years and is also a Board member of the Westside Village Homeowners Association. He previously co-chaired the MVCC Outreach, Planning, and Transportation/Infrastructure Committees for 10 years. He was previously co-chair of the CD11 Transportation Advisory Committee, the grassroots Friends of the Green Line (which focused on a Green Line/LAX connection), and the nonprofit Transit Coalition His latest project is his fictional online book entitled The Unforgotten Tales of Middle-Earth and can be reached at [email protected]. )