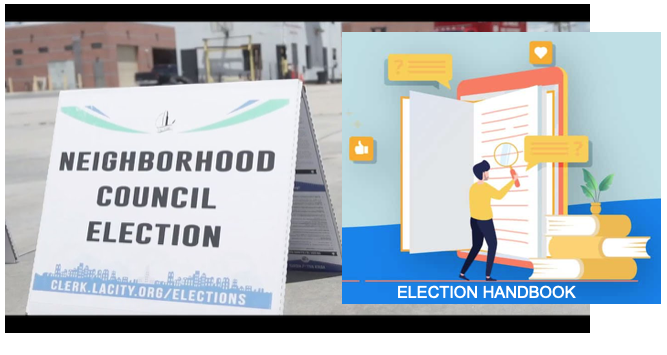 THE EASTSIDER - Bear with me.  This one goes back to DONE’s incredible mishandling of the Neighborhood Council Elections in 2021.

Where they left the City Clerk holding the bag of actually trying to hold elections which were not going to be held in some cases per DONE Regulations.

Evidently the brain trust at DONE woke up one day and realized there needed to be Neighborhood Council Elections in 2021.  So they did what wannabe bureaucrats the world over always do - they put together a 40ish page Election Handbook guaranteed to be incomprehensible, so no one would notice the fatal flaws.

For example, at Section 3.13 of this bible where is the wonderful section called “Board Affirmation and Loss of Quorum:

“In the event there are not enough candidates in a NC election for a single NC board seat, that contest will be omitted from the Official Ballot.

In the event there are not enough candidates in a NC election or if there are no competitive contests (two or more candidates) for all board seats after the List of Certified Candidates has been released, the election for the given NC will be suspended and cancelled.  Any candidates that have been certified will be seated by EmpowerLA through the Department’s prescribed Board Affirmation process.”

And pages more of the same drivel. What they are really admitting to  in writing is that DONE has been so busy imposing bylaws and busywork like codes of civility on the poor Neighborhood Councils they cannot field real elections in the 98 Neighborhood Councils because people are turned off.

So, without admitting their massive incompetence, they have cobbled together a way for DONE to use legerdemain and magic to proudly announce that board seats will be filled by DONE to make the Titanic look like a Princess Cruise liner.

Germane to the rest of this article, they also announced a true bit of persiflage called “Documentation Guide” for “If you participate in a NC as a Community Interest Stakeholder”.   A fair reading of this bit of nonsense essentially says that as long as someone says they “have involvement”in any “community organization” that has any interest in a Neighborhood Councils, by golly you to can get on the Board!

As we shall see later, a mostly social media entity, Lincoln Heights Intel” and hoist DONE and the City Clerk by their own petards.

Oh, did I mention that they decided that NC elections would only be by mail ballot, with a whole other set of rules as to how people could get vetted to get a (gasp) physical ballot?  No online balloting allowed. Even though online voting was permitted in the Skid Row Neighborhood Council election by this very same DONE under Grayce Liu.

Finally, this gobbledygook was capped by a “Regional Election Schedule” jointly put out by DONE and a captive City Clerk.  Yes sir, 12 Regions with different schedules, and a giveaway note of honesty at the bottom which stated:

“These NCs will not be taking part in the 2021 NC Elections: Historic Cultural North, Lake Balboa, McArthur Park, West Los Angeles-Sawtelle, and Westwood.

These Because the Selection process to seat their NC Board members: Chatsworth, Northridge South and Westside”

And this is just a taste of the incomprehensible bullshit DONE foist on an already crumbling Neighborhood Council system.

For those who doubt my narrative, here are the links to both DONE and the City Clerk websites:

DONE Outmaneuvered In Lincoln Heights and Elsewhere (in 2019)

Even before the flop of 2021 NC Elections, we saw the cracks in the system in 2019’s elections conducted by Grayce Liu.

In March 2019, I wrote an article questioning DONE’s competence to run an election:

Even as the new Elections were being ramped up, a City Council Committee was contemplating a number of reforms. As late as December 2018, DONE was reporting on a number of actions which could affect the NC elections.

The takeaway was clear:

“While many neighborhood council leaders are applauding Ryu’s reforms, they are frustrated by the glitch in the timeline, specifically regarding any delay of implementing the new “stakeholder status” definition, which if not fixed now would have to wait until 2021 elections to be implemented.”

DONE also doomed online voting for future NC elections by choosing the absolute worst vendor, which itself was already imploding:

However, in early March we discover that the vendor consistently chosen by the City, Everyone Counts, supplanted by their successor Votem, may well be kaput, and in any event was a provably incompetent contractor. In a very nice detailed article by Katherine McNenny we discover the details:

“Employees at Votem, a company making innovations in online voting platforms, did not receive their most recent paychecks and were told on Friday that everyone was fired, effective immediately...In late 2018, Votem acquired the California-based online voting company Everyone Counts. The roughly fifty employees based in California and around the world lost their jobs Friday as well.” - As reported by Clevescene.com 2/19/19.”

Remember, online voting has recently been championed by none other than Jose Huizar, particularly in the case of Skid Row. He used it to fix the Skid Row election and got the City sued in ongoing litigation by the Skid Row Formation Committee. As I reported back in August of last year, online voting is a major part of the lawsuit.

How they (Silver Lake Progressive) managed to win could represent a playbook for future elections at any level. The group relied on tried and true door-knocking (canvassing) and using social media to reach digital-age voters. “We knew from the beginning we could win, if we got social media savvy young people to come out and vote,” said Robbins.

He elaborated on their successful voter outreach, saying, “We went hard to the paint on social media, knowing that GOTV (get out the vote) was crucial. We ran a digital campaign with a Facebook group, and Instagram. However, canvassing, the door to door part of our GOTV effort, turned out to be as important as our digital campaign. We slowly got the impression from people answering those doors that the opposition was not door knocking, or at least not on as many doors as we did. I personally knocked on about 400 doors.”

2021 NC Elections - The Perfect Storm and Guess Who Won?

I think that Lincoln Heights was ground zero for Beltran’s version of Neighborhood Council Elections to implode.  As I wrote in April.

Ground zero in Region 8 is the election in Lincoln Heights.

As I wrote last year in a Citywatch piece called, “DONE and BONC In Full Meltdown and Impose Bylaws on Neighborhood Councils”:

“Continuing the theme of lawless imposition, let’s take a look at the total absence of due process, moral authority, and frankly, competence, by DONE and BONC. Looks like Lincoln Heights is ground zero. ”

And here we go again, with Lincoln Heights as ground zero. It now appears that a social media group called Lincoln Heights Intel, has decided to run a slate of 10 candidates to take over the Lincoln Heights Neighborhood Council as they allegedly fly the flag of Socialism! No kidding.

So here’s the part I don’t get: In Lincoln Heights, there are 26 Board seats. Yet when you look at the list of certified candidates, there are only 10 positions which have any candidates at all, and 6 of the 10 seats only have one candidate running.

Six out of ten is a majority, but even with all elected seats filled, they are still way short of the 14 needed to constitute a quorum and conduct business.

So just after I proudly did my math, I checked with a friend at LHNC itself to verify my count, and was told, oh no, you got it all wrong.

Yes sir, DONE did a little sleight-of-hand that doesn’t even show up in the documents for the NC elections. I, in my naïveté, was using the actual downloadable “Certified List of Candidates” provided by the City Clerk. Silly me.

Add these 9 existing Board members to the 10 actual ballot candidates for the LHNC and you get a total of 19. Magic! Just to further confuse matters, my LHNC source says there are actually 11 seats up for election, not the 10 which show on my downloaded copy of LHNC “Certified List of Candidates.”

If there are 5 seats up for election with no contest, under what theory don’t the incumbents show up on the ballot for Lincoln Heights?

Flippin’ Off the BONC’d DONE

They can simply bypass the teetering old NC communications system to do anything they want via social media, and damn DONE.  The City Attorneys attached to DONE have been doing everytHing they can to stop Raquel Beltran from actually implementing her bizarre and twisted Draft Digital Communications Policy for Neighborhood Councils, which you can find here.

The link will get you to 4 pages of balderdash, and if you check out the BONC Agendas, it's been kicking around forever.  There’s a reason.  How, exactly, does BONC or DONE propose to censor groups with their own Facebook, Twitter, and/or Instagram accounts?

They are in the groups name, not the Lincoln Heights Neighborhood Council, and as far as I know enjoy full 1st Amendment freedom of speech. So, unless the City Attorney wants to get involved in a food fight that they can’t win, and one which would draw First Amendment types like yours truly, EFF, and Big Tech to squish them like the proverbial bug on a car windshield.

So, now that they have DONE hoist by their own petard, Lincoln Heights Intel is doing whatever the hell they want with the Neighborhood Council.

Grayce Liu would have had the LHNC in Exhaustive Efforts so fast they wouldn’t have had time to schedule a Neighborhood Council Meeting. Instead, in another ‘in your face’ moment, Lincoln Heights Intel has endorsed Eunisses Hernandez for CD 1!  Wow, take that Beltran!  Watcha’ gonna do?

Of course in the meantime, incumbent Gil Cedillo has done a back door deal with President Nury Martinez to give up Lincoln Heights, probably in exchange for some of that grand old Downtown LA developer juice. Hat tip to Lincoln Heights Intel for outing this move even as the Council was about to vote  :-)

I know this piece is getting a bit long, so I will do a followup to dissect the actions by the LHNC vis a vis the laughable “Rules” that a policy wonk like Raquel Beltran loves so much (as long as she controls the rules).

I think that my takeaway from the 2021 DONE Election fiasco still holds true:

Ultimately, the system has digested the Neighborhood Council System and what we’re left with is an absolute failure of its core Charter mandate: holding elected officials’ feet to the fire.”

In part two, we’ll look at some of the specific, feeble acts that DONE has begun to roll out (like a staff letter to the Board), and their conundrum...