PLANNING WATCH-PT Barnum said there is a sucker born every minute. Famous newspaper man, H.L. Mencken wrote something similar, “No one nobody ever went broke underestimating the intelligence of the American people.”

Too bad these famous truth-tellers are no longer around to pull back the curtain on another whopper, that giving real estate investors free rein through up-zoning results in economic and racial equity.

This story begins with the enormous Black Lives Matter (BLM) demonstrations in the summer of 2020. There were spontaneous BLM rallies in all 50 states protesting the murder of George Floyd. Some news stories reported that this was the biggest wave of demonstrations in American history, and it was certainly the largest protest movement since the Occupy Wall Street encampments of 2008.

Shortly after the BLM marches, the non-profit, public, and private sectors responded with programs to promote racial equity, (not to be confused with structural changes achieved by a wealth tax and increased minimum wage.) In the lead were the social justice foundations, especially the Ford Foundation. In July 2020 it declared that local programs that promoted racial equity in American cities were its priority, even though the BLM demonstrations’ focus was police murders, not housing discrimination.

The private sector soon followed suit, such as Citi Bank. It created a $1 billion fund to narrow the racial income gap.

Another part of the story is the role of advocacy organizations. In an August 2020 position paper on racial disparities and housing policy, Habitat for Humanity International wrote, “Helpful reforms can take various forms, including lowering minimum home-size and lot-size requirements, permitting duplexes and triplexes, allowing apartments in more locations, and minimizing discretionary review processes.”

At the same time, the media offered parallel stories, such as a July 2020 article in Forbes Magazine on housing equity, How Systematic Racism Exists in U.S. Housing Policy. The article’s theme was a straightforward call for up-zoning, “Zoning laws rooted in racist land-use policies continue to . . . limit the amount of multifamily housing that can be built in certain neighborhoods.”

How have elected and appointed officials responded to these and similar public policy overtures from the real influencers in American society?

President Biden has offered equity as the rationale for the housing component of his American Jobs bill. It would offer housing grants to cities that increased their zoning capacity, a supposed step to reduce racial disparities.

At the State level, the California Housing and Community Development Department has issued detailed maps for the entire state identifying opportunity areas where up-zoning should be encouraged to, they claim, promote racial equity.

The same message gushes forth from up-zoning advocacy groups in LA, which conflate racial equity with private sector housing investment. They, too, quickly hopped on board, claiming zoning deregulation would eliminate racial inequality.

Not to be outdone, a group of liberal academics have issued a detailed call for President Biden’s American Jobs Plan’s proposal. They want to heavily condition the proposed legislation’s neo-liberal up-zoning component, so it promotes racial equity, not developer profits.

Nevertheless, some City Hall officials got the message about racial equity. City Planning recently issued a lengthy report to the City Council on the citywide distribution of equitable affordable housing. This report portrayed up-zoning as a major equity program. While giveaways to real estate developers have been standard City Hall practice for decades, the claim that these sweetheart deals are bold steps toward economic and racial equity remains evidence-free.

These are the report’s major proposals to promote equity through the planning process. (Since the abridged bullet points below are extracted from the City Planning report, I encourage CityWatchLA readers to check out the full text.)

Since this report is not transparent, let me translate it into accessible English. It is nothing more than Reaganomics. Los Angeles should up-zone affluent neighborhoods, as shown in the map below. They will become the location of most future residential construction, including affordable housing units for low-income Angelinos. In these areas up-zoning will allow developers to automatically build taller, larger, denser (more units per lot) profitable buildings without zoning waivers. 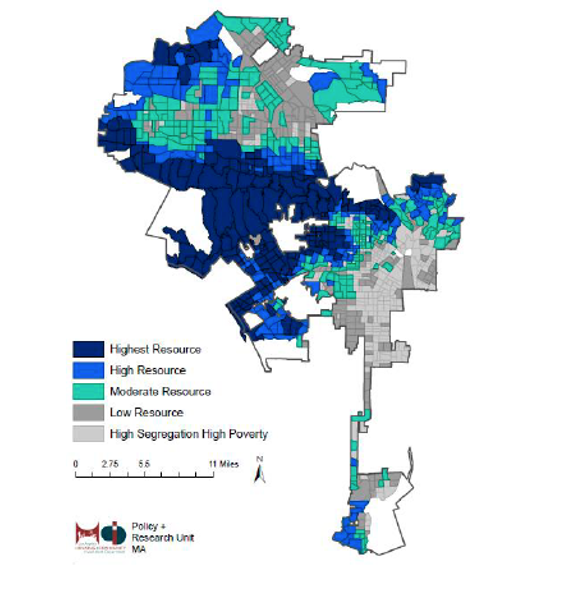 Will this report’s recommendations work? Will up-zoning LA’s “high opportunity” neighborhoods tracts on the above map (black, blue, and turquoise) produce affordable housing and a more equitable Los Angeles?

The answer is NO. These are the reasons:

The content of these racial equity proposals is trickle-down economics -- if we let the rich get richer through real estate investments, housing and economic opportunities will lift-up the poor. It did not work for Lyndon Johnson or Ronald Reagan, and it will not work this time either.

(Dick Platkin is a former Los Angeles city planner who reports on local planning issues for CityWatch. He serves on the board of United Neighborhoods for Los Angeles (UN4LA) and co-chairs the new Greater Fairfax Residents Association. Previous Planning Watch columns are available at the CityWatchLA archives. Please send questions and corrections to [email protected].)