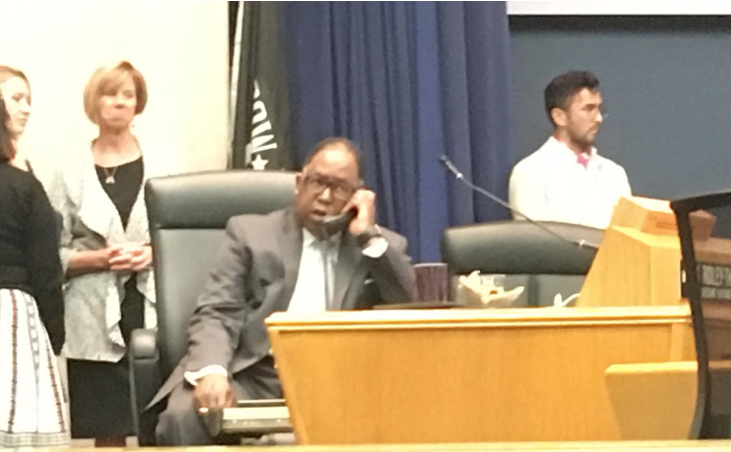 THE CITY-An interesting question arose at the LA City Council meeting on Tuesday. A member of the public accused Mr. Ridley-Thomas of pimping the African American community.

MRT immediately hit the block button and started speaking over the member of the public, not exactly refuting but denigrating the comments as a meaningless rant that was "out of order."

As Memorial Day officially approaches it is important to take inventory of those who fought and made the ultimate sacrifice but also those who tried to speak out but were quashed by big mouth wind bags.

Zev Yaroslavsky the former third district Supervisor used to informally refer to Mr. Ridley-Thomas as the "great abstainer" on account of his strategic unwillingness to vote on critical items.

During a period when public comment was taken and dispensed with at a table fashioned as a dais with four chairs to allow members of the public to sit for a moment as they awaited the opportunity to address the mighty board directly, thousands were dismissed rudely.

Brad Pitt, the Angeleno and LACMA proponent who had been dragged down by Michael Govan who has an excellent working relationship with. . .everyone including MRT, said addressing the LA County Board of Supervisors was more intimidating than he'd expected.

He's right, but he wasn't referring to the retaliatory conduct MRT attempted when his egregious behavior was challenged by a very diligent member of the public.

The county board spent nearly $1.3 million in June 2019 to dismantle the old interface and reconfigure it without the proverbial seat at the table, which had allowed members of the public to speak in such a way that eye contact could be made with the leaders, and occasionally an admonishment could be delivered about a supervisor talking on the phone.

The County Board has since cut back to one regular open meeting every thirty days. And Supervisor Solis, who is shameless, has taken to denying comments from critics, even when she's required to take them, like this Tuesday at the Board's absurd secret meeting.

"Mr. Ridley-Thomas, are you on the phone? I'm dying here."

One time, I shuffled in and took my seat next to a particularly articulate, coherent older person. I was impressed because she had notes, but wasn't reading, just glancing as she gave a horrifying report about members of her family that had been detained without “due process.”

She described a nightmarish Kafkaesque encounter with the county and the concerted family effort, including raiding college savings to hire an attorney to help break the county's horrible grip on her family.

I found myself tearing up as this brave little old lady pleaded for relief and restoration.

It was deeply moving.

Mr. Ridley-Thomas was distracted, and you could tell he was not listening at all. When he brazenly reached into the console before him and pulled out an old analogue style telephone.

The whole room was all taken aback. There was a gasp.

The most easily offended usually turn out to be the most offensive:

His heart has been adjacent to the right place. . .sort of. And he will always be remembered for pushing tap cards, his crowning achievement and signature accomplishment.

His association with USC scandals has been robust. The man even has a $100,000 mistake all his own, issued in his son Sebastian's name.

His work as a recipient of football swag and various coliseum corruption is duly noted with disappointment.

Regarding the county resources that he allegedly used to wire his bonus room?

Guilty as charged, but his strong relationship with the Los Angeles Times and the Bakewell hammerlock on local papers of color has resulted in a comprehensive whitewashing (sorry) of his activities. He gives public dollars to Bakewell in exchange for cooperative and grateful coverage.

The Scott Walker-like reaching in and bossing county workers into sending messaging during Sebastian’s special election was briefly alluded to in an earlier piece.

When the public first caught wind -- no pun intended -- of Mark Ridley-Thomas's capacity to put Richard Bruckner of Regional Planning into service, it was during his son Sebastian's first campaign for Assembly district 54. Pre-scandal.

MRT had decided that it would be highly impactful to have a letter arrive at constituents' doors confirming what Sebastian had said about fracking. The "Draft Ltr re Fracking," it was decided, would come from Richard Bruckner, the Director of Regional Planning.

Though it was clearly inappropriate to be deploying public actors into a private Sebastian Ridley-Thomas election moment, that's exactly what happened.

It's a county classic, in which an email chain obtained through the public records act surrounding the Baldwin Hills Community Standards District and the Community Advisory Panel revealed how under MRT’s initiative, a clever but not necessarily ethical or legal use of public resources was deployed.

Richard Bruckner to Karly Katona: "I am on 8th floor if I get a break I will stop in."

The Los Angeles Times swore they were doing the story on the CPRA and what it revealed. Paul Pringle, himself, the éminence grise of MRT attacks, finally wrote to me in May 2015, "The story will soon see the light of day."

Consider a few snippets from that trove of emails to get a flavor:

"I know MRT would appreciate it if we could get this out asap."

"Thank you. Can we make it addressed to Neighbor not Resident? Also, the Supervisor liked the post-it that was on the version yesterday. Can that be added? Karly."

"FYI, we found a vendor for the Baldwin Hills mailing who will meet the Monday deadline, cost $20,000 for black and white. The cost for color was $25,000 but wouldn't be able to meet deadline. Order has been submitted. Thank you for your support."

"How should I code this task on my time sheet? As 3011, or something  else? Thank you. Chris."

11/26 FW Baldwin Hills - mailing info:  "Is there a specific account to charge this too? The mailing for Baldwin Hills? It's okay if there is not. But just curious. Nick."

But somehow the man who could put such an impressive almost Scott Walker-level county malfeasance scheme into effect, was equally capable of sinking the story at the Times.

MRT has worked diligently with the Korean American community, generally, and in his full-throated acceptance of contributions from Jamison, who have a shocking number of contracts to rent the county office space.

The man has bullied critics nobly and stood side-by-side with Donald Knabe to rescue young women and girls from being trafficked in South Los Angeles, while abstaining on votes that shipped millions in county revenue that would have helped them to Wall Street.

And he even found time to tool around Washington D.C. in a limousine at taxpayers’ expense.

One masterful ruse, he put a huge self-congratulatory advertisement of himself in the LA Press Club awards program, lording over various 2nd Supervisorial District gems like LACMA while running for city council.

That year, my brother and Alleen Brown won awards for exposing hard truths in The Intercept about the mayor, the fire department and an astonishing effort by LA powers-that-be to scapegoat the homeless, yet we could not marshal sufficient acumen or resources to figure out who covered the cost. Does anyone know?

The Ethics Commission has had all its funding requests approved so. . .

"All right. Thanks very much"

When the city announced it was rolling into the children's business by setting up a new department, I immediately thought of a prior Community Development Commission's acceptance of $10,000,000 in First 5 LA funds. It was a county item but is a good explainer as to why the "abstainer" is sometimes called the "compromiser" and demonstrates a comfort level with being "compromised."

Mike Arnold: "Through sequestration and budget cuts, H.U.D. Is messaging that our jurisdiction should anticipate about an 8 percent-- 5 to 8 percent cut in homeless service dollars. So here in Los Angeles and the Los Angeles continuum of care, we have about a $7 million potential reduction in funding that can come in and serve programs that are already operating."

Gloria Molina: "I have a question. It claims that it's all for subsidies. Is there any administrative costs that C.D.C. Is taking from it?"

Gloria Molina: "8 percent of how much?"

Mark Ridley-Thomas: "Half of what it was before."

Mark Ridley-Thomas: "Half of what it was before. "

Gloria Molina: "Half of what it was before? They shouldn't get any. So how much is that out of this amount?"

Sean Rogan: "I don't know what the exact number is, so I don't want to be misquoted."

Mark Ridley-Thomas: "But you know I'm somewhere in the region. And you argued as hard as you could to make sure that the administrative fee was such that you could do the best job that the agency could do. And the fact of the matter is what's fair is fair. And we are now moving with roughly 8 percent. And we will get every ounce of our money's worth because we've turned to this agency because they consistently have done what we think is a reputable job. And we thank you. And 5 percent sounds better. Anything more for now? Supervisor?"

Zev Yaroslavsky: "He wanted 15 percent from you, too? "

Mark Ridley-Thomas: "Yeah, he did."

Zev Yaroslavsky: "Son of a gun."

Gloria Molina: "It's really shameful. They already do this work. And I just can't believe they'd take any administrative money into it. It's children's money."

Mark Ridley-Thomas: "All right. Thanks very much."

John Szabo, the head librarian, ought to take down the John Lewis portrait that Mr. Ridley-Thomas helped Netflix install at the City library, and once the stench of hypocrisy has passed (vinegar + peanut butter) he can get a real civil rights leader to re-dedicate the statue of John Lewis.  MRT is a sanctimonious windbag.

Maybe that brave speaker who soldiered on when Mark Ridley-Thomas ignored her pleas and made a phone call during her heartbreaking testimony would be interested.