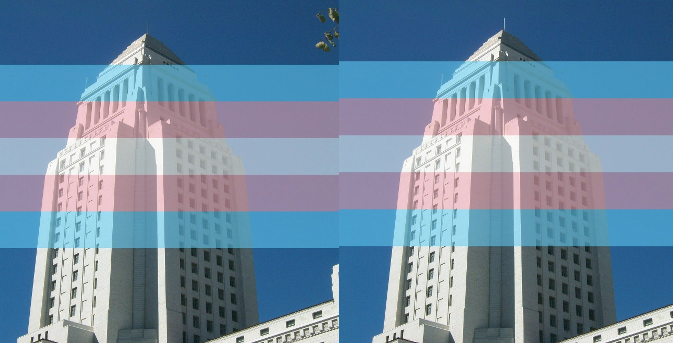 POLITICS--Rachael Rose Luckey is a Transgender Activist and President Emeritus of the Rampart Village Neighborhood Council, running for the LA City Council District 13.

Once elected, she will become the first openly transgender person to be elect to the LA City Council. In this multi-part interview series, she speaks to Campaign Press Secretary Hollis Evans about her transition, political awakenings, the rich, poor, and houseless of CD13, and a future where City Hall commits to building equitable communities where citizens come before profit-driven developments and a militarized police force.

In this final installment of the series, Rachael Rose describes how her experience as President and Board member of the Rampart Village Neighborhood Council prepared her to run for the LA City Council CD13 seat, and the reform policies she will introduced, once in office.

Hollis Evans: So far, we’ve talked largely about the past and your track record. I want to bring us forward to the recent events of the day. Last March, most Angelenos watched with some horror as over 200 homeless people were forcibly removed from the tent encampment around Echo Park Lake after Mitch O’Farrell ordered the Park closed for clean up on March 24. The next day, over 400 LAPD ascended upon the Lake and clash with protestors. How could this have been avoided? What would you have done if you had been City Councilmember?

Rachael Rose Luckey: No matter how one feels about whether or not a public park should be used as a place for the unhoused to put up their tents, no matter how you feel about whether or not that should be allowed, the one thing I do know is that without a sufficient quantity of low-income housing that people making $25,000 a year can afford, until there is a sufficient quantity of that, we will continue to have houseless folks.

What I really take objection to is the way in which things were done. It is abominable to me that the Constitutional rights of Los Angeles citizens were abridged by a militarized police force, under the command of Councilman O’Farrell. I understand that the people living around the Park wanted to be able to use their park unrestricted, without the restriction of having unhoused people camped there. At the same time, I also understand that the need for the unhoused to have a stable place to pitch their tents during a pandemic.

Hollis Evans: What could Mitch O’Farrell have done differently?

Rachael Rose Luckey: The thing he could have done differently is, from the time he took office, to champion the working class and to make sure that people making $25K a year could afford a place to live, instead of cozying up to the developer class and gentrifying many parts of Council District 13. Then the probability would be less that we would have so many people camped out in Echo Park Lake.

Rachael Rose Luckey: Now, these politicians are like: “Oh, look, we’re doing something about it.” They  pat themselves on the back for instituting programs that, at the end of the day, don’t actually solve the problems. It’s just absolutely ridiculous.

Hollis Evans: What would you have done had you been in his position?

Rachael Rose Luckey: I would have done what everything I am proposing I will do, if elected. I will fight for social housing. I will fight for an increase in the amount of low-income units that developers are required to supply if they want to take advantage of extra density, and Measure JJJ, and Transit Oriented Community type of bonuses. I would call in the experts to identify ways to bring employment opportunities into the District so that skilled workers can have a job. And these are all things I’m proposing in my run for LA City Council.

Hollis Evans: How did being on the Board, and then as President of the Rampart Neighborhood Council prepare you to become an LA City Councilmember in CD13?

Rachael Rose Luckey: I literally participated in thousands of hours of meetings with stakeholders, developers, city officials, experts, and community organizations. I feel like at this point, over the last four years with what I have invested myself into with all of this, I have what I consider to be the equivalent of a four-year degree in all things City Hall. Also, being on the Board gave me an opportunity to polish myself in how I present to others. And the third thing would be, it gave me an opportunity to develop relationships with community and some of the folks at City Hall.

Hollis Evans: You and the RVNC Board passed three significant reform resolutions earlier this year, calling upon the LA City Council to change appointments on the City Planning, Police, and Ethics Commissions to elected positions. What would be the advantage of changing those positions from  political appointments to positions elected by voters?

Rachael Rose Luckey: First of all, I would have to state these proposals are not a silver bullet. They are an attempt to democratize an otherwise top-down organizational structure.

As to the Planning Department: having been a Chair of my Planning and Land Use Committee for the last four years on my Neighborhood Council, time and again, citizens have pushed back against gentrifying developments, which, as we know, is the root cause of our houselessness problem. And despite the pushback, and despite the critical analysis by the opponents of the gentrifiers, the City Planning Commission, time and again, sides with the gentrifiers. To me, this is unacceptable, this is not democracy.

As to the Police Commission, again, another example of conflict of interest because the Mayor and a number of City Councilmembers accept campaign contributions from the Los Angeles Police Protective League, which is basically LAPD’s union, even though they’re really not a union. So how can a body of folks who are tasked with overseeing the Police Department, actually rule against the Police Department and put their positions at risk because they serve at the pleasure of the Mayor and the City Council? It makes no sense to me, and it is the fox guarding the henhouse.

Hollis Evans: That segues into the area of police reform and public safety. Going forward, how do we achieve those with LAPD? How do we ensure public safety?

Rachael Rose Luckey: I firmly believe we do not need a militarized police force and that’s exactly what we have right now. In my mind, there are a great deal of 911 calls that do not require an armed police presence. We send out paramedics and the fire truck all the time, and they are not always accompanied by LAPD. I believe we need to create the infrastructure to be able to have non-lethal responders go and pick up these 911 calls. There does need to be a much smaller armed police presence to deal with the most dangerous citizens within our society.

Most certainly, the reallocation of a majority portion of the $3 billion-a-year LAPD budget, a reapportionment of that should go to communities, aimed at increasing services that bring those communities out of poverty and out of survival mode, and bring them into a thriver mode. That is fundamental. We need a situation where people are not just surviving, but where they are actually thriving. When you look at the comparison of LAPD’s $3 billion budget and the summation of all the other social programs such as housing, the LAPD budget greatly eclipses all those other budgets.

Hollis Evans: It’s been reported LAPD is upgrading technology to encrypt scanner communications in the future, so members of the public will not be able to monitor police communications and post them online, as we saw during the Echo Park protests. Any thoughts on that?

Rachael Rose Luckey: That’s what these corporatists don’t really. . .well, maybe they do understand. You keep the masses down long enough, and you starve them long enough, and you leave them without hope long enough, and they will rise up. That is human history, every single time. Without fail, without question. And, in my mind, we are on the verge of that exact scenario. Not a peaceful uprising, but a violent uprising.

Hollis Evans: Which is what?

Rachael Rose Luckey: Which is all based on money. Mitch O’Farrell is as guilty as this as anybody. And that is where, in Mitch O’Farrell’s case, I’ve come across evidence that developers, and this is all on the record, have contributed to his slush fund within City Hall. It’s some sort of a trust fund.

Hollis Evans: I believe Garcetti has one, too.

Rachael Rose Luckey: Yeah, the Mayoral Trust Fund, or something like that. And it’s actually in the documents, in the public record, that to get what the developers want, they have to put money into the account. And not small amounts of money. Then, the Councilmember can turn around and use that money to give to, say, nonprofits. Then, the nonprofits can turn around and support organizations and political causes, even though 501(c)(3)s are not supposed to take political positions, but that doesn’t mean these folks aren’t out there propping up their bread and butter. All of that just perpetuates the system. This is what is called legal bribery.

Hollis Evans: You’ve said you’d take a cut in salary, if elected. Explain how much of a cut and where would that cut go?

Rachael Rose Luckey: One of my campaign promises is that I will, after taxes, put 25% of my salary into my re-election campaign. I will put another 25% of my salary back into the community, and I will keep the other half for myself, because I want to demonstrate that, for me, it is not about the money. I do not define my success by how much money I have in the bank, or how many toys I have. I define my success by how I live my life in society and the good I can do to my fellow human beings. That, to me, is the definition of success, not wealth.

Hollis Evans: Why put 25% of your post-tax salary into a re-election campaign?

Rachael Rose Luckey: The reason why I decided to do that is because the electorate that I hope will support me are people who are in my own present situation of just barely getting by. I personally do not have a lot of money to be donating here and there to political candidates I support. And I know folks out there don’t either. And, so, to me, it’s a way of easing that burden, if I already have a decent pile of cash from my own pocket to put into re-election, that’s less money I have to depend on from my constituents.

Hollis Evans: A final question: if you are elected as the first openly transgender City Councilmember, what impact do you think that will make on City Hall?

Rachael Rose Luckey: The answer to the question is win, lose, or draw, if one person, one transgender person, sees what I have tried to do and ends up running for office, I will have done what I wanted to.

You can find out more about Rachael Rose Luckey and her campaign for LA City Council CD13 at RachaelRoseForLA.com, and by checking out her blog, ConversationsWithLA.com.

You can find previously published parts of Is City Hall Ready for A Transgender Councilmember, by clicking on Parts 1, 2 or 3.