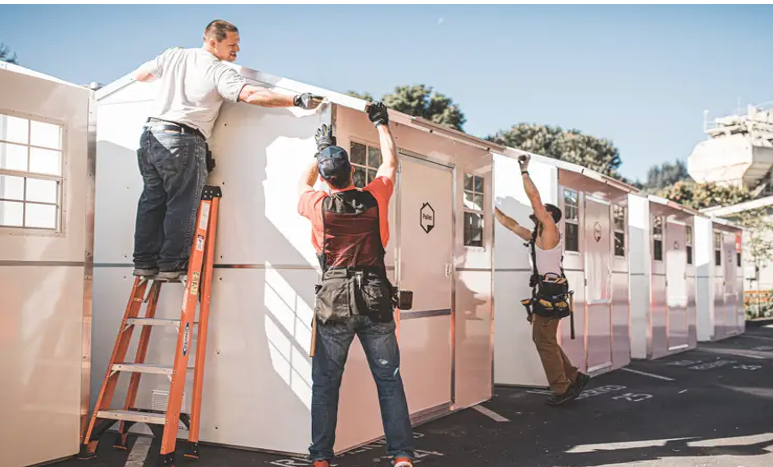 EASTSIDER-I think the headline says it all. Recently, there are signs the LA City Council may be headed in the right direction, but it’s on a small scale and the question is whether the developers who own the Council can allow a good thing to thrive.

Recently I wrote about CD14’s Kevin De León’s setting up of shelters in two locations to temporarily house the homeless:

“As part of his far-reaching plan to combat homelessness in Los Angeles, CD 14 Councilmember Kevin de León recently filed a motion that could bring small, prefabricated housing units to two locations in Northeast LA. One location, in Eagle Rock, is the city-owned parking lot at 7541 N. Figueroa Street next to the on/off ramps of the 134 Freeway.”

The problem with the two locations he chose was that they were both placed next to freeway onramps with contaminated air, which was contrary to Judge Carter’s ruling. So what else is new?

Separate from those issues, I think the provider of these shelters is on to something. Called simply Pallet, they approach temporary homeless lodging from a different perspective.

Based in Washington state, the company has a high percentage of employees who themselves were homeless and/or incarcerated. As one of their staff wrote:

Their goal is simple -- to end homelessness and at the same time build a non-traditional workforce which includes them. Take a minute and browse their website. It’s a breath of fresh air compared to the traditional LA City solution of involuntary displacement of the homeless.

The cool thing is that the two most affordable shelters can be put up in a few hours using non- traditional workers who themselves have experienced homelessness, and after they have served their purpose, the homes can be broken down, folded up, and stored for future deployment.

“refabricated at Pallet’s factory headquarters, the shelters are shipped on a wood pallet in seven panel pieces.

Pallet’s shelters are built in less than one hour with minimal tools.

In LA City, the biggest impediment to getting anything done is. . .LA City! For example, here’s an excerpt from Kevin De León’s motion to get two relatively small groups of these homes:

“I THEREFORE MOVE that the Bureau of Engineering, in coordination with the City Administrative Officer, Chief Legislative Analyst, and Department of Recreation and Parks be instructed to initiate the design process for temporary homeless housing on the parking lot located at 7541 N. Figueroa Street as well as the unused section of Arroyo Drive located adjacent to Assessor Parcel Number 5492021900.

I FURTHER MOVE that the City Administrative Officer and the Department of Recreation and Parks be authorized to execute any agreements with SoCal Edison and the County of Los Angeles for the property located at 7541 N. Figueroa Street in order to effectuate the construction of temporary homeless housing.

I FURTHER MOVE that the Board of Recreation and Parks Commissioners be requested to hear this matter within 30 days for consideration of approval of the usage of the parking lot at 7541 N. Figueroa Street for temporary interim housing for people experiencing homelessness.

I FURTHER MOVE that upon completion of construction, priority for all units shall be given to unhoused individuals in Council District 14, starting with the neighborhoods that each site is located within;

I FURTHER MOVE that the City Administrative Officer and the Housing & Community Investment Department be instructed to modify any necessary contracts with the Los Angeles Homeless Services Authority to ensure that homeless individuals in Eagle Rock and Highland Park are given right of first refusal for the new units to be constructed at both sites.

I FURTHER MOVE that the City Administrative Officer be instructed to identify the necessary funding to construct temporary homeless housing on the aforementioned sites.”

Notice all the Departments, Committees, and Boards to do a relatively simple thing.

Other than scouring their website and having a chat with Brandon at Pallet’s office, I have no personal interest in the Pallet. However, their business model makes sense, and by having a permanent stock of these emergency shelters, they could be used by the City and deployed for other types of catastrophe in the future. Quickly.

Sadly, the Council motion speaks for itself. The list of bureaucratic make-work to get anything done is crazy. Why can’t the City simply declare a real emergency, waive all the bureaucratic BS, and act?

Instead, we live in a world where the LA City Council has stuck us with $1.2 billion in bond indebtedness that you and I will be paying for a long time. . .if we ever even see the all the units built.

In the case of Pallet Shelters, they go up in hours. So will the Council actually let them happen at scale?

After all, most of the requirements referred to in the CD14 Motion form the kind of bureaucratic maze actually created by the City Council itself -- to create the illusion that they are actually doing something for their money other than rubber stamping what their developer owners want.

And it isn’t that the City doesn’t have enough land available to help. As I wrote in an earlier piece, there’s a good amount of land not too far from City Hall.

We need to see the flip side of this crisis – not what we witnessed over at Echo Park Lake, with a huge police presence, involuntary displacement of the homeless, and a madhouse of protests. Even as the Council members claimed everything was okey dokey.

We write to express our grave and urgent concerns about the recent displacement of the homeless encampment at Echo Park Lake. Many of you have either been actively involved in such displacement or supported it through your silent acquiescence. Especially troubling is the Mayor’s statement, suggesting that such displacement serves as a useful precedent and template. As reported by the LA Times on March 27, 2021 “Mayor Eric Garcetti framed the effort as a success, calling it “the largest housing transition of an encampment ever in the city’s history.”

As experts in the fields of urban planning, social work, history, law, public policy, and public health, we strongly disagree with this declaration of success and instead highlight the far-reaching damage wrought by such displacement. ”

Kudos to them. The tens of thousands of homeless people aren’t going away, and as a City, it’s time for the Council to get it right. Please.

(Tony Butka is an Eastside community activist, who has served on a neighborhood council, has a background in government and is a contributor to CityWatch.) Photo: JConnection 2013; King County Archive. Edited for CityWatch by Linda Abrams.