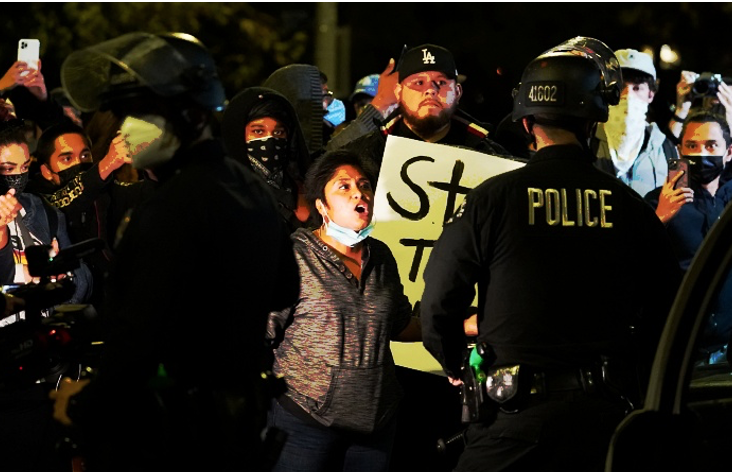 We write to express our grave and urgent concerns about the recent displacement of the homeless encampment at Echo Park Lake. Many of you have either been actively involved in such displacement or supported it through your silent acquiescence. Especially troubling is the Mayor’s statement, suggesting that such displacement serves as a useful precedent and template. As reported by the LA Times on March 27, 2021 “Mayor Eric Garcetti framed the effort as a success, calling it “the largest housing transition of an encampment ever in the city’s history.”

As experts in the fields of urban planning, social work, history, law, public policy, and public health, we strongly disagree with this declaration of success and instead highlight the far-reaching damage wrought by such displacement.

It was eviction at gunpoint, one that entailed the invasion and closure of the park by a militarized police force and led to “uncertainty, fear, anger” for the homeless residents of Echo Park Lake.

As has been the case more broadly with encampment sweeps in LA, the homeless residents of Echo Park Lake lost invaluable and irreplaceable personal items, including vital documents necessary for access to jobs and social services. It is worth noting that, in April 2020, US District Judge Fischer ruled for a group of unhoused individuals and the community organization, Ktown for All, who filed a lawsuit (Janet Garcia et al. v. City of Los Angeles) challenging the constitutionality of such sweeps and the enabling municipal ordinance, LAMC 56.11.

Councilmember Mitch O’Farrell, who engineered the Echo Park Lake displacement “under a veil of secrecy,” denying reports by the LA Times that park closure was imminent, claimed in a set of tweets on March 27, 2021, that 209 people experiencing homelessness were placed in “transitional shelter with supportive services.” He, and several of you, have justified the displacement on the basis of such placements. This justification requires careful scrutiny.

First, placements into interim shelter must not be equated with housing people. Without a clear path to permanent housing, such temporary housing serves as yet one more stop in the endless cycle of displacement. Many of the Echo Park Lake placements were made to Project Roomkey hotels and motels, in locations as distant as Palmdale. But, as testimonies by Project Roomkey        residents have demonstrated, such shelter is governed by strict curfews and prison-like conditions, requiring those experiencing homelessness to trade their autonomy and dignity for a bed.

Further, as the scandal about the city’s neglect to submit FEMA paperwork for Project Roomkey     reimbursements has shown, there seems to be neither a plan to transition people from Project Roomkey to permanent housing nor even serious intent to utilize Project Roomkey as a robust form of temporary housing. As of March 22, 2021, Project Roomkey Tracker showed that there were 48,038 unsheltered people in LA County, with 15,000 promised rooms via Project Roomkey, and only 2,261 rooms under contract and even fewer rooms – 1,724 occupied.

While Project Roomkey might eventually create a more stable housing option, it is miniscule in scope and therefore negligible, especially in the face of growing housing need in Los Angeles. For a glimpse of how people experience this dehumanizing system, read the account of Diana Doo who spoke to journalist Aaron Schrank on March 25, 2021, shortly before the police invasion of Echo Park Lake.

Second, as Diana Doo’s account demonstrates, the Echo Park Lake homeless encampment was a thriving community, with “a community garden, crowd-funded jobs program, and kitchen with free food.” In a city that has criminalized poverty, with numerous municipal ordinances that make it illegal to sleep in one’s car or to own personal property as a person experiencing homelessness, this encampment was a space of refuge, self-determination, and hope.

That homeless encampments have become the only safe and reliable form of housing for many Angelenos is a matter for which you hold collective responsibility. It should not be this way, and yet it is, in one of the wealthiest cities in the world. Under such circumstances, it behooves us all to understand the role of homeless encampments and why they are often preferable to forms of temporary and unsafe shelter. We draw your attention to this 2020 report, For the Crisis Yet to Come: Temporary Settlements in the Era of Evictions, authored by Hilary Malson and Gary Blasi, which summarizes the academic research on homeless encampments and reviews the history of such encampments in Los Angeles. Indeed, this report anticipates that with the growing crisis of housing precarity and evictions, accelerated by the COVID-19 pandemic, the city may have to adopt a policy of sanctioning self-organized encampments, and their use of public space, as a legitimate form of shelter.

Third, we view the displacement of the homeless residents of Echo Park Lake as a forced eviction. Indeed, it was eviction at gunpoint, one that entailed the invasion and closure of the park by a militarized police force and led to “uncertainty, fear, anger” for the homeless residents of Echo Park Lake. It was inevitable that the deployment of hundreds of police officers in riot gear would threaten public safety.

One example of this is the mass arrests, including that of several journalists, on the night of March 26, 2021. After a year of racial justice uprisings that drew renewed attention to police violence and demanded a shift of public resources from policing to community well-being, Los Angeles was once again in the national headlines for a police riot. That some of you have sought to present housing justice advocates standing in vigil with the encampment as those instigating violence is a framing wholly contradicted by every media, ACLU, and National Lawyers Guild LA account of the events of March 25-26 at Echo Park Lake, accounts that are too numerous to present here.

Indeed, it is your decisions that have irrevocably yoked housing to policing, shattering any modicum of trust that unhoused residents and low-income tenants might have had in city programs and shelters. It has now become clear that the City Council, Mayor’s Office, and LAHSA will deploy militarized policing to manage the crisis of housing precarity and homelessness in Los Angeles.

We reject such an approach as precedent and template. We, the undersigned, are just a fraction of the faculty at UCLA, USC, UCI, and Occidental College outraged by the Echo Park Lake displacement, but we hold specific expertise in matters ranging from housing policy to social services that are directly pertinent to this case. We urge you to recognize and redress the damage done to the Echo Park Lake homeless community through such displacement and to prevent the repetition of such harm elsewhere in the city. The Echo Park Lake displacement was ill-conceived, wrong, and it must not happen again.

Dr. Jeremiah B.C. Axelrod—Director of the Institute for the Study of Los Angeles Occidental College

Cheryl I. Harris—Professor of Law UCLA School of Law