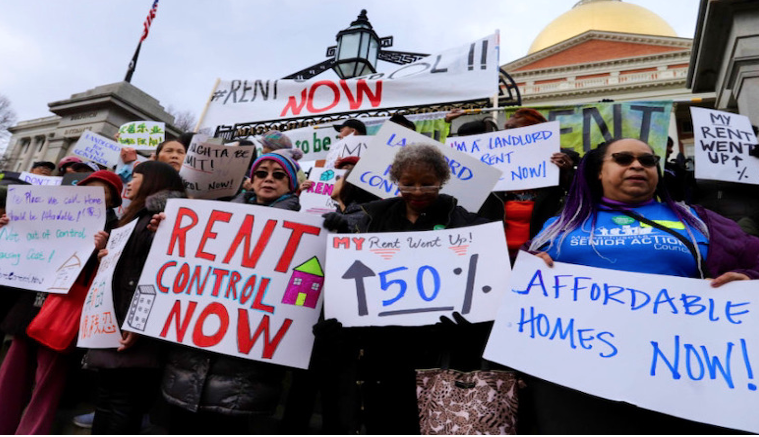 HOUSING IS A HUMAN RIGHT-Since 2018, when Proposition 10 sought to expand rent control in California, rent control movements have only gained momentum throughout the United States.

Most recently, local officials in California, Minnesota, and New Jersey have considered implementing rent control at the urging of activists. With a nationwide housing affordability crisis only worsening due to wildly inflated rents, it’s no surprise that Americans want to finally rein in predatory landlords.

“Our neighbors are telling us they are getting forced out of their homes because they can’t afford unregulated rent hikes,” said Minneapolis City Council Member Jeremiah Ellison last month. “The data is telling us that our most vulnerable communities are suffering the most.”

In 2018, in response to the housing affordability and homelessness crises slamming millions in California, AIDS Healthcare Foundation, ACCE, Eviction Defense Network, and other organizations successfully placed an initiative on the statewide ballot to repeal a law that placed restrictions on local rent control policies. Known as Proposition 10, it would have allowed municipalities to expand rent control. AIDS Healthcare Foundation, the parent organization of Housing Is A Human Right, spearheaded the effort.

In addition, California state legislators had been unwilling to pass strong rent protections — and activists believed they needed to act.

“The fight for renters’ rights pits us against the wealthiest industry in the world: real estate,” AIDS Healthcare Foundation President Michael Weinstein said recently. “The renters rights movement in the United States has not traditionally been strong as progressives have been slow to recognize how critical housing affordability is to people’s lives.”

Corporate landlords such as Blackstone Group (led by controversial billionaire Stephen Schwarzman, who served as a close advisor to Donald Trump), Essex Property Trust, and Equity Residential pushed back, determined to keep raking in billions by charging exorbitant rents.

Those Wall Street firms and other heavyweights in the real estate industry spent a whopping $77.3 million to stop Prop 10. The California Apartment Association, the powerful landlord lobbying group led by CEO Tom Bannon, also played a key role for No on Prop 10. By rolling out a misleading, multi-million-dollar TV ad campaign, Big Real Estate successfully confused voters and defeated the initiative in November 2018.

In 2020, AIDS Healthcare Foundation and Housing Is A Human Right put forth another measure — Proposition 21 — to reform, rather than repeal, statewide restrictions on rent control. Again, the California Democratic Party, U.S. Senator Bernie Sanders, and a broad coalition supported the initiative.

For Prop 21, Big Real Estate spent even more: an eye-popping $98.1 million. Along with protecting its massive profits, corporate landlords worried that both Prop 10 and Prop 21 would fuel a nationwide rent control movement. In the end, the deep-pocketed real estate industry, with help from the California Apartment Association, defeated Prop 21 in November 2020.

“While these campaigns galvanized movement activists,” explained Weinstein, “we could not overcome the huge financial disadvantage renters faced in these efforts.”

But, Weinstein pointed out, Prop 10 and Prop 21 pushed landlords into a difficult political position — more than ever, Californians were fed up with the status quo of unfair, sky-high rents. The measures, Weinstein explained, “forced [landlords] to agree to concessions such as a statewide anti-rent gouging law and a moratorium on evictions during the pandemic.”

Understanding the importance of the ongoing housing issue, President Joe Biden even declared that housing is a right.

“On some levels,” Alvarez, who had helped form the Downey Tenants Union, said at a council meeting in January, “we in the government have provided a response, but we must recognize that what we have done is not enough.”

The City Council voted down the request in February, but the Downey Tenants Union continues to fight for stronger tenant protections.

In Asbury Park, New Jersey, activists pushed the City Council into finally proposing, on March 1, a rent stabilization ordinance — a form of rent control. Asbury Park is a well-known beach town on the Jersey Shore that’s been undergoing a development boom, including skyrocketing rents. Asbury Park Affordable Housing Coalition has been pressuring the City Council to protect longtime tenants, many of whom are Black and Latino. The council will hold a public hearing on March 10.

In Minneapolis last month, the City Council approved proposed charter amendments for a rent control ordinance, taking cues from anti-rent gouging laws passed in California and Oregon. A charter commission will report back within 150 days.

“I am grateful to my colleagues for listening to the people of Minneapolis and taking this important step towards protecting tenants from egregious and unaffordable rent increases,” Council Member Cam Gordon said in a statement.

Other rent control movements are taking place throughout the United States — and for good reason.

“Amid the worst renter crisis in a generation,” a recent report by PolicyLink, Center for Popular Democracy, and the Right to the City Alliance noted, “it is time for policymakers to respond to the call for rent control to protect tenants from skyrocketing rents and displacement.

“Leveraging this powerful yet underutilized tool would have a tremendous payoff: if the rent control and tenant protection policies being debated right now in states and localities become reality, 12.7 million renter households will be stabilized. If adopted by states nationwide, 42 million households could be stabilized.”

Big Real Estate will fight rent control tooth and nail, but the momentum is with rent control activists. At some point soon, politicians will have to decide which side are they on.

(Patrick Range McDonald is the award-winning advocacy journalist for Housing Is A Human Right and a CityWatch contributor.) Prepped for CityWatch by Linda Abrams.