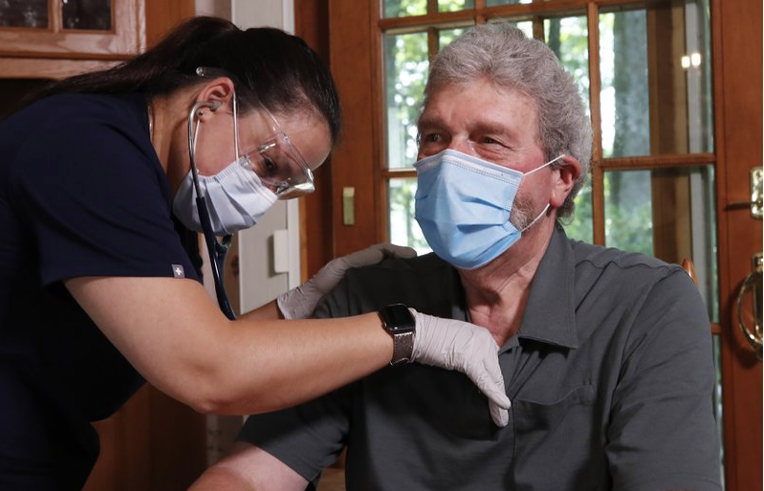 THE DOCTOR IS IN--Anyone who thinks that the "doom and gloom" and lockdown-lifestyle we have, and all the economic misery, mask-wearing, and social distancing that go with it, is a courageous, patriotic challenge for us all to get through together too often misses the mark.

Too many lives have been destroyed for anyone (like me) to give bad news with anything but regret.

But the virus, science, and economics all really don't give a damn about our individual or collective sentiments.

1) Calling COVID-19 a hoax is an overstatement in light of the 2-3 million who've died on planet Earth from this virus to date (to say nothing of those with long-term or permanent disability), but we've at times gone too far with the lockdowns, and not far enough with respect to what we're going to do about it.

2) And calling COVID-19 the end of the world is, too, an overstatement--it's effectively ended life as we know it for now, but if we put on our thinking caps we will open our society as fast and as comprehensive a manner as is humanly possible.

3) Part of that effort is demanding that those who've benefited economically from this pandemic pay more for those who've been financially knee-capped.

But I digress. Thanks to CityWatch for letting me publish these updates, and if anyone wants a quick summary of where I get my info, try MashupMD which is about as bias-free a website as any.

I also get my information from MPR, JAMA, and major newspapers and publications. Bias exists all around, but somewhere in the middle lies "the truth", or "the truth as we know it" while our knowledge of the virus, its economic and health impacts, and our vaccination efforts all evolve:

1) Unless you want to be a political hack, or a political fanboy/girl, it's not hard to conclude that Presidents Trump and Biden have a mixed record in the fight against this virus. Ditto for Dr. Fauci and all those Front-Line Doctors who have confused a frightened, exhausted, and less-than-educated American (and world) population.

a) KHN and PolitiFact reports that the Biden criticism of the Trump Vaccine Contracts is a stretch.

b) Politico reports that diplomats DID warn of a Coronavirus danger in Wuhan two years before the outbreak. There's a story behind the pandemic outbreak that has yet to be told, dammit, and the Chinese government and the WHO alike haven't been too transparent about it. Politically-motivated...but not transparent.

2) Reuters reports that things ARE getting better slowly with respect to vaccine administration, with the U.S. administering over 90 million doses of COVID-19 vaccines despite its herky-jerky and uneven rollout (which, to be honest, is probably to be expected, given human nature being what it is).

a) Anecdotally, the same seniors who comprise my patient population, and who last month reported major frustration getting their vaccinations, are virtually all getting them now. Some won't do it, but most certainly are and will.

b) Also, anecdotally, those seniors are NOT getting the side effects to the same extent that younger individuals with more vibrant immune systems(many aren't getting them at all!). Yet for those of us who do (me and my fellow health care providers sure got them!), it's not to be feared reports.

c) COVID-19 in nursing homes have seen a dramatic decline in both the number of cases and deaths according to the American Health Care Association.

3) But for those of us (like me!) who are "glass half full" in our collective outlook, it's by far too early, and probably a BAD idea, to minimize the terrible future of COVID-19 which has rocked, and likely will continue to rock, out world.

a) Some excellent news: in addition to spread of COVID-19 from touching surfaces, those with asthma do NOT appear to have greater risk of incidence of either catching COVID-19 or in getting vaccinated, according to Healio.

b) Yet the hoped-for use of ivermectin in minimizing the effects of exposure and infection of mild COVID-19 cases appears to be following the example of plaquenil, according to MPR.

These medications are both anti-infective and immunomodulatory but aren't demonstrated to make a difference in the double-blinded, randomized studies that are the gold standard of scientific evaluation. And no, I am absolutely NOT happy, and actually rather miserable, to learn of this information.

c) The New York Times reports that virus variants in Brazil and elsewhere are both rapidly-spreading and downright lethal, even in those who have already recovered from a previous COVID-19 infection. And the Times also reports that more contagious variants are spreading while the overall cases are leveling off.

d) Hence the growing fear that COVID-19 will continue--as with the influenza virus ("the flu")-- will be a recurrent seasonal infection is almost certain to evolve into an undeniable reality. Annual shots to keep up with this mutating virus, as with the flu, is something terrible but pragmatic for us all to confront...and I'm so sorry to throw this awful news at you reading this!

4) The only possible way out of the pandemic mess is mass vaccination, yet interest is waning, particularly among young people, as reports the Wall Street Journal.

a) Hence docwirenews reports that WHO director Tedros Adhanom Ghebreyesus warns against "Vaccine Nationalism". Not that I give a damn about the WHO this point, but this sentiment needs consideration...although I suspect most reading this do want America vaccinated first.

The AP reports, not surprisingly, that Europe is staggering while these infectious variants power a virus surge. Clearly, Americans do NOT want this to overwhelm our own nation.

b) And the collective mental health of many of us is deteriorating, as per cominto an agoraphobia (fear of the outside world).

5) The desire to reopen our lockdown lifestyle, and get back to normal, has different groups of individuals elbow-swinging to jump to the front of the vaccination line--again part of human nature and the desire to survive, but troubling from a humanitarian and scientific nature...and with political consequences.

a) Governor Newsom, amongst a growing likelihood of a successful recall election effort, just worked with legislators to strike a multi-billion deal with schools to reopen campuses, according to the LA Times.

Yet the teacher’s unions, particularly in large cities and urban regions, is having no part of that, they are insisting on vaccinations until schools can reopen.

To be fair, many concerns of the schools being unsafe to reopen are valid and accurate. Also, to be fair, some school districts are prioritizing schools much more than others. And the concept of teachers jumping ahead of grocery workers and restaurant workers merits a lot of debate.

b) BART and other mass transit ridership will likely remain low for years to come.

Clearly, the idea of close contacts with others, and the creation of super spreader events, should expectantly make many hesitant to use mass transit (and I and many others are pro-mass transit).

6) So, who benefits? Probably the counties that are more rural than others.

a) As the LA Times reports, some counties are moving forward with a nice and maskless lifestyle

b) Texas and other states are easing and lifting its mask rule, according to the U.S.News and World Report to the relief of some but the concerns of others.

I may be conservative in my political leanings, but I sure as hell question whether rural counties have the same situation as urban regions such as Houston and Dallas. Many younger liberals might like this, until a new wave of the newer COVID-19 variants kill or maim their older relatives.

So, there's cause for optimism, and cause for major concern, as our desire to end this pandemic lockdown brings out emotional feelings to go back to the normal life of 2019. 2020 may be over, but 2021 will be a mixed bag for Americans.

Which is all part of our human nature and our reality. But the truth remains the same:

The virus, science, and economics all really don't give a damn about our individual or collective sentiments.