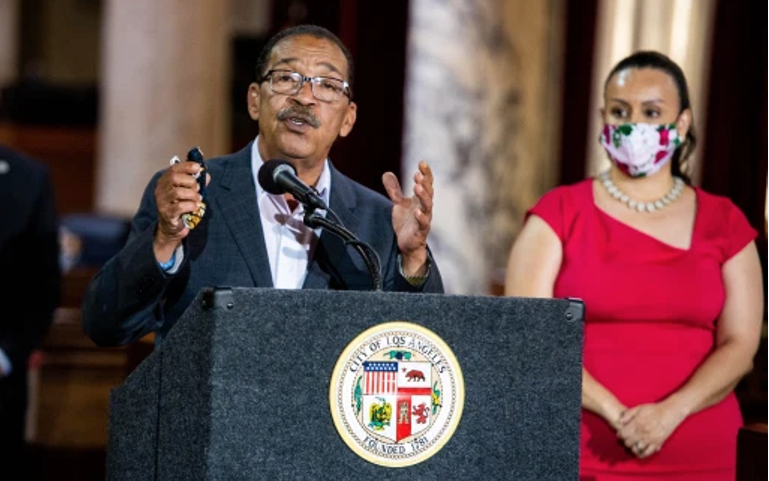 @THE GUSS REPORT-Set aside for a moment the huge FBI, LA City Hall corruption stories of recent months in which sleazebag former LA City Councilmember Mitch Englander is headed to federal prison for several years and Jose Huizar is desperately fighting charges that could send him there for the rest of his life.

Yes, set them aside because despite it all, micro-corruption continues to thrive in City Hall.

Earlier this summer, there was a remarkable verbal joust between current Councilmembers Joe Buscaino and Paul Krekorian over the former’s misuse of a rule to sneak-in agenda items without proper public notice under the guise of a quasi “emergency.” While Mr. Krekorian was right to challenge Buscaino’s micro-corruption, he has yet to make a case to stop its further misuse and neither has Council president Nury Martinez, in yet another example of her failed leadership.

Then there was the more recent issue when this column called for recusals of Councilmembers Paul Koretz, Herb Wesson and any other city official whose family stood to gain from the Separation Incentive Program, SIP, designed to give cash payouts to induce non-retiring city employees to resign due largely and ironically to the city’s torturous salary, pension and healthcare obligations. (They will tell you it’s due to COVID-19, but that’s just a catalyst rather than the root cause of the city’s financial chaos.)

Koretz immediately recused himself because his wife, Gail Koretz, has for years raked-in a six-figure salary as an aide to Mayor Eric Garcetti with her 2019 compensation being $114,115.68. (Please shoot this column a note if anyone knows why cushy gigs go to political spouses and children rather than middle-class people of color in this self-proclaimed “most progressive city council in America.”)

Anyhoo, no such recusal came from Wesson, a majority of whose family has been on the government payroll for years with the most egregious example being his wife Fabian Wesson falsifying her résumé into a quarter-million dollar gig with the AQMD, with Mr. Wesson refusing to recuse himself on related votes until recently being called out on it by this column. In fact, during Wesson’s City Council presidency, his reputation for retaliation may explain why some of his other family members landed overpaid gigs with, for example, Councilmember Curren Price. Again, why aren’t these jobs going to middle-class people of color who are not related to politicians?

So, while Koretz recused himself from the SIP debate and vote, Wesson refused to do so. That is precisely where Martinez should have stepped in to address the issue but failed to do so. Perhaps it’s because Wesson’s daughter-in-law Alexis Marin-Wesson is a handsomely paid ($123,386.00 in 2018) aide to Martinez. Marin-Wesson’s 2019 compensation is curiously missing from public databases, perhaps because it is rumored that she got a massive salary increase despite these troubled economic times.

That’s where Martinez’s loyalties are still misplaced in cronyism rather than solely in the public’s best interest. But don’t fret, my friends. A public records request has been placed by this column for Marin-Wesson’s 2019 and 2020 compensation and will be immediately shared upon receipt.

Oh – sidebar. The LA Times on Wednesday endorsed Mr. Wesson’s opponent, State Senator Holly Mitchell, for the LA County Board of Supervisors. Even hell freezes over from time to time.

(Daniel Guss, MBA, was nominated for a 2020 Los Angeles Press Club journalism award for Best Political Commentary and has contributed to CityWatch, KFI AM-640, iHeartMedia, 790-KABC, Cumulus Media, Huffington Post, Los Angeles Daily News, Los Angeles Magazine, Movieline Magazine, Emmy Magazine, Los Angeles Business Journal, Pasadena Star News, Los Angeles Downtown News, and the Los Angeles Times in its Sports, Opinion and Entertainment sections and Sunday Magazine, among other publishers. Follow him on Twitter @TheGussReport. His opinions are his own and do not necessarily reflect the views of CityWatch.) Prepped for CityWatch by Linda Abrams.