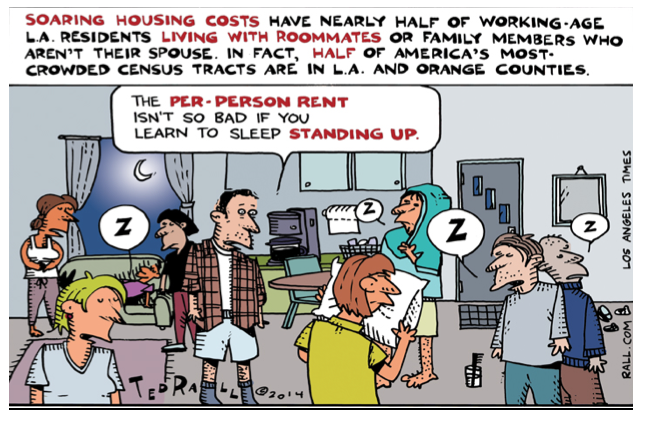 PLANNING WATCH-In Los Angeles the growing numbers of For Rent signs and homeless encampments are not random events.

They are closely linked, tied together by an elaborate network of laws and regulations, property records, and mortgages and leases, all propped up by the government’s police power.

Within this intricate web, Los Angeles, like other large cities, is trapped in a housing crisis without an apparent exit. Despite such pre-Pandemic measures as Measures JJJ and HHH, the chance that City Hall officials, counseled by campaign consultants, criminal defense attorneys, lobbyists, deep-pocketed advisors, and professional city planners could successfully navigate their way out of this crisis is nil. Given their tools and outlook, the options they offer work fine for real estate speculators, but at the expense of everyone else.

Furthermore, the Covid-19-induced recession has been a catalyst for unacceptable housing trends, such as overcrowding, that are getting worse.  Nearly half of the U.S. population already lives paycheck to paycheck. They do not have savings they could draw upon in a financial crisis, which means that the end of the Federal Pandemic Unemployment Compensation (FPUC) program on July 31, 2020, will drive millions more into destitution. According to the Los Angeles Times local homelessness will then increase by 20 percent. This situation could get much worse, however, if a lawsuit from the Apartment House Association of Greater Los Angeles succeeds in prematurely ending LA’s temporary prohibitions on rent increases and evictions.

Those caught up in these scenarios only have a few options to avoid joining the 40,000 people living on LA’s streets. If they can tolerate overcrowding and have generous friends or relatives, they can move in with them. Otherwise they can sleep in cars or, if possible, move to a lower-priced housing market. When these alternatives run out, the only one left is the street, which is why homelessness has already increased by 14 percent since last year. Furthermore, a new UCLA study predicts that 36,000 additional Los Angeles households will end up homeless because of the Pandemic and its economic crisis.

Established housing programs are no longer available: The tested responses to solve such a severe housing crisis have been scrapped: 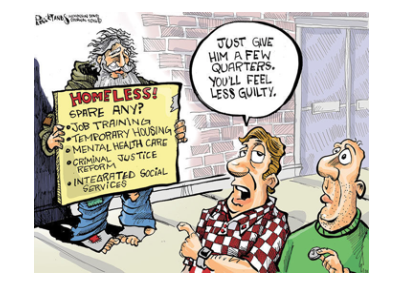 Local governments are in a bind: The one housing tool left to states and cities is up-zoning, through which municipalities hope that private investors will build affordable housing when offered higher profits through relaxed zoning laws. To do this, LA’s Planning Department has repeatedly contended that upzoning magically generates affordable housing. In fact, up-zoning does exactly the opposite. New units are not only expensive, but often replace demolished lower priced apartments.  The small percentage of the population that can pony up $4,000 or more per month for new luxury apartments does not include the recently displaced. Their growing ranks could never afford the expensive apartments that replaced the buildings where they used to live prior to their evictions.

This, in short, is why the private housing market is totally incapable of addressing the country’s housing crisis.  No matter how many times officials roll out up-zoning, environmental rollbacks, and permit streamlining, their solutions only make the housing crisis worse.

Flawed Housing Element: Into this deepening housing crisis Los Angeles has responded to State mandates by initiating an update of the General Plan’s Housing Element. To bridge the insurmountable contradictions discussed above, the new 2021-29 Housing Element must make bogus assumptions about future housing conditions in Los Angeles.

2) Los Angeles must up-zone parcels zoned for single-family homes in order to provide enough land to accommodate future growth. In fact, Los Angeles could more than double its population without changing its zoning. This is because all commercially zoned parcels can be used for by-right apartment buildings, most on transit corridors. Furthermore, the City’s two density bonus ordinances, SB 1818 and TOC Guidelines, allow these commercial parcels to increase their size, height, and density, supplemented by reduced parking and yard requirements, in exchange for promised but never physically inspected low income apartments.

3) If the City increases the amount of land available for investors to build apartments houses, real estate developers will leap at the opportunity. The resulting over-construction of apartments will force landlords to slash rents and increase the supply of affordable housing. While a convenient theory, it is has nothing to do with reality because developers and landlords are in the housing business. If they slash rents to make their vacant apartments affordable, their profits go down. They then face bankruptcy, an outcome far worse than higher vacancy rate.

Could Los Angeles solve is housing problems? The answer is yes, but it would have to reinvent housing, and the Federal government would need to pick up the tab. Housing could no longer be a commodity bought or rented from banks and landlords. It would require enormous amounts of investment in public and subsidized housing that would be made available to those who are now homeless, living in cars, couch surfing, or living in overcrowded conditions, either for free or at a nominal cost. The model would be schools, parks, or libraries, which are paid for by cities, but which are free to use.

This approach resurrects a basic tenet established by the Federal Housing Authority in the late 1930s. The private market is incapable of providing housing to the bottom quarter of the American public, and therefore, the public sector must fill this vacuum. If this made sense 80 years ago, it could be restored in lieu of letting the homeless live in squalor during a Pandemic, then calling in the LAPD to push them to another neighborhood.

(Dick Platkin is a former Los Angeles city planner who reports on local planning issues for CityWatchLA.  He serves on the board of United Neighborhoods for Los Angeles (UN4LA) and is co-chair of the new Greater Fairfax Residents Association. Please email comments and corrections to [email protected] or via Twitter to @DickPlatkin.) Prepped for CityWatch by Linda Abrams.