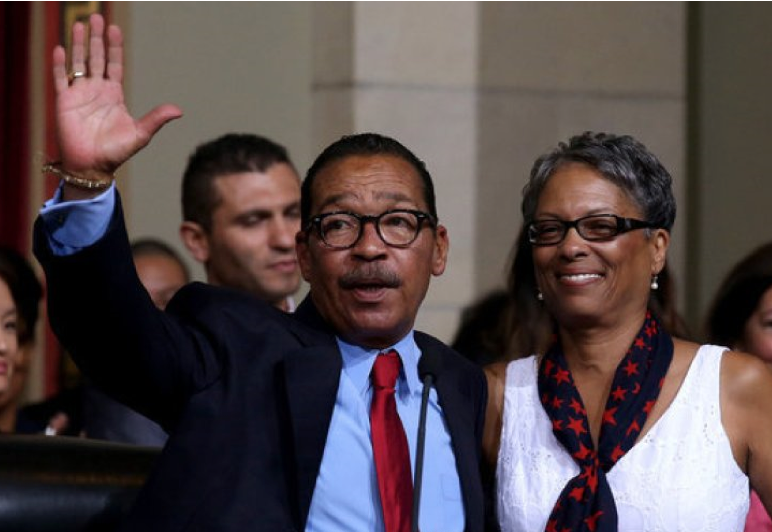 @THE GUSS REPORT-In “How Herb Wesson Cheated LA, Part 1,” this column updated how the LA City Councilmember manipulated (read: lied) about his residency and sundry other ways he cheated the public and how some members of his family did the same.

Today, we address how one of those family members falsified educational qualifications, landed a job with a breathtaking compensation package that was previously held by a Ph.D., and how the employer is running interference for la familia Wesson as this column conducted its inquiry.

First, kudos are due for the LA Times Editorial Board last week for endorsing anyone-other-than-Wesson for LA County Supervisor of the 2nd District. It chose California State Senator Holly Mitchell, who is endorsed by Gov. Gavin Newsom, former Gov. Jerry Brown and the leaders of both the Assembly and the state Senate. The Board also had laudatory things to say about the economic development qualifications of former LA City Councilmember Jan Perry.

The Times’ gently worded rebuke of Wesson stated he “has a backroom style better suited to a previous decade. On the council, (Wesson) has been heavily criticized for limiting public participation. L.A. County’s best steps forward over the last several years were results of the supervisors and others in power recognizing the importance of community leadership in shaping many county programs, especially juvenile probation.”

In other words, Wesson’s secretive conniving and bullying of the public played a role in the Times’ decision to say LA has had enough of the Napoleonic Wesson, as he was a continual abuser of the state’s public meeting law, aka the Ralph M. Brown Act. Interestingly, Wesson and Brown both served as Speaker of the California Assembly during their respective heyday.

Certainly, for that kind of money, one must have a heck of a resume.

According to her pages on LinkedIn and Facebook, Mrs. Wesson claims to have a Bachelor of Science degree in Human Services from the University of Phoenix, which is factually untrue.

She is not listed as an alumna of the University of Phoenix and even her AQMD bio says she only “attended” the school. She and Mr. Wesson refused to respond to requests for an explanation by this column. Here’s a click-thru of her false educational claims weighed against her AQMD bio.

While Mrs. Wesson has held a number of vague “consulting” roles serving political compadres of Mr. Wesson, one of her AQMD predecessors was Anupom “Pom Pom” Ganguli, now an instructor at UCLA, who earned a Ph.D. in Chemical Engineering from the elite Northwestern University, which in 2019 was ranked by U.S. News and World Report as the 12th best chemical engineering school in the world. Mr. Ganguli also has 33 years of experience in environmental and energy fields.

It seems that Mrs. Wesson may have received this job because the AQMD is led by one Mr. Michael Burke, who is married to former Congresswoman and former County Supervisor Yvonne Brathwaite Burke, who was Mr. Wesson’s boss from 1992-97, during which time Mr. Wesson was Brathwaite Burke’s chief-of-staff.

Given the drastic differences between Mrs. Wesson’s and Mr. Ganguli’s backgrounds and those of others who held the same job, I reached out to the AQMD to determine whether her job, which would be a 63- to 78-mile round-trip commute is of the telecommute variety and made a public records request to determine how many times during her employment so far her employee keycard was used to open locked doors on the sprawling AQMD campus.

Implausibly, but not impossibly, the AQMD says it doesn’t know and cannot find out which employee key cards unlocked which doors on any given day. But what is ludicrous is the agency also claims it doesn’t know when, from what device or location, and how often any employee, such as Mrs. Wesson, logs into her computer or email.

In other words, the AQMD claims it doesn’t know where its employees are, or what they’re doing at any given time, at least when it comes to Mrs. Wesson.

And that, my friends, is a load.

The AQMD also ran interference for Mrs. Wesson during this column’s inquiry. When I did a follow-up public records request to compare to the earlier one, its record keeper abruptly told me that the records requested months earlier can only be provided again with a new records request. But minutes later, the records were coughed up by this same gatekeeper. . .after a phone call threatening legal action for withholding them was made.

And yet, it’s still not enough.

A breeze through the LA City Council file system shows that Mr. Wesson voted on matters related to the AQMD, while he personally profited from his wife’s employment there, instead of recusing himself.  Members of the public have repeatedly expressed concern about Mr. Wesson’s conflicts of interest, but they fell on deaf ears before other Councilmembers, City Attorney Mike Feuer’s office and even the City’s rigged Ethics Department.

To get to the heart of Fabian Wesson’s qualifications for this $264,403.09 gig, this column submitted a new public records request for all documents related to her getting the job, including but not limited to any resume or application she may have submitted, because there are now three critical questions:

In other words, did the AQMD hire Fabian Wesson despite her substandard and falsified qualifications in exchange for Herb Wesson’s AQMD votes on, and his control of, the LA City Council agenda?

The system is corrupt, and it has for too long been rigged by Mr. Wesson. But make no mistake, if he does lose the County Supervisor race, he isn’t going away, but will resurface either through a curiously connected series of alcohol businesses or as a lobbyist. That’s because the public cookie jar is always open for business, and the politicians’ collective hand is always in it.

And the Wessons are hardly the only example. Fabian Wesson’s departmental colleague at the AQMD, Derrick Alatorre, the son of politician Richard Alatorre, in 2018 raked in $312,472.07 in total compensation and received more than $2 million in taxpayer-funded compensation since 2012 for his community affairs position, though his stated background is seemingly more substantial than that of Mrs. Wesson.

Just what’s happening at the AQMD, and how it appears to be an outlandish feeding ground for politically connected spouses and children, may soon be front and center.

Is this another City of Bell scandal in the making?