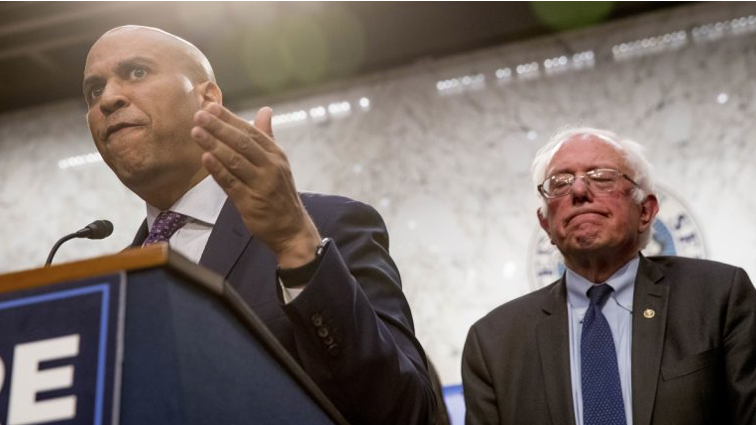 VIEW FROM HERE-In a Nov 27, 2018 blog, I argued that a Biden-Booker ticket looked unbeatable. I was completely wrong about Joe Biden.

His campaign tanked miserably and there is little chance that he can recover in time to be persuasive on Super Tuesday (March 3). To the shock of the Democratic establishment, Bernie Sanders has become the party's undisputed front runner. In a recent, forward looking article in the New Yorker, John Cassidy pointed out that "Sanders’s ability to forge such a big lead in California reflects his strength among progressives, young voters, and minority voters, particularly Latinos. . .But the divided nature of his opposition and the fact that only two other candidates are at fifteen per cent are also important. Given the way the primary is structured, this could end up greatly amplifying Sanders’s victory, in terms of delegates awarded to him."

With Biden all but gone, and the other candidates slipping out of the picture, perhaps, given Sander's current lead, I am still right about Corey Booker as VP. I do think Booker looks like the best fit for Sanders. First and foremost, Booker is a true progressive. According to his voting record in Congress, Booker is the 3rd most liberal senator. Along with Sanders, Booker has supported the Medicare for All Act and joined the Hell No Caucus (a group that has challenged Trump's appointees.) No one has been more committed to fighting for the rights of urban workers than Booker, whose humble yet inspiring ascent in New Jersey politics made him a celebrity. It must appeal to Sander's that Booker is the first African American in New Jersey to be appointed to the Senate, and a supporter of single payer healthcare. That's a potent combination that will make sense to Sander's loyal base.

Moreover, Booker brings a host of intangibles to Sander's campaign that are not easily found in other VP nominees. He is a relentless campaigner and surrogate. He is a sound debater who does not get sidetracked by petty insults and partisan cheap shots. In fact, Booker is one of the more bipartisan members of Congress, even vowing when he joined the Senate to have lunch with every Republican including people like Ted Cruz; he wanted to find common ground and believed getting to know opponents in person was essential. It doesn't hurt that Booker is also good on television and women generally favor him. (His girlfriend is the Hollywood actress and political activist Rosario Dawson.)

Speaking of the electoral map, Booker is an indispensable asset who shares strong support in African American and Latino communities. He is youngish (50) but also brings Washington experience and a certain wisdom that can only be gained by fighting in the trenches. What other City Councilperson willingly elected to live in the Newark "Bricks" in order to document the real conditions of minorities? When he was at Stanford, he started a crisis counseling program and when he was at Yale, he operated free legal clinics. If ever there was a candidate who shares Sander's enthusiasm for restructuring public policies that benefit real, working people, it is Booker. If sustaining current levels of support and revving up new African American and Latino voters is the goal, Booker is Sander's man.

All that being said, I think Sanders knows Booker and likes him. The two have worked together on various bills and each of them have taken an unwavering stance for freedom and truth, often calling out President Trump's relentless abuse of power. Like Sanders, Booker, for all of his overtures of bipartisanship, has never changed his position on Trump and what he stands for. Generally speaking, the Rhodes scholar from Stanford and Yale law school grad is smart, tough, savvy, creative, energetic, and guided by a moral compass. Who else would make a better candidate to run with if you are Bernie Sanders?

Most importantly, Booker can do the job if Sanders is unable to. A 78-year old president with heart problems needs to run with someone the nation can trust and believe in. If you are not an outright bigot, it is impossible to ignore Booker's intelligence, idealism, and inner drive to bring America back from the precipice of civil war-at least in terms of our civil discourse and shared values as a citizenry. He is a social liberal but an American first capitalist too. He is a grassroots warrior for the poor and a friend of billionaires (Mark Zuckerberg among them). And he has a vision, which is more than I can say for a conservative elitist and political opportunist like Bloomberg. As a politician who defies all categories and expectations, he makes an ideal choice to join the Sander's revolution.

(George Cassidy Payne is a freelance writer, adjunct professor of philosophy, and social worker in Rochester, NY. He has a master’s degree in theological studies and politics from the Candler School of Theology at Emory University.) Prepped for CityWatch by Linda Abrams.