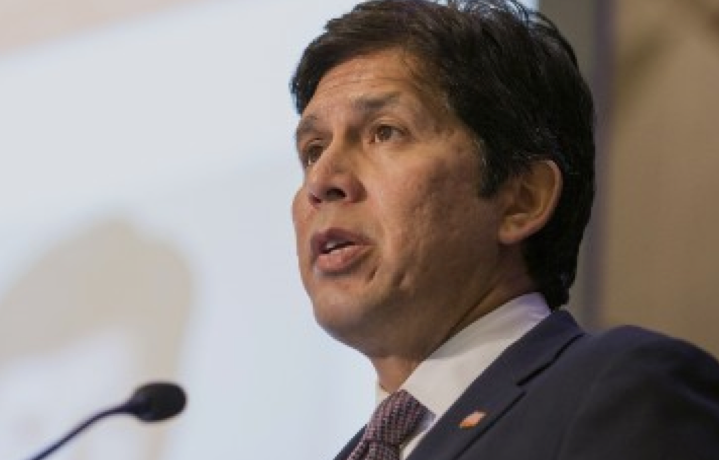 INSIDER REPORT-First, de León can best be described as a career politician. He served as both a California State assemblyman and State senator. He termed out of office.

He was then unsuccessful in his bid to be elected as a United States Senator. Even as he ran against Diane Feinstein, his tactics were cruel and underhanded. He referred to Feinstein as old and stated that she would be 91 years old at the end of her next term; he said she was anti-immigrant and there was a disconnect between her right-of-center policies and de León's far-left liberal political stance.

First let's look at his reasons and Decision for running for the CD14 council seat. Several months ago, de León met with several residents from the Garvanza area of CD14. He told them that his real motive for running for CD14 was not to be the next councilman for this area. If elected, it would be a solid stepping-stone to run to be the next Mayor of the City of Los Angeles. He (de León) did admit to these residents that he was being honest about running for Mayor; that he was not like Antonio Villaraigosa who told residents of CD14 that he would serve his whole term of office. De León also had no intentions of running for CD 14 until current CD14 Jose Huizar's wife Richelle Rios Huizar withdrew her name from the CD 14 race. Now, the majority of current and former CD14 staff members are assisting de León with his current campaign. After all, they have all been promised jobs if he is elected.

At several recent candidate events he stated that he was born in CD 14. That is an embellished statement and not factual. De León was born at the California Medical Center in Los Angeles in 1966. During that time period this area, now referred to as the South Park area of Los Angeles, was not located in CD14's geographical area. Currently, it is now located within the boundaries of CD14.

This residence, located in CD14, is owned by his former staffer Adrian Vazquez and his mother.

During the time period that de León was a state senator, he rented a room from a family in the Mt. Washington area. I might add, this is perfectly legal. But one can ask why De León never invested in a home of his own in the areas he represented. How can he now address the issues of homelessness, increased rents, increased housing costs, lack of housing, increased property taxes and increased costs of home repairs in our CD14 area? How can he honestly relate to these issues?

Real Interest in Our Community

One thing is for sure: during his tenure as an Assemblyman and State Senator very few people, if any, ever saw him in our CD14 community. He never attended any of our Community events, Concerts in the Park, Taste of Eagle Rock, Christmas Tree lightening events throughout CD14 and most recently, the 150th anniversary of LAPD and many more. Only now, as he is running for CD14, is he attending community events.

In fact, at the only Concert in the Park event he attended he arrived 40 minutes late because he did not know where Eagle Rock Park was located. At last summer’s Taste of Eagle Rock event both he and Adrian Vazquez acknowledged in front of several Eagle Rock residents and others in attendance that they both used a California State placard card (which allows one to park sometimes in curbed red zones and in front of curbed meters without paying) used by state employees who are on official state business. Mind you, de León, during this use of the state placard card (observed placed on the inside driver’s side window of a gray Volvo owned by Adrian), was no longer an elected state official and Adrian Vazquez was no longer a staff member of a state elected official. I guess they both could not afford to put money in a city meter or pay to park in a public parking lot. So much for honesty and integrity.

De León has presented himself as an environmentalist. But is he really?  De León along with Ricardo Lara and Ronald Calderon voted to oppose Senate Bill 405 which would have made it a state law to ban all plastic shopping bags. Why did de León vote no on this bill? It is well known in political circles in Sacramento that de León got first elected to a state office with the help of Fabian Nunez (known in Sacramento as de León’s “godfather”). Nunez himself is now a lobbyist with Murcary Public Affairs and represents American Progressive Bag Alliance. It should be noted that both the city of Los Angeles and the County of Los Angeles had already banned plastic shopping bags.

During de León tenure as State Senator he represented the city of Vernon. Both de León and Adrian Vazquez who stated that his expertise was environmental issues, walked the streets of Vernon 2011 and made contacts with all the businesses and residents of the community. De León voted to keep Vernon as its own city. Now the question is, since both de León and Vazquez knew all the businesses, factories and manufacturers in this small area, how did they not know the Excide (Battery factory) was releasing caustic chemicals into the air?

The Excide plant closed in 2015 and left a devastated area of lead contamination in its wake.  Thousands of homes in the Boyle Heights area have had their soil contaminated with lead and as of this date very little of it has been removed. A USC study showed that children who reside in this contaminated area have had their teeth tested positive for lead content. Studies have shown that young children exposed to lead develop severe cognitive impairment. Where was de León and why didn’t he do anything about the Excide plant during his tenure as state senator? Even now, during his speaking appearances for his bid for CD 14 he has remained mute on this topic.

Let's take a good look at de León's ties with the state elected good ole boys, many who are members of the Latino Caucus. First, there is Ronald Calderon, investigated by the FBI and ultimately incarcerated. Let’s not forget about state elected officials and the sexual harassment allegations. De León's close friend and Sacramento residential roommate, Tony Mendoza, was charged with sexual misconduct and was subsequently ousted from state office. Remember that de León denied any and all prior knowledge of Mendoza's sexual misconduct, even though they lived in the same household.

De León helped kill the initial whistleblower protection bill (which allowed staff members filing complaints because their bosses, state elected officials, made sexual advances towards them) and de León then criticized the hiring of private law firms to investigate the sexual allegations made by female staff members. Remember de León also kept quiet about the number of taxpayers’ dollars paid out to victims of sexual harassment and misconduct. All came to light because of the #MeToo movement.

Included in Kevin’s donor list is State Senator Scott Wiener, the Godfather of SB 50 (which was defeated again for the third time by state elected officials) who previously stated that it was “old fashioned” to own a home residence with a front or back yard. “We need to build upward.” Kevin de León, who does not own a home in CD14, supported SB 50. Let’s not forget that throughout the CD14 communities of Highland Park, Glassell Park, Eagle Rock, El Sereno, and Boyle Heights, most of the residents are single family dwellings.

And Then There’s CD14

Let’s look at those individuals who have donated to the Keven de León campaign for CD 14:

State Assemblywomen Wendy Carrillo (voted to fire special needs adults employed in a state medical facility because they were not union members and could not fill out a state application form). According to their employer, they showed up to work every day, did not call in sick and did a much better job than SEIU workers.

Richard Polanco. De León covered up financial records of pay outs for state elected officials’ sexual misconduct claims, over $2.5 million paid out to date. One of the older claims was against former state elected official Richard Polanco was for one hundred and two thousand dollars. This only came to light with the #MeToo movement and Polanco's intent to run for CD1.

De León has also accepted donations from major unions. At a recent candidate forum, de León declined to state from where he was receiving his political donations.

Where is the Transparency?

The first time I met Kevin de León face to face, he accused me of being anti-immigrant. I asked him how he could make such a statement when he didn’t even know who I was. He didn't want to hear an explanation. So, here is my explanation Kevin:

On January 22, the Northeast Democratic Club of Los Angeles held a “meet the candidate” forum.   Only one question per candidate could be asked. I raised my hand and asked Keven de León why he continued to tell everyone that he was born in CD 14? He became visibly upset and stated, “You Got Me.” I wonder how difficult was it for him just to tell the truth? Does anyone really care? Look what happened to LA City Councilman Alarcon after two trials.

Later at this event, de León came up to me and said, “You are sick, crazy and the police should detain you for a 5150 (Psych hold).” Many folks around the immediate area heard him. We all laughed. Then later at this same event, Adrian Vazquez who resides doors away from me yelled out in front of many people, referring to me in Spanish, saying I was a liar and I cursed out his mother. The fact is, I have never met his mother who does not reside with Adrian as per Adrian during previous friendly conversations. I could not even tell you what his mother looks like.

I have lived in my same home for 47 years and I know just about everyone within a two or three block radius. I am also the Neighborhood Watch Captain. I can say this: Adrian has never attended any of our Neighborhood Watch meetings, our community BBQ's or our block party events. Adrian also made other damaging statements about my attorney, which I should not make public at this time. But in the future, Adrian will have to repeat his statements before a Los Angeles County Superior Court Judge.