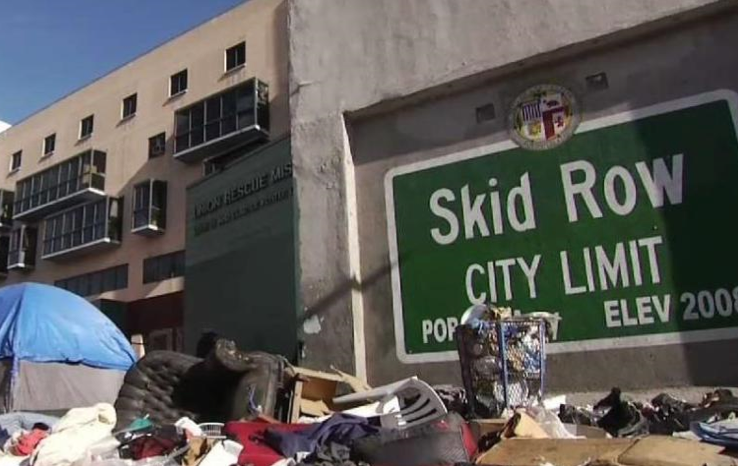 Many members of the Skid Row community were in attendance, as were various media outlets.

This legal matter has been ongoing for nearly three years since the April 6, 2017, Skid Row Subdivision election.

With emotions running high, and the Skid Row community hoping for a favorable ruling to officially be able to create its own city-certified solutions to homelessness (all neighborhood councils are certified by the City of Los Angeles upon becoming an official governing body), hope was in the air immediately outside the courtroom in LA Superior Court where everyone gathered on the eighth floor.

Only moments before the case was called, the judge issued his “tentative ruling.” It wasn’t good for Skid Row at all. Immediately the SRNC-FC legal team began to page through thousands of pages within its own court-filed binders full of evidence to find responses to how the judge indicated he was leaning.

With there being several legally-required “procedural facts” erroneously-omitted from the SRNC-FC’s court-filed documents, the judge never even considered any of the mountains of evidence produced against the City of LA due to the lack of legal citations, which instantly took the wind out of SRNC-FC’s sails. The matter quickly came to a screeching halt as the judge ruled in favor of the City of LA.

After a shocking defeat on election day, from which, years later, many Skid Row residents still haven’t recovered, they must now process yet another seeming defeat. An appeal is still an available option for the SRNC-FC, but the question now becomes: “As a Skid Row community leader and Chair of the SRNC-FC, how do I respond to this decision?”

In the lead-up to the election, people constantly vilified me on social media, defamed my character, slandered my name and reputation and spread flat-out lies about our community’s intentions for wanting to create a Skid Row Neighborhood Council in the first place.

Well, since I’ve been labeled “a thug,” “a criminal,” “a drug dealer,” “a pimp” and more, what if I turned to these false depictions of myself and began acting as “that guy”?

For instance, what if I vindictively encouraged all the thousands of homeless people I knew to become as aggressive as possible towards anyone who “looked like they voted against our SRNC-FC effort”? What if I embraced my “kingpin” status and activated all my Blood and Crip street gang “homies” to take over Downtown streets and establish a culture even more violent than already exists? What if I gave the word to “taint” all the street drugs that were sold to “the loft people” to punish them for voting against Skid Row?

What would Downtown Los Angeles look like if it suddenly became “extremely dangerous and violent” from what it is now by tenfold? To scare away tourists and their economically-infusing dollars would be a fatal blow to many businesses in DTLA if this type of climate were to exist for at least 90 days.

What if Molotov cocktails became the soup du jour? Could LAPD, who only has 10K officers total, effectively combat over 10K angry Skid Row residents for 90 days? How long would it take for The Department’s ranks to become emotionally depleted and thus subject to severe underperformance? What if word went out across the city for all homeless individuals and families to take over as many DTLA streets as possible, putting a significant strain on DTLA’s “homeless resources”?

Look around at the many streets throughout Downtown LA that already resemble third-world countries. The Skid Row Neighborhood Council doesn’t exist, so who’s to blame for the inhumane suffering we clearly see? Still, many choose to ignore it, hoping it will one day magically disappear.

How much longer will already angry Skid Row residents continue to wait patiently for help while the “poverty pimps” continue to reap billions of dollars from taxpayers?

Is the Chair of the Skid Row Neighborhood Council Formation Committee the guy who can start DTLA’s WWIII? Could he be as dangerous as folks say he is? Well, if the answer is yes, then hide the women and children because surely the defeat to create the Skid Row NC is just the thing to feed his devilish soul and activate his “deadly wrath of chaos and destruction” for all in DTLA.

Or just maybe, is the Chair of the SRNC-FC the type of Skid Row community leader who will simply file an appeal and focus on helping his fellow Skid Row residents, supporters and allies heal from such a shocking and devastating travesty at the hands of the City of Los Angeles and it’s allies (the majority of which are named in the SRNC-FC tell-all document titled “Addendum A”)?

Hmm.  How do I heal myself? Let me count the ways!

(General Jeff (Jeff Page) is a homelessness activist and leader in Downtown Los Angeles. Jeff’s views are his own.) Edited for CityWatch by Linda Abrams.