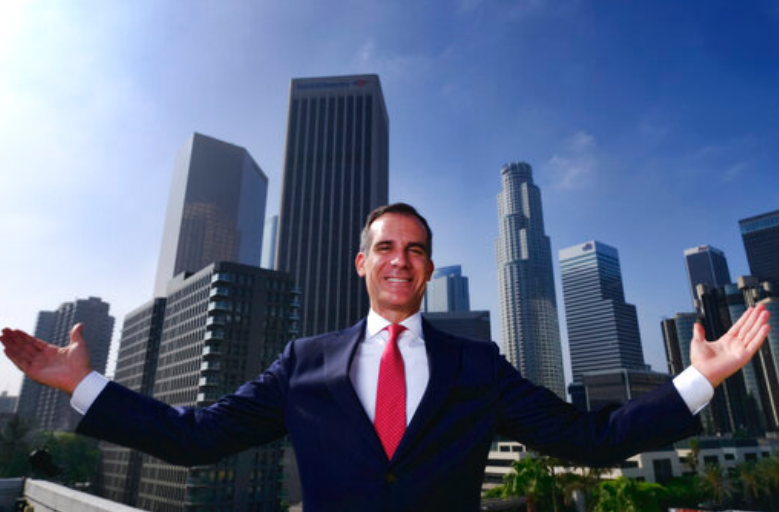 ONE MAN’S OPINION-The City of Los Angeles has moved beyond mere corruption: It is a criminogenic city.

This phenomenon is not new as I wrote in an article for CityWatch in June 2016. Criminogenic means the city itself has become a criminal enterprise in contrast to a sound society which might have some crooks pilfering from the city treasury. The person most responsible for the criminal nature of the city of Los Angeles is also our longest serving elected city official, Eric Garcetti. When Garcetti was elected in Spring of 2001, he brought with him his desire to Manhattanize first Hollywood and then the rest of the city.

While being interviewed this Sunday, July 7, 2019 on News Conference by KNBC Channel 4’s Conan Nolan (LA’s Super Garcetti Sycophant), Garcetti denied any and all responsibility for Los Angeles’ gross deterioration. Ours is a city plagued by a homeless crisis, rats, fleas, diseases, the worse GINI Coefficient of any large urban area in the U.S., a continued ridership abandonment of the rapid transit system (despite Garcetti being not only on the METRO Board but often its President), exorbitant housing costs, and the federal courts’ rejection of his mistreatment of the homeless. The only thing more amazing than LA’s decline during Garcetti’s long tenure is his continued assertion that he accepts responsibility. Trump is not the only politico who gaslights.

This is Garcetti’s modus operandi. He denies any role in creating problems while declaring that he accepts responsibility for fixing the problem. Since Garcetti was CD 13’s councilmember, we have seen him use this ploy – denying his role in causing problems and promising pie-in-the-sky solutions which never materialize.

Crime is Not that Hard to Comprehend

The essence of crime is to take something that does not belong to you. Garcetti’s massive “property crimes” result is not only the transfer of billions of dollars to the 1%, but along the way, but the suffering and deaths of uncounted Angelenos. Why are those deaths uncounted? For the same reason Trump will not allow any more cameras inside child detention centers at the border – to conceal reality. Garcetti used this ploy in Hollywood where he had the LAPD systematically under-report crime. As the SLOs (Senior Lead Officers) told residents at Neighborhood Council meetings and other homeowner associations in the Hollywood Hills, residents had to use certain code words before a crime could be counted. The LAPD was not happy with this systematic fraud on the public and the city constantly claiming that crime was decreasing when it was, in fact, increasing. Hence, the SLOs told people the code words. Eventually Garcetti was caught and the LAPD was allowed to report actual crime statistics.

In 2015, it was revealed that the LAPD had been under-reporting crime for eight years, making the crime rate in the city appear much lower than it really is. Approximately 14,000 assaults went unreported as "minor offenses" rather than violent crimes.[4] Additionally, recent years have seen increased crime in the city. – Wikipedia, “Crime in Los Angeles.”

The year before, in January 2014, Judge Alan Goodman ruled that Garcetti’s Update to the Hollywood Community Plan was intentionally based on “fatally flawed data” and wishful thinking to the extent it subverted the law. In layman’s terms, Garcetti knowingly committed fraud in order to concoct a false and misleading community plan to justify the billions of dollars of gifts he was giving his developer cronies.

As Patrick Range McDonald reported in 2013, Garcetti’s Manhattanization of Hollywood was a form of ethnic cleansing of Latinos. And as Director of Planning Gail Goldberg said in 2006, Garcetti’s allowing developers to set zoning was leading to disaster.

Garcetti’s criminal enterprise is based on fraud – he habitually lies while he consistently funnels as much wealth as possible to the 1%. Garcetti not only used the CRA to divert cash away from public services to his developer buddies, but he accelerated the densification of their properties. The more density allowed, the more a developer can cram onto to his property and charge higher rents. Concentrating density in The Basin has meant that those offices are not located in the north part of the valley and are not interspersed as low-rise garden office centers among new residential neighborhoods -- two land uses that are very compatible. Angelenos should realize that densification transfers land wealth from the middle class to the 1%.

Garcetti is not dumb. His degrading of the quality of life in LA was not due to his inability to foresee the consequences of his policies. High density attracts more people than low density and hence LA now has the worse traffic congestion in the entire world. Not only have landowners in the valleys lost wealth to DTLA, but people are forced to commute, paying in time or money or both. Garcetti uses the nightmare traffic the same way he uses the Homeless Crisis – to stampede an unwitting electorate into approving hundreds of billions of dollars more in bonds for unnecessary mass transit.

Garcetti’s Criminogenic City Has its Supporters

When Judge Richard Fruin declared in December 2016 that the Los Angeles City Council’s conduct was non-justiciable, he sanctified LA as a criminogenic city. “Non-justiciable” means that the LA City Council is above the law, and thus, it does not have to adhere to criminal laws.

Likewise, Judge Doofus Mitchell Beckloff does not want anyone to study advances in telecommunications such as telecommuting, Virtual Presence, TelePresence (Cisco ©), email, Portal, broad band high speed internet, etc. Telecommuting helps explain the decline in ridership on mass transit along with other factors like ridesharing services and the flight of Family Millennials. There is not likely to be any more judicial faux pas like Judge Goodman’s ruling on the truth about Garcetti’s Lies and Myths.

Instead, Garcetti can count on the state court judges to cover up his criminal enterprise. A path is being cleared for the $320 million Vermont Busway to become an $8 billion light rail system. Then will come the demand to super-densify the corridor to pay for the light rail system which will naturally destroy thousands more rent-controlled properties.

The Criminal Connection Between Density and Mass Transit

Along with the active assistance of Pravda West (LA Times) and the courts, Garcetti has been able to perpetuate the frauds underlying densification and transit. Let’s remember Garcetti has worn two hats for years: METRO and City of LA. Both are yielding increasing disasters for Angelenos and yet with the help of Judges Fruin and Beckloff this fraud will not stop. The purpose of subways and fixed rail mass transit has been to tie mass transit to specific buildings in order to give the landowners a competitive advantage. Since fixed rail mass transit is horrendously expensive to construct and then to operate, as soon as a system is proposed, Garcetti and his cronies claim we need more density to have enough ridership to pay for the subways and trains. It is a criminal scam to perpetually loot the taxpayers.

If Los Angeles had decentralized and de-densified, there would have been no need for subways or fixed rail transit. Landowners far from The Basin could have reasonable office complexes and the land wealth would be spread throughout the greater Los Angeles area. Similarly, traffic would have been dispersed.

Now to the Garcetti’s $13 Billion Gift to Developers

Garcetti’s proposal to help those who are suffering on the streets of Los Angeles due to his mass destruction of the apartments of LA’s poor is to have Congress give $13 billion to places like Los Angeles to pass on to his developer cohorts. This is Garcetti’s most successful ploy – create a crisis and then demand that billions of dollars be given to his buddies. Garcetti, Pravda West and Sycophant Nolan never mention that Garcetti not only created the Homeless Crisis by destroying the homes of over 60,000 poor people, but then used their plight as photo-ops to get Angelenos to vote for billions more in taxes and bonds to help the 1%. Now Garcetti wants $13 billion while he continues to destroy poor people’s homes.

For a craven politico with national aspirations, Garcetti sees personal benefit in getting Congress to appropriate $13 billion when only a few billion will go to other mayors.

Power corrupts and corruption destroys; yet, we stand by doing nothing. How many times do We the People have to watch how this criminogenic city operates before our silence turns us into co-conspirators?