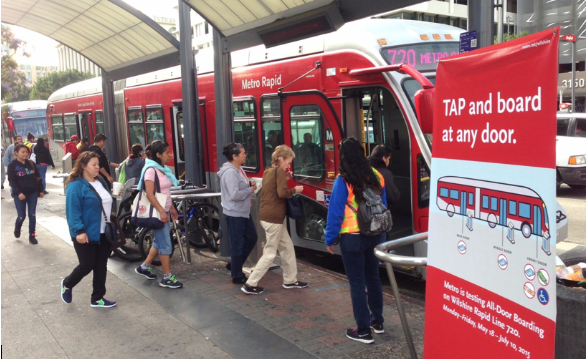 When taking buses I calculate which bus stop I need to catch a particular bus to start my travels for the day, taking into account walking to the bus stop, the time of the trip, what time I will exit the bus to walk to my destination or transfer to another bus or train, and how long that second ride will take and then walk to my destination.

Driving is similar, but with more assistance to commuters in anticipating changes or delays than is given to bus riders.

When driving to work I watch the news and check maps and road condition apps to see if there could be delays, and then make the calculations for the time to walk to the vehicle, get in, start the engine, the drive-time, parking, and walking to the destination. If I drive the same route consistently I will make note of the road side warnings of traffic delays and put that into the calculations.

These advance notices of traffic changes and possible delays are of great assistance to drivers. However, for the buses I ride there is a frustrating lack of advance notices of changes, such as closures, to bus stops. Sepulveda Boulevard through Westchester leading to LAX has had too many bus stop closures without advance, and this is extremely frustrating.

When there is that rare advance notice of a temporary closure of a bus stop, I can then make plans to find another nearby bus stop, or take another bus if possible. This gives me a chance to navigate the transit system to get to my destination.

But when the bus stop I depend on is closed without advance warning, I am then lost, and thrown in to a very frustrating situation of denial of transit service.

One of the worst no-advance-notice bus stop closures on Sepulveda Boulevard was done by Los Angeles Street Services when one Saturday without warning to bus riders or drivers they repaved six lane Sepulveda from Centinela to Manchester Avenues. This reduced Sepulveda to one lane in each direction. Traffic was gridlocked.

That morning I walked to my bus stop on Sepulveda expecting to catch the bus according to my calculations to get to work, but the stop was closed without advance notice.

But what finally set me off in my inquisition to who is in charge of bus stops was later when the bus stop I use was again closed without warning, this time for the removal of trees along Sepulveda for street a landscaping project.

Culver City Bus which services Sepulveda in this location can only give advance notice of a temporary closure of a bus stop when informed by those who will be working in front of or near the bus stop necessitating its closure, either within Culver City Departments, or an outside city department like Los Angels Street Services.

Again, and again with this landscaping project, over the years Sepulveda bus stops were closed without notice, causing bus riders delays and frustrations.

These unannounced closures built up frustrations over the years, and led to my need to know who is in charge of bus stops to help my bus riding, and to try to improve the bus riding experience for others.

My inquiries were completely fruitless.

I first went to the city government and called Los Angeles Councilman Mike Bonin’s office whose district covers my closed bus stops. Through my ire I explained the situation, and asked who is in charge of bus stops. The first rep I spoke with did not know, so I was handed off to his superior who also didn’t know, but said he would call me back with information. I am still waiting in what looks like a ten month wait.

Not satisfied I went to county government and called Metro since surely as one of the major transportation agencies in the nation they would know who is in charge of bus stops. The first service rep artfully and skillfully took my call, but could not provide the information, and upon my insistence transferred my call to his superior could not provide an answer. He too said he would return my call, and ten months later I am still waiting.

Who is in charge of bus stops to help bus riders not face the dilemma of unannounced bus stop closures?

To reduce gridlock and pollution from vehicle exhaust governments encourage us to ride buses and trains. In the Los Angeles Basin air pollution is increasing, and the global threat from climate change is accelerating as poignantly and frighteningly written in other City Watch articles. Action is needed now to reduce throwing carbon gases into the atmosphere by reducing our driving and as the alternative ride buses and trains.

Yet, in my experiences in transit riding, the city, county and state offices I contact seem ignorant to the needs of transit riders and their dependency on bus stops, and this ignorance creates a less than happy transit riding experience.

With my experiences in mind, and suffered by other bus riders, those who wish to reduce their carbon footprint and try to ride buses as promoted by government will come across situations of such red hot raising frustrations without solutions nor answers from governments that they will go back to driving, and the whole idea of reducing pollution and global warming carbon gases by riding transit becomes a terrible farce.

And I still don’t know who is in charge of bus stops.