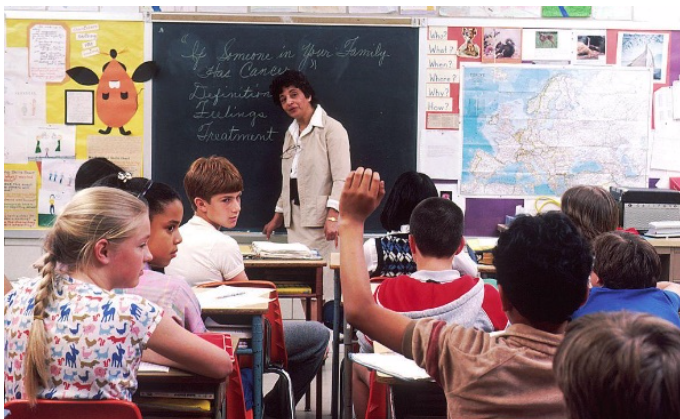 EDUCATION POLITICS-Carolyn Torres was one of 10 new replacement instructors when she began teaching 10th grade at Alliance Cindy and Bill Simon Technology Academy High School, a charter school in South Los Angeles — a replacement figure, she claims, which represented a 33 percent turnover in one year at Alliance.

In subsequent years, Torres said, she would see how Alliance hired young teachers — usually rookies — who came under stress due to a lack of job security and a culture of testing and micromanagement created, in her opinion, “because of an assumption that teachers don’t know how to teach.”

Teacher burnout has long been a topic among educators. The Internet is filled with articles with such titles as “How Close to Teacher Burnout Are You?” and “Teacher Burnout or Demoralization? What’s the Difference and Why It Matters.” Although job fatigue occurs in every profession, it’s been known to afflict teachers at a higher rate than other kinds of employees. This is especially true among teachers in charter schools, which are publicly funded but run by private or nonprofit groups under a contract with a state or school district. Federal data for the 2012-2013 school year show that teachers leave charters at higher rates than at public schools.

Torres admitted that while she appreciated the small classes at Alliance, they didn’t always translate into a better education.

“It was constant pressure and threatening to change grades if you did fail too many [students],” she claimed — adding that the college dropout rate for Alliance grads is high. “Kids come back and say, ‘We weren’t prepared.’”

Responding to Torres’ claims, the principal, Chris Carr, said that the school rewards teachers with better pay than they would find at traditional schools and gives them the “flexibility and professional support they want, need and deserve.”

He added that “first generation scholars,” like the ones his school serves, face unique challenges when going off to post-secondary institutions. “We are focused on ensuring that they not only get into college, but that they thrive and graduate from college,” Carr said. “We are not near the college graduation rates we want, but our scholars persist at three times the rate of low-income students of color nationally.”

Torres currently teaches at an Orange County district high school in Anaheim, where she feels much less testing pressure and enjoys more job security. Most teachers at charter schools, unlike their traditional public-school counterparts, are at-will employees with fewer job protections.

Torres began her teaching career at Alliance in 2013 but, according to research data and interviews conducted for this story, her experiences are not unusual in charter schools across California and the U.S. today. Although she and other teachers and researchers admit that every school is different, some disturbing trends have emerged within charter schools over the past decade.

A 2018 study, “Stay or Go, Turnover in CMO, EMO and Regular Charter Schools,” published in the Social Science Journal, revealed that teachers leave charter schools that are managed by private, for-profit groups at very high rates. The study, based on data from the 2011-2012 school year, also showed that:

Between 2000 and 2016 the portion of public schools operating with charter agreements increased from two to seven percent in the U.S., according to the National Center for Education Statistics.

In Los Angeles, a 2018 study comparing charter- and traditional-school teachers between 2002 and 2009, found that elementary-school charter teachers saw 35 percent higher turnover than their traditional public-school peers. And the gap is even wider at the high school level, with charter-school teachers nearly four times more likely to leave than their peers.

“The conventional wisdom, which our study backs up, is that charters recruit very young teachers,” said study co-author Bruce Fuller, an education and public policy professor at the University of California, Berkeley. Fuller added that teachers are also more likely to be white in charter schools than in traditional district schools, and many received their education background through the nonprofit teacher-recruitment organization Teach for America, rather than at a university or college.

“[CMO management] will say this in small groups but not to reporters — that they want younger teachers because it saves on wages and benefits,” Fuller said. “Our study shows that younger teachers are more likely to leave than older ones. There is no benefit to staying longer. Science-oriented STEM teachers were also more likely to leave in both charter and private schools, possibly because they had more lucrative opportunities in the private sector.”

Although average salaries in charters are lower, average salaries of charter teachers and traditional teachers may be like comparing apples and oranges, according to Bruce Baker, a professor in the Department of Educational Theory, Policy and Administration at Rutgers University.

“Sometimes [salaries are] only marginally higher if we can account for contract months,” Baker said. “That is, charter teachers are getting paid more to work more hours/days/weeks. They also tend to have smaller total student loads, so if we were to run a calculation of the charter-teacher salary per student served [by that teacher] the figure would go up, relative to district school counterparts.”

But Baker admitted that it may be difficult to make a direct comparison between charter schools and public schools in terms of teacher longevity and pay, because many charter schools are fairly new and therefore are less likely to have teachers with decades of experience or at the top of the pay scale (though some charter-school teachers claim there are no pay scales at their schools).

Experts say it’s not necessarily lower pay that causes so many teachers to leave. Recent federal data show that 55 percent of both charter-school teachers and traditional public-school teachers are dissatisfied with their salaries.

Growing anecdotal evidence and studies point to several causes, including the startup-like culture of some charters, which leads to “seat of the pants” teaching, as well as inadequate help from administration for charter teacher burnout.

Rachel Schlosser, a fourth-grade teacher at Los Angeles’ Para Los Niños elementary charter school, turned to teaching after working as a grant writer for a nonprofit organization. She had considered going to a district school but was drawn to PLN’s smaller class sizes and student-centered approach. Now, however, she said it’s “student-centered at the expense of teachers.”

She claimed that the school is currently not investing in its teachers: It’s not providing enough professional development or support, nor adequate guidance for handling disciplinary problems, a science curriculum or a long-promised resource library. (Para Los Niños’ administration did not respond to requests for comment.)

“The administration can make or break your experience,” Schlosser added. “If you are not your best self and not feeling supported, the students won’t benefit. Teacher burnout is real.”

Indeed, the “Stay or Go” study showed that the levels of support from administrators for teachers were closely tied to teachers’ decisions to walk away. And teachers aren’t the only ones feeling the urge to move on. A study of New York schools shows that charter-school principals are much more likely to leave than their public-school counterparts.

At least one CMO has boosted its efforts to retain teachers in recent years. Maria Alcon-Heraux, a spokesperson from KIPP Foundation, said that formal “teacher pathways” for career advancement, biweekly coaching from administration or instructional coaches and bonuses of $10,000 for the best teachers helped the organization retain 73 percent of its teachers in 2016-17.

Still, that 73 percent retention rate is lower than public schools overall in the U.S. According to the National Center for Education Statistics, of the 3,377,900 public school teachers employed during the 2011-12 school year, 84 percent remained at the same school.

Not every charter teacher suffers churn and burn. Darcy Segura is a middle-school special-education teacher at The Accelerated School (TAS) in south Los Angeles. She came from a district school, Gardena High School, which is part of the Los Angeles Unified School District, and took a significant pay cut because she liked the flexibility and lack of hierarchy at TAS. But she’s also found that being represented by a union, United Teachers Los Angeles, has given her job security as well. TAS went on strike in January, concurrent with the LAUSD strike, and it was settled with the pay increases teachers sought and with some measures to increase job security.

Segura admits that she still spends longer workdays than she would at a district school. And she said teacher turnover in previous years at TAS has been very high, something she hopes will change with the improved contract. “When there is high turnover you have to reinvent the wheel every year,” she said, referring to procedural changes in and out of the classroom.

It’s still fairly unusual for teachers at charters to be represented by unions, which represent little more than 11 percent of America’s 7,000 charter schools, according to the National Alliance for Public Charter Schools. That percentage is higher in some cities — Los Angeles’ share is more than double the national average, according to a UTLA representative.

Union representation at charters is increasing, said Randi Weingarten, president of the American Federation of Teachers. (Disclosure: This website receives funding from the AFT.)

“Schools should not be sweatshops and testing factories,” Weingarten said. “It is driving teachers away, along with performance-based pay. They want to have a living wage. Now you’re starting to see the notion of paying for experience to get teachers to stay, and in the last three to four years you have seen much organizing.”

She added that most operators fight unionization “tooth and nail” and that AFT doesn’t advocate for organizing unless the teachers want it.

In Chicago 34 of 121 charter schools are unionized, according to Chris Baehrend, chair of the charter division of the Chicago Teachers Union (CTU).

Baehrend formed the Chicago Alliance of Charter Teachers in 2009, soon after he landed his first job at a charter alternative school called the Latino Youth High School. Not long after he got his class assignment, Baehrend said, he saw some ominous signs for teachers.

“They fired every teacher the previous year, but they didn’t say why,” Baehrend said. The principal told me, ‘I usually fire half of the teachers every year.’”

There were also no computers and no textbooks, according to Baehrend. His claims were echoed by two other teachers who started with him.

Teachers at this same school, which is operated by the Pilsen Wellness Center, went on strike last month, after they had been negotiating a new contract since October. It was one of several charter-school teachers’ strikes to hit Chicago in the last six months. Baehrend, who’s now a full-time organizer after his union merged with CTU in 2018, said in all of those strikes teachers and the union got everything they wanted, including new teaching standards, plus more pay and benefits.

“The churn is crazy at these schools, but less so with a union. People take the jobs because it is a job and they might have no idea what others are paid or what they should be paid.”

Rachel Schlosser added that charters, when done well, can benefit students and teachers with instructional freedom. “But so many [schools] are doing it very badly.”

(Larry Buhl is a writer and radio producer based in Los Angeles. He's a regular contributor to Art & Understanding, ATTN:, and DeSmogBlog. He has produced for the BBC, Marketplace, Free Speech Radio News and Pacifica radio This piece appeared in Capital & Main.) Photo: Michael Anderson. Prepped for CityWatch by Linda Abrams.