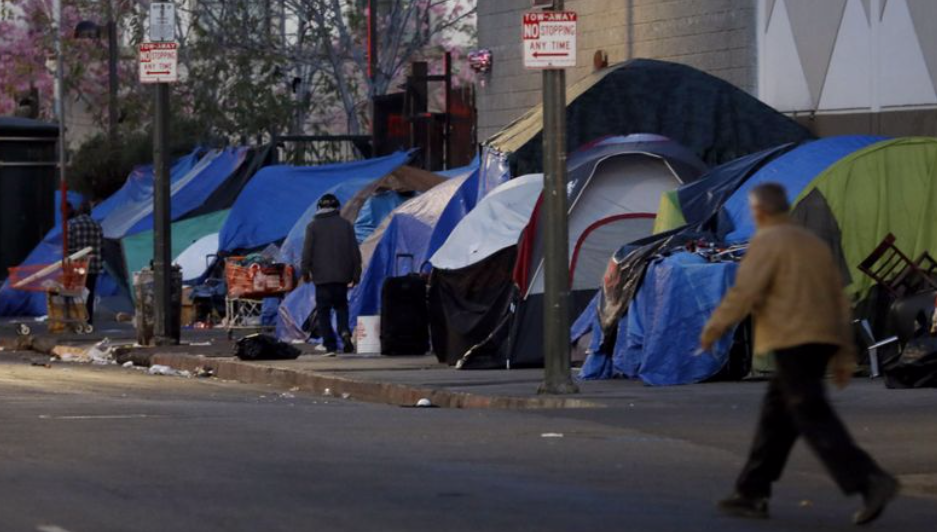 EVICTION … ANOTHER WORD FOR GOODBYE--Joe Ryes was homeless and living on the streets for five months in Los Angeles when he died of a heart attack on August 20, 2018. He was 56 years old. After he died Los Angeles City Council held a moment of silence in his honor.

Reyes had lived eleven years in his Koreatown apartment when the building was sold, and he was evicted when the new owners evicted all senior citizens including him. Then he lived in a tent on the street with his cat Jessabel near his old apartment. He got food stamps and tried to get odd jobs but found out people pay the homeless cheaply. On a video on youtube he said he couldn’t get a steady job because he’s disabled.

On July 11, 2018, Joe just didn’t see a posted notice of the coming LAPD cleanup of his campsite. He left his tent in the morning, and when he returned, he discovered the LAPD had taken his possessions. He said they took “everything—my heart medication, my contacts, my clothes, my new sleeping bag, my new tent, my cat’s stuff I can’t replace.”  Jane Nguyen, who works with Shelter for all Koreatown, said that Joe “was devasted because this was everything he owned. The only things that he had remaining were just the clothes on his back and whatever he had in his backpack.” She added, "He was so motivated to get off the streets and into housing. All he wanted was to be in a home with his cat.”

Reyes’ neighbor on the street Diana has also lost many possessions in the numerous sweeps. Three years previously Diana lost her glasses and clothes in a sweep: “They’re just rude. I’ve ended up with no clothes, no glasses. I haven’t been able to get my [new] prescription glasses….” According to the Los Angeles Homeless Services Authority Joe and Diana are among 400 people living on the streets in Koreatown.

Some activists said the frequent police sweeps were a cause of Joe’s death since the second sweep took away his heart medication a 2nd time. He complained of feeling increasingly stressed after the two police sweeps.  In these routine sweeps the LAPD and workers from the L.A. County homeless agency and sanitation department are supposed, by city ordinance, to tag and store the homeless people’s possessions that are confiscated. KCRW’s report “A vigil for Joe Ryes shines a light on dying homeless” said instead the homeless lose their crucial documents and medications. Homeless advocates “have sued the city, alleging the officials are unconstitutionally seizing people’s property.”

People who knew Reyes said he was a quiet and charismatic man. Mike Dickerson, a volunteer with a Shelter for All Koreatown, said “Joe meant a lot to us. We were always excited to see him and his cat Jessabel during outreach, and Joe was looking forward to moving into the bridge home shelter built at Wilshire and Hoover.”  Reyes’s friends joined a Shelter for All Koreatown people in a vigil in his honor 8 PM – 10 pm on Friday August 31, 2018, at Wilshire-Vermont Plaza. Another Shelter for All Koreatown volunteer Christine Johnson said she met Joe this last summer when she in her third trimester of pregnancy: “Even though he’d lost almost all of his belongings in a sanitation sweep weeks before, when I had my baby he sent a present of baby clothing he’d chosen especially for her. Our family was incredibly moved.” People at the vigil said more homeless will die until the emergency shelters are opened, but Mayor Garcetti has planned shelters with 100 beds in the 15 council districts that can only house 1,500 of Los Angeles 22,288 people who live on the street in 2018.

Councilmember Herb Wesson, who represents Koreatown and attended the vigil, said, "The police department and the new chief recognizes that we need to do better," he said. "To help people like Joe, it's going to take the public to change the mindset of the public." Wesson added that city is building a large homeless housing facility in Koreatown with medical services. "I think if Joe would have had a place to stay it would have saved his life," Wesson said.

In the last weeks of Joe Ryes’ life Shayla R. Myers, an attorney for Legal Aid who knew Ryes, said every day after the sweep he was “in violation of city ordinances at least five times over. His makeshift shelter, which replaced the tent that had been taken … was unlawfully tied to a nearby tree. It was impermissibly up during the day, to provide some relief from the 90-degree heat. He had a cart to carry his belongings—a forbidden ‘bulky item’—and it looked like he had more than would fit in a 60-gallon trash can, the amount allowed by law.” As attorney Myers talked with Ryes, they sat on the sidewalk, another violation of LA’s law which outlaws sitting, sleeping, and lying on the sidewalk.

Myers said that she was in the City Council Chambers in 2015 and 2016 when the council members passed these laws that made Ryes a criminal multiple times for living the street as the council members tried with these laws to get rid of the visible signs of homeless people such as their tents, sleeping bags, cars, etc. The City Council members then never addressed then needs of the 22,888 people in the city of Los Angeles living on the street each night in these years.

Finally, this year Mayor Garcetti and the City Council have decided to put short-term shelter housing in each council district. The first one “A Bridge Home” opened in early September 2018, at El Pueblo, the origin of Los Angeles downtown, and another shelter housing was planned for Joe’s neighborhood. However, Myers added if Ryes wouldn’t as he hoped to get one of the few beds in the Koreatown shelter, he would have faced even more police sweeps that Mayor Garcetti promised neighbors of the proposed shelter.  Myers said, “I an angry that he died on the streets of Los Angeles, and angry that every day he was homeless on the streets of Los Angeles considered him to be a criminal. “After the City Council had a moment of silence in honor of Ryes, Myers said, “I am happy that they will be standing in the council chambers to honor Joe, but it is the same council that made him a criminal.”

In 2017 831 homeless people died, and homeless experts predict 900 homeless people will die in the city of Los Angeles in 2018. According to the Daily News, “Cardiovascular disease, pneumonia, diabetes, cancer, cirrhosis, severe bacterial infections and other treatable conditions were all listed as causes of deaths reported by the Los Angeles County Office of Medical Examiner and released last week by the county’s Department of Mental Health.”  Joe Reyes could not get the medical treatment he needed with the police sweeps.

In the beginning of September 2018, the 9th Circuit Court of Appeals, ruled that it’s “cruel and unusual” punishment to crack down on the homeless unless they can access shelters. Los Angeles had its 2018 a homeless count:  22,888 people living on the streets and 8,398 living in shelters to make a total of 31,285 homeless. Will the city of Los Angeles stop enforcing its many laws against the homeless which the court rule as cruel and unusual punishment?

From 2008-2014 Los Angeles had a density bonus program to encourage developers to build more affordable housing which resulted in only 329 low-income apartments being built. In November 2016 voters approved Measure HHH that allocated $1.2 billion that Los Angeles voters to build 10,000 housing units for low-income and homeless Angelenos to be funded by a new city property tax. In 2018 Mayor Garcetti has promised to build a new homeless shelter in each of Los Angeles’s 15 city council districts for 1,500 people. But these measures will only house 1/3 of the city’s homeless leaving 2/3 without homes. Los Angeles’s homeless policies are designed to fail.

Reyes said on the video before he died, ‘Don’t become homeless if you don’t have to …. and you’ll live longer.”

(Julia Stein is a poet, novelist, and literary critic now living in Los Angeles. She has published five books of poetry: Under the Ladder to Heaven, Desert Soldiers, Shulamith, and Walker Woman, and What Were They Like? Stein is also co-author of the book "Shooting Women: Behind the Camera.)