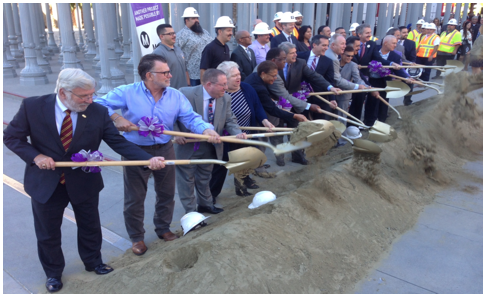 ALPERN AT LARGE--It's safe to say that 2017 wasn't much less of an emotional roller-coaster than 2016, and perhaps that was by intent.  Americans appear, perhaps more for the better than the worse, focused more on politics and the "soap opera" in D.C. than their previous devotion to "reality T.V.”, and all political forces (along with their media allies/patrons) are milking that focus for ratings and dollars. (Photo above: Assembled dignitaries break ceremonial ground on the 4-mile Purple Line subway extension in front of LA County Museum in the Miracle Mile.)

Local political races have gripped the nation's attention, and the blue/red American divide appears to remain somewhat of a (thankfully) bloodless civil war, with both major political parties having their own raging internal wars.

And at the end of this year, a GOP-only tax reform (and somewhat of a GOP "wish list") was voted in that is likely to shift the spending and investment of the citizenry for years to decades to come.  Truly, as the expression goes, "elections matter", much to the horror or bliss of individual Americans.

We will probably see Transportation/Infrastructure (T/I) dominating the domestic budget fight in D.C., and it will certainly have implications in both Sacramento and in Los Angeles.

For worse or better, and for better or worse, President Trump tends to keep his promises and will push for a $1 trillion effort to fund T/I.  Senate Majority Leader McConnell is loathe to revisit ObamaCare repeal, and although House Speaker Ryan would love to tackle welfare and entitlement reforms, 2018 is a midterm election year, and T/I is as bipartisan an issue as ever.

As I stated in my previous CityWatch article, there are some very ugly questions that Californians must ask themselves, and they are very likely to have implications on the upcoming Transportation/Infrastructure budgetary debate:

1) WHY are our state and local taxes so high?

2) WHAT are we getting for them?

3) WHAT about sales taxes, fees, gas taxes, etc.?  Because they're going up, and are not deductible?

PREDICTION #1: The Californian rich and upper middle class are getting soaked, and this process may have powerful implications on how Sacramento and Los Angeles spends money on transportation/infrastructure.

As I write this, and as you read this, millions to tens of millions of Americans are now each prepaying thousands to tens of thousands of dollars to their state governments to grab one last chance of higher federal tax-deductibility of their State And Local Taxes (SALT) and home loan interest payments.

Both the federal tax-deductible limits of SALT (previously unlimited, now $10,000 maximum per year) and interest on home loans have been sharply reduced, which will predominantly affect blue states like California, New York, and New Jersey.

While this GOP-only tax reform vote in Congress certainly has both economic and political goals, the important debate over merit or flaws of the passed bill is NOT the purpose of this column.

The fact remains is that the ability of Sacramento and Los Angeles City/County to raise their income taxes, property taxes, utility taxes, etc. (and or to keep these taxes high) has suddenly and instantly become much less tenable than they were a few short weeks ago.

It is not hard to conclude that the debate over transportation funding (roads, local rail, high-speed rail, transit, etc.) will have a much higher volume than before, and tangentially-related budgetary issues (pension reform, education funding, disaster/first-responder funding) will also dominate the next gubernatorial/state campaign in 2018.

PREDICTION #2: The recently-passed gas tax will NOT be repealed unless a major political change occurs in California, thanks to ... Big Oil!

Sometimes things happen by design, and sometimes by happenstance, but this gas tax, while infuriating to many, appears to have been taxed at a time when fracking and oil booms (think drilling in Alaska, approval of large gas pipelines, etc.) have caused a powerful and relative drop in gas prices.

The gas tax has approval of even the California Trucking Association, because most Californians support the $5 billion or so per year that will be raised for transportation, and appears (among those polled) to be a necessary "user fee" for a legitimate cause.  To date, efforts by some Republicans and anti-tax groups to repeal the gas tax are not polling well with Californians...however...

... the cost of gasoline is so low that gas prices have not significantly raised in our improving economy, but should those gas prices go upwards of $4-5/gallon, this could entirely change.

... and as the economy improves, the relatively-low gas prices are not encouraging commuters to ditch their cars for alternative bus/rail transit.

PREDICTION #3: The verbal wars and congressional standoff between Republicans and Democrats could have dramatic impacts on how T/I funding is spent in Washington, and how the funding and projects are prioritized.

Although T/I is popular from a bipartisan perspective (at least compared to other issues), the invitation of President Trump to Democratic Congressional leaders may end up the same way as the recent tax reform bill:  Democratic leaders make a few "bottom-line" demands, President Trump and Republican leaders say "no", and then it's a one-party game and votes get passed, accordingly.

Yet Democrats are more likely to spend on T/I and on domestic spending than the fiscal hawks who dominate the GOP, and (as with hurricane/disaster relief) President Trump will have no trouble making a quick deal with House Minority Leader Nancy Pelosi and Senate Minority Leader Chuck Schumer for more if Republican leaders decry deficit spending for T/I.

So perhaps the BIG question is not IF but HOW the transportation funding will be spent.  Raising money/funding is NOT the same as the annual appropriations dogfight that occurs every year, but ...

President Trump is much more pro-rail as a New Yorker than are most Republicans, but with even Democrats concerned about the cost of Governor Brown's pet-project (California High-Speed Rail), the focus of spending on bridges, subways in major urban thoroughfares, and flood prevention could have dramatic impacts on which states benefit, and/or which T/I projects benefit, from increased funding.

PREDICTION #4: The immigration and sanctuary city/state fights may have major impacts on T/I spending from the federal government to the state's and cities' budgets.

It's no surprise that President Trump has major differences with Californian leaders as to the appropriate policies to those here illegally, and it's not the purpose of this article to debate the host of important issues raised by the undocumented/illegal immigrants among us.

However, President Trump and Attorney General Sessions are both very, very likely to raise this topic if or when California (which lately, led by Los Angeles) demands more T/I funding from Washington, D.C.

Fighting President Trump, declaring cities off-limits to access by immigration enforcement officials, and other moves that run contrary to a rapidly-evolving federal approach to law enforcement and employment policies ... also run contrary to asking the federal government for more money.

The timing of the very recently-passed tax reform bill might be a precursor to the bigger funding showdown by a President who is a persona non-grata to many (if not most) Californians, in that local state funding has been hampered by the aforementioned reduction of the tax deductions most upper income (and higher tax-paying) Californians enjoy.

California and other sanctuary states may have to be willing to really put their money where their collective mouth is, at a time when their ability to do so has been majorly hamstrung.

The one true prediction?  That T/I will be a major hot topic in our news/political cycle in 2018, and that the implications from this hot topic will both entertaining and disconcerting to the commuters, taxpayers, and citizens of Californians, including traffic-plagued Angelenos who appear to be driving their cars more than ever.