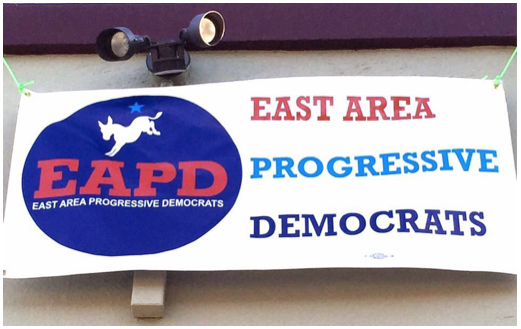 EASTSIDER-A few weeks ago I wrote an article about the upcoming Special Election to replace Jimmy Gomez in California’s 51st Assembly District. In that column I characterized an internal fight over the process followed to endorse a candidate as a “kerfuffle.”

Some readers called me out for essentially blowing off an important issue, and to my chagrin, they are right. In all candor, how can I complain bitterly about the slimy tactics that Eric Bauman used to maintain his hold on the California Democratic Party, and at the same gloss over loose or questionable actions by a local Democratic Club?

To be fair, the EAPD is not Eric Bauman, neither are they the lone ranger in failing to clearly state to the troops how stuff works. In the runoff for CD1, the Northeast Dems’ criteria for becoming a voting member of the club seemed to be at odds with years of precedent – specifically, that you had to be a member for some period of time before being able to vote on endorsements. Suddenly, 30 days and you can vote. This left well over 100 folks suddenly control the runoff endorsement.

Criticisms by members who were unhappy with the endorsement process center around three issues: (1) there was no particular or special notice sent out to members prior to the meeting date regarding who was running and who would be present for an endorsement vote; (2) members did not know in advance which candidates were sent questionnaires inviting them to compete for the club’s endorsement, or for that matter, which candidates would be present at the endorsement meeting; (3) a majority of the Board members were already supporting Luis Lopez -- the President of the EAPD is his partner, thereby creating an arguable appearance of a conflict.

Having no clue as to how all this actually works, I obtained a copy of the club’s Bylaws from another member, and also met with someone who had questioned the decision making process. The EAPD Bylaws aren’t available through their website, but neither are the Bylaws for the Northeast Democrats, and I suspect the same is true for most political clubs. Seems this would be an easy fix.

As a relative newcomer to the EAPD, the biggest issue raised was why a club would endorse prior to the final list of candidates, or in this case, before there’s an official election at all. This because Jimmy Gomez didn’t actually go to DC and get sworn in until very recently, so there couldn’t be a Special Election for the 51st AD.

The timing issue is one you can argue either way. In the case of the EAPD, they have made a convincing case that endorsing early and getting behind a candidate all leverage impact on the election itself. This can advantage candidates who are not “establishment” and not backed by big bucks.

The downside, of course, is timing and the possibility that the EAPD will miss out on a candidate who has not announced early on. The Bylaws do not prohibit such a process, and on balance, I tend to support the Board’s position, since the club continues to grow rapidly and has indeed had an impact in recent races. At the same time, the argument is legit.

The subtext of all the other arguments center around whether or not the existing process provides transparency and openness, as opposed to being an insider thing controlled by the Board itself.  Here the answer is trickier.

As a relative newbie to the EAPD, I was surprised by the dearth of communications to members. For example, the club meets on the same day and time each month, but the actual email notices/reminders are often sent just a few days before the monthly meeting date. And in terms of the actual agenda, I don’t recall receiving it as an attachment to the monthly email. Rather, I got it as a handout the night of the meeting, a short 1/2 page agenda.

From reading the Bylaws, it turns out that there is a relatively straightforward process for endorsement, although I was not aware of that until obtaining a copy of the Bylaws. Essentially, when the Elections Committee decides to set up an endorsement process for a race, they send out questionnaires to all of the candidates that they know are running, and then, based on verifying the answers, someone contacts the candidates to invite them to the endorsement meeting.

The questions raised at the EAPD meeting mainly had to do with whether or not the Board was being impartial since the President of the club is the partner of candidate Luis Lopez. Evidently, a majority of the Board had already pledged their personal support to Luis before the call went out for candidates and the endorsement meeting was set.

There are two different answers to these questions. Speaking as a lifetime bureaucrat and mediator, the legal answer is likely that there is no case. Boards are granted broad authority and the general standard used to overturn their actions in court is whether or not they have “abused their discretion,” as opposed to being right or wrong. It’s a high standard.

But perceptions are important and any perception of foul play or stacking the deck has to be addressed -- the Dems are not such a supermajority that they can afford a split in the ranks.

So, the implied question/criticism has to do with whether or not the club (and most other Democratic clubs as well), could do a better job, at least in the future, to make it clear that their endorsements are done in an open, transparent and fair manner. Here the answer is that the criticisms are quite valid, and need to be addressed.

I am not picking on the EAPD. I’m only using them as an example because there were legitimate criticisms of the AD 51 Endorsement process that left a bad taste for a number of people. Of course I’m also writing because a number of readers of my column were bothered enough to provide (valid) criticism of my finessing the process by calling it all a “kerfuffle.” Keep it up. Keep all of us honest.

And the same question of legitimacy applies to the actions of any number of democratic clubs including the Northeast Democrats (NEDC), or the LA County Democratic Party, or big time to the actions of Eric Bauman and the State Party. Especially since we know for a fact that Bauman’s actions have never been objectively addressed as he refuses to allow an inquiry.

If the Democrats seriously want to take back the House and the Senate, as well as try to maintain their razor thin supermajority in California’s Senate and Assembly, then they really need to pay attention to the troops and potential troops. They need to show that bottom-up small “d” democracy is real and that they actually do outreach, listen and pay heed to every single point of view before deciding on a plan, or an endorsement.

There is no single solution, but making the effort is critical. In the case of the EAPD, there are some simple steps which could be taken. Personally I do think that the early endorsement process has given the club much more political juice in elections than waiting for the special interests/establishment to buy the front runner, but that is a legit subject for discussion.

To allay any questions of legitimacy, a simple step would be to put the Bylaws and/or Article XIX (the Endorsement Process) up on the website for everyone to see. Another idea would be to agendize a discussion on how to visibly preserve neutrality in the endorsement process, and whether or not a non-Involved, non-Board member or group should handle the actual endorsement outreach and portion of that month’s meeting.

Just a few ideas which may or may not be useful but are worth considering. Unlike the State Party, we need to make sure that we are honest-to-golly inclusive of everyone, as opposed to legally correct.  Bernie Sanders’ success was largely due to exactly this kind of inclusion, respect, and mobilization of a very large group of people.

So let’s turn people on, not off, and have a better democratic party.