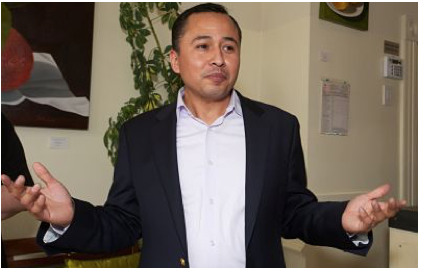 That could mean that we are looking at a primary sometime in the fall, and the runoff (assuming that no one gets 50% plus one) as late as early December. Goodness. Well, nobody ever said that California’s political process had any basis in logic.

The Candidates Are Lining Up

According to Around the Capitol, there are already some 9 candidates who look like they are all in for the race:

With a district composition of something like 61% Dems, and 26% Decline to State, you will not be shocked or amazed that all the candidates so far are Democrats. Of course, we don’t know yet exactly whether or who Eric Bauman and the California Democratic Party establishment will try to hail as the “next great thing” for this election cycle, but stay tuned.

I don’t know if it counts as the establishment pick, but evidently Christina Garcia (D-Bell Gardens) and the Democratic Women’s Caucus have stated that the next assembly member must be a woman, and recently endorsed Wendy Carrillo.

It is unclear what vetting process, if any, the Caucus went through on the way to their endorsement. I only mention this because in the CD34 Primary election, there were around 10 women candidates, and of that group, Maria Cabildo actually received the most votes. Furthermore, she was endorsed by the LA Times.

For those of you who don’t get all excited about Assembly District politics, or Northeast LA politics for that matter, I don’t blame you. The current AD51 boundaries were all changed in 2012 as a result of the California Redistricting Commission, and now includes pieces of communities that used to be in AD 45 and AD44 (like Glassell Park and Eagle Rock.)

In the first contest for the newly reshaped District in 2012, two candidates, Luis Lopez from Eagle Rock and the Democratic establishment pick, Jimmy Gomez of Echo Park, wound up in a runoff.  Backed by the Eric Bauman led Dems, a number of unions, and outside cash, Gomez outspent Lopez something like three to one in the general election. Not to mention the party machinery of Parke Skelton SG&A Campaigns, and their phone banking muscle. Interestingly, Lopez only lost to Gomez 40 to 60 percent.

Luis Lopez is the first contender to have a campaign office and to launch a campaign. I attended the event last Saturday June 24 at the campaign’s new HQ on Colorado Blvd. and there was a standing room only crowd.

As articulated by his partner Hans Johnson, Luis’ background and interests fit the Bernie mold.  Homegrown, son of immigrants, product of our local school system and champion of public education, not charters, career in nonprofit healthcare clinics serving immigrants and seniors and people with HIV, and the real deal on homelessness, LGBT rights, and environmental advocacy. He even did a stint on the East LA Planning Commission, learning the real ropes of politics. He is grassroots all the way.

Most of this I knew. However, to me the big surprise were the three endorsers who came out on a Saturday morning to speak at Luis’ event: political activist extraordinaire Jackie Goldberg, State Controller Betty Yee, and State Senator (D-25th) Anthony Portantino.

For those relatively new to the District (as we became the “hot new thing” in real estate) or those semi-permanently avoiding all politics, these three politicians all shared the Bernie revolution values long before there was one.

Jackie Goldberg is a long time Northeast LA political activist, former LAUSD Board Member and President, LA City Council member and our representative for years in Sacramento (D-AD45). As I recall, she was the first openly gay elected official back in the day, and has always been a proud, UC Berkeley alum with the rhetorical gifts that make her an able grassroots rabble-rouser.

Anthony Portantino, our current Senator from the 25th, is an unlikely politician. Coming from the entertainment industry, he got the Jones for politics and was on the La Canada/Flintridge City Council. Mentored by Carol Liu, he succeeded her in the 44th AD. I met him when he personally went to every Neighborhood Council in his District, and believe it or not, gave out his personal phone number. Even more astounding, he actually answered the calls, too. Personally. A super grassroots person, the Dems like Eric Bauman and (thankfully forgotten) former Speaker John Perez treated him poorly, threatening to cut his budget and put his staff on unpaid leave after he failed to fall in line with Perez’ draconian budget cuts to the safety net. Honest, you can read about it here.

And then there’s Betty Yee, our State Controller. Daughter of Chinese immigrants to San Francisco, Berkeley grad, MPA Golden Gate University. She scares some Dems who like to ride the gravy train of special-interest money and consulting gigs that trade on the party’s status in state government. She can also actually do math (not the forte of most politicians) and spent enough time on the Board of Equalization to really know how the State works. She ran for State Controller against Assembly Speaker John Perez in 2014, a three way race with Republican Ashley Swearengin (R-Fresno).

In the ultimate grassroots campaign, she drove up and down the entire State of California to talk to folks and become known by people outside of the Bay Area. Talk about a squeaker, she ultimately beat Perez for the second spot runoff by a scant 481 votes! Perez, a sore loser if there ever was one, demanded a recount, a first for statewide office in California. Until it was clear that he was going to lose anyhow, and he threw in the towel.

Yee went on to handily defeat Republican Ashley Swearengin in the runoff, 54/46%.

All this is a long way around to say that Jackie Goldberg, Betty Yee, and Anthony Portantino are serious small “d” Democrats, who have walked the walk and stood for from-the-grassroots upward, authentic values Bernie Sanders personified last year as the Bernie revolution happened. To me it says a lot that these three politicians would personally come forward to endorse Luis Lopez.

Tuesday evening, the East Area Progressive Democrats met, mostly to do an early endorsement for the yet to be formally announced 51st Assembly District race. How’s that for early? The club now has some 800 members, and is evidently the largest Democratic club in California. Congratulations, and in keeping with their heft there was a standing room only crowd of well over 100 at the meeting.

I should also report that, before the presentations by those candidates appearing to make their case for endorsement, there was quite a kerfuffle over whether the club rules had been followed and if there had been enough advance notice for endorsements to be made at this meeting. Ultimately it was determined that all the candidates had been invited to fill out a questionnaire, most had done it, and of the ten current candidates, five had agreed to show up and were present for the endorsement meeting.

At the same time, the officers pledged to try and do more outreach the next time, but insisted the rules had been followed. By an overwhelming hand and voice vote, the membership agreed to move forward with endorsements.

The five candidates who did appear were Ron Bimbaum, Frankie Carrillo, Wendy Carrillo, Alex De Ocampo, and Luis Lopez. I can’t give them all their due in this column, which is already becoming a too long, but it was clear that all are knowledgeable, qualified, and seriously interested in grassroots representation of the District.

Ultimately, there were 107 votes tallied, with Luis Lopez receiving 80, for 75%. Since the club has a 60% requirement, he is now endorsed by the EAPD. Running second with 10 votes was Wendy Carrillo.

The only reason I go into all this history is that we have seen a seismic shift in Northeast LA politics over the last 10-12 years, with redistricting at every level from City Council to the California Legislature, and a vast demographic shift as once forgotten places like Chinatown, Echo Park, Edendale, Highland Park, Montecito Heights, Silver Lake, and Cypress Park, Glassell Park, Eagle Rock, City Terrace, and East Los Angeles have become gentrified. Many friends and neighbors living here all their lives have been forced out because they literally can’t afford the rents.

It’s a heck of a district and, as Wendy Carrillo pointed out, one where too many people forget about the City Terrace and East Los Angeles parts of the District in favor of the more upscale portions.

I’ve never seen such active campaigns begin before the incumbent has even left the current job. Since there is no announced Special Election yet, any number of other candidates could come forward between now and election time, so stay tuned. As the other candidates get their campaigns up and running, I’ll try to keep track of them as well and provide everyone with current information on this race. The election promises to be a window into the changing composition and chemistry of our communities.

For now, Luis Lopez has been quick out of the box and seems to be the candidate to beat.