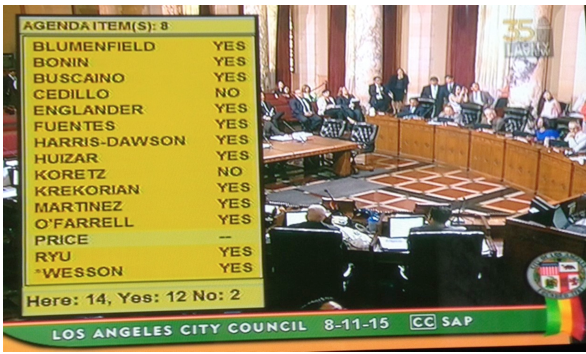 On Sunday, October 30, 2016, The LA Times broke its article about the massive money laundering operation at Los Angeles City Council. The thing which makes the money laundering, i.e. illegal campaign contributions aka bribes, effective is the City Council’s unlawful vote trading agreement. Each councilmember agrees to always vote yes for each other councilmember’s project, and as a result of this agreement, projects are unanimously approved over 99.9% of the time.

This vote trading is not deference – no matter how many superior court judges want to look the other way. Deference does not result in unanimous approval 99.9% of the time. The US Attorney Eileen Decker just put away State Senator Ron Calderon for 42 months saying that it is a crime to buy a vote with cash. It is equally criminal to buy a vote with a return vote, but Attorney Decker conveniently forgets that Penal Code 86 criminalizes Vote Trading in city councils.

When one looks at the amounts of money which were laundered for LA City Council politicians including Mayor Garcetti, one realizes that the lynchpin of the corruption is the criminal vote trading agreement. No developer will pay hundreds of thousands of dollars without a guarantee that the councilmember can deliver the city council’s approval no matter how many laws his project breaks.

The thing which makes the money laundering feasible is the guarantee that the councilmember can deliver. The favor can be as simple as needlessly tearing down Marilyn Monroe’s Valley Village home as Councilman Krekorian did or as massive as the Millennium Towers in Hollywood or the Sea Breeze project in the LA Times article. It does not matter. If a councilmember puts it on the city council agenda, it gets unanimous approval.

Without the guarantee which the Vote Trading Agreement brings, developers could not afford to bribe a majority of the City Council. Those bribery cost would be much more than the money to one councilmember. Imagine how much the final councilmember’s vote to make a majority would cost a developer! Assuming that developer did spread around enough cash to buy a majority, he certainly would not squander more money to always buy every single councilmember! The very fact that we have ten years of unanimous approval proves that we have a vote trading agreement and not occasional deference.

Under the Vote Trading Agreement, each councilmember knows that he/she can guarantee the passage of any project which he/she places on the city council agenda. Once an item is on the agenda and the council president calls that item, it receives unanimous approval. Councilmembers do not even have to vote since the Council’s vote tabulator votes yes for each councilmember.

Do not expect the criminal vote trading agreement to disappear.   The courts have ruled that it is beyond the power of the courts to question anything which the City Council does. In considering the unanimous approval of thousands of projects, the court ruled in the SaveValleyVillage #2 case that the city councils’ actions are non-justiciable. That means the courts will turn blind eye and a deaf ear – no one will ever be allowed to have a trial to put on evidence.   The court threw out all such cases as non-justiciable. No matter what state laws the City Council breaks, the Court says that their behavior is beyond the reach of the law.

The combination of open and notorious money laundering, i.e. cash bribery, coupled with vote trading, i.e. buying votes by return votes, are a permanent fixtures in Los Angeles. Despite a four year prison term attached to each violation of Penal Code 86, you can rest assured that no L.A. City councilmember will ever be held accountable for violating Penal Code 86.