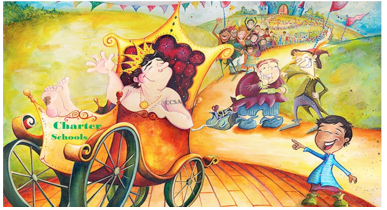 CHARTER WARS-Oh, edu-friends! Sometimes I can hardly keep a straight face at the forces trying to destroy public education. So, this time, I didn't even try. I hope you'll laugh, too.

I wish you could have been in LA LA Land with me last weekend! I made a video for you in case you missed the charter rally in the valley!

Now that headlines from across the nation, of the NAACP, Black Lives Matter, the Network for Public Education, and the ACLU have all made clear—and John Oliver made hilarious—that the charter emperor has no clothes, the California charter lobby took its carnival to its favorite corporate reform playground, Los Angeles. Pacoima to be exact. The last bastion of that little inconvenience of democracy, the largest school district in the country that still holds school board elections, LAUSD.

Edu-friends, I thought I had stumbled into a Trump rally. It really made me feel like these folks are our only chance at making education great again.

There were t-shirts with catchy phrases like “Fierce Learner”. Although I don’t know who let the guy slip in with an off-message t-shirt that read, “Public education is not for sale.” Ha!

There were t-shirts with metaphors like Phoenix! I could almost smell the smoke rising from the ashes. Although, let’s face it, that might have been the fresh aroma of bull****. Some hoped you’d forget they were any metaphor at all. Could the M.I.T. t-shirts actually, officially, almost be connected to the Massachusetts Institute of Technology? Oh, who cares? Details, details!

The point is, these kids have a great shot at getting into a school like that because they received extra credit for attending this rally! Several of them told me so.

There were other ways to tell this was no ordinary rally. It was literally on—wait for it—AstroTurf! That’s right, edu-friends. Mere grass isn’t good enough for these disrupters!

Just listen to this charter school principal shriek -- I mean lead -- the crowd.

“You have MORE accountability for MORE student learning! Can we do it? YES WE CAN! YES WE CAN! SI, SE PUEDES [sic],” she cheered.

Only 5% of California’s students attend charters, but this rally looked like the whole world had descended to celebrate charters! They boasted 3000 attendees. The cop I asked estimated 900 to 1000.

So how did these folks get here? Nothing is left to chance by the charter lobby. They had buses! But it was billed as a march, so a march it will be! Buses dropped folks off three blocks away so they could march into the rally!

And at the pilgrimage to Pacoima, the messianic theatrics did not disappoint.

The charter principal tells the story of “throwaway schools” and trashes the idea of integration.

And if you think anyone in LAUSD has the solution, you just don’t know how to let private enterprise capitalize on a good old fashioned crisis. I couldn’t find anyone in LAUSD there to set folks straight.

Chan ends her dramatic oratory with the 1993 miracle of miracles, the charter school law. That’s the law that lets some students into a charter if they win the lottery.

By the way, what rally could be complete without a drawing of its own? Just fill out the address card and give it to CCSA Families. Gotta capture your personal data somehow.

And it’s going to take a lottery—or maybe that principal’s miracle of miracles—for our public school system to survive charter schools sucking them dry.

What are our district leaders doing about this? What of LAUSD Board member Monica Ratliff, a headliner at the charter rally?

“I believe that parents should have the right to choose the school that they think is best for their children: Charter schools, magnet schools, pilot schools, private schools, traditional public schools…” Ratliff said.

And if you think a debate about opposing views was a good idea, think again.

“Rhetoric that turns discussions about education into an ‘us against them’ narrative is never, ever helpful,” Ratliff finished.

A narrative. So it seems that it’s all about a story. Is the story about re-segregation of schools? Or discriminatory enrollment practices? Or the bilking of millions of public dollars into private hands?

Edu-friend, that rhetoric is never, ever helpful! Especially with a new campaign beyond LAUSD where the charter debate is just icky. In fact, maybe she’s right. Maybe the real problem is those of us who talk about the problem.

But hey, politician’s speeches are nobody’s favorite part of a rally. And at this rally, EVERYBODY loves charters! In fact, they’ll pledge their allegiance to them, and that’s exactly what they did before boarding the buses to return home.

(Karen Wolfe is a public school parent, the Executive Director of PS Connect and an occasional contributor to CityWatch.) Prepped for CityWatch by Linda Abrams.