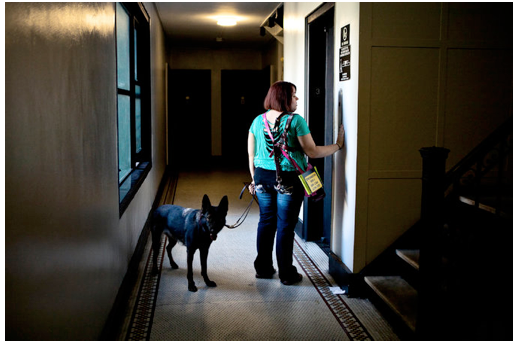 ANIMAL WATCH-None of the following is intended as legal advice. Information contained herein is strictly for informational purposes. If you are a landlord in Los Angeles and have specific questions or situations regarding Service/Emotional Support Animals, talk with an attorney or rental-property owners’ association, such as the Apartment Association of Greater Los Angeles (AAGLA) or Apartment Owners' Association (AOA). Both tenants and landlords can find information at HCID.

On January 26, 2016, the City Council approved a motion from the Personnel and Animal Welfare Committee (Paul Koretz, David Ryu, Marqueece Harris-Dawson) relevant to “programs and regulations that could facilitate the expansion of animal adoptions by tenants in residential rental properties.” This is part of the Koretz/GM Brenda Barnette’s “no kill” plan.

The LAist proclaimed (directly under a photo of a not-so-friendly-looking Pit Bull,) “L.A. City Council Moves To Make More Landlords Accept Pets.” It then gushed, “The motion (CF 15-0843) dictates that the city will begin soliciting input from landlords and other stakeholders on methods to expand the number of people living in rental properties adopting animals.”

But not all comments were so jubilant. Ryna Indica wrote, “No Kill is not humane…Pet owners are notoriously irresponsible and terrible at curbing their animals’ behavior. Barking, peeing everywhere. Why should a landlord (or other tenants furthermore) have to deal with that?...Who says more people would adopt? I'm so over these people making laws in a vacuum.”

The original motion by Koretz/O’Farrell in November 2015, instructed LA Animal Services and the Housing Department, “…to review the applicable laws of other cities in regard to using them as a basis for developing regulations for the city of Los Angeles.”

But after letters and public testimony in opposition, the action element was watered down to the DAS and HCID “soliciting input from stakeholders in the LA rental-housing market on approaches to expand animal adoptions by tenants in residential properties.”

This sounds innocuous; but because of the source, we know there is a trick in it somewhere. And in the introduction to the Council, the red-flag word “regulations” reappeared.

A few other key phrases are specifically vague. Twice the motion has indicated the animals are to be “adopted.”  It doesn’t say from what source(s). But we can presume this absolutely excludes pets purchased from breeders, over the Internet, or from pet shops just outside the city limits (all of which are reaping the benefits of the “puppy mill” kitten/puppy ban in LA.)

How do you conduct such a study? Does Los Angeles know how many transient renters have adopted animals and whether they keep those pets? Are there other jurisdictions that have an accurate count of how many of the pets in rentals are adopted?

Are they naïve enough to believe that other jurisdictions have programs and regulations that specifically mandate only adopted animals in rentals?

Next, the DAS and HCID are instructed to consider programs that “better inform tenants of their rights in regard to animal ownership.”

Not surprisingly, “Concerns, in regard to both financial issues and physical property that landlords and other tenants may have,” are the last of the issues to be studied.

This Council action culminates, after 180 days, in considering if any of these programs may be suitable “for developing approaches applicable in the City of Los Angeles.”

In Koretz/O’Farrell-speak, that means, “Are there any laws/regulations we can use to force landlords to accept animals?”

Here’s their rationale, “With the City striving to achieve "no kill" status relative to adoptable animals, reaching the goal will require encouraging and, when possible, facilitating adoptions in rental units.”

Why is it the social obligation of landlords and renters to assure that shelters appear to be “no kill?” We pay taxes for City officials to do that.

But to this end, LA Animal Services Commission Vice-President Larry Gross, Executive Director of the Coalition for Economic Survival who spews venomous comments regarding landlords on a historical basis, began in November conducting what he calls “Pets in Rental Housing” workshops, involving HCID, LA Animal Services and a tenants’ rights group.

These are held on City property--some in City shelters--and provide Mr. Gross, also a tenants' rights advocate, with e-mail addresses of renters (with problems) and landlords (with problem tenants who have pets.)

The wording of the flyers distributed by Gross at the Commission meetings states, “Learn about your rights as Tenants who want pets and be informed of your rights and responsibilities as Landlords.”

I personally attended one “workshop.” The assumption can be easily made that the detailed and specific answers to solicited questions from the audience of renters and landlords is legal advice.  Nowhere on the material or in his introduction and control of the meeting does Mr. Gross indicate otherwise or provide a disclaimer.

At the November 18 workshop (link below) Gross introduced himself only as the Vice President of the LA Animal Services Commission and informed the audience that in order for LA to reach “no kill” renters must have more pets.

A representative of HCID quickly reviewed a few items about the Rent Stabilization Ordinance (RSO) and pets in rent-controlled buildings--advising landlords of situations in which they cannot evict a tenant because of a pet. Watch the video:

A staff member of the Housing Rights Center showed a Power Point about their work and explained how tenants can have Emotional Support Animals, even if there is a “no pets” policy.

Finally, Mark Salazar, Deputy Director of Field Operations, LA Animal Services, showcased DAS and read from a Power Point how you can have an ESA animal. It does not have to be a cat or dog, he said, and “…does not need to be individually trained or certified to perform a service.”

“The emotional and/or physical benefits from the animal living in the home are what qualify the animals,” he read.

“These are animals that work, assist and/or perform tasks and services for the benefit of a person with disability or provide emotional support that improves the symptoms of a disability."

“A letter from a medical doctor or therapist is all that is needed to classify the animal as an assistance or emotional needs animal,” Salazar advised.

“The animal is viewed as a "reasonable accommodation" under the Fair Housing Amendments Act of 1988 (FHA or FHAct) to those housing communities that have a "no pets" rule… just as a wheelchair provides a person with a physical limitation the equal opportunity to use and enjoy a dwelling, an emotional support animal provides a person with a mental or psychiatric disability the same opportunity to live independently.

I asked an attorney for a large governmental agency about the pro’s and con’s of having a pet declared an Emotional Support Animal. He responded:

“The benefit of having your dog as an Emotional Support Animal can be far outweighed by the burden of a mental/emotional disability. Those who choose to claim they have a mental/psychiatric disability in order to have a dog where no pets are allowed need to be aware of the far-reaching potential consequences of claiming such a disability. Security clearances and certain occupational licenses may be difficult or impossible to obtain. The right to possess a firearm, and certain employment may be adversely affected. Once a person is labeled with such mental challenges, it is difficult to overcome and reverse.”

He also cautioned that anyone suggesting or implying that a person could circumvent a “no pet” policy simply by claiming that the animal is an Emotional Support or Service Animal could be considered complicit in criminal fraud or suborning perjury.

He added, “If a person needs an Emotional Support Animal, that is the same as needing a prescription drug and should be decided by the medical professional, not by a patient, because of the potential consequences of the diagnosis on the future of the individual.”