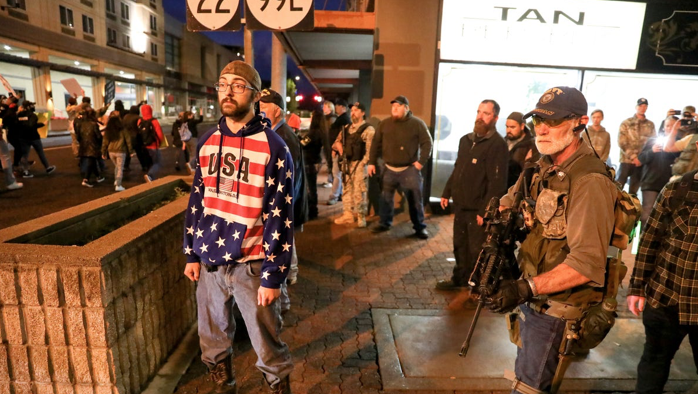 I get that, and understand the symbolism of packed heat. A gun says: We mean business. But that symbolism stops as soon as the trigger is pulled. What the armed protesters could wind up with is a bitter present-day civil war and the blood-stained illusion of change.

The country — and the world — have been in the midst of a social uprising for the past month and a half, ignited by the brutal police killing of George Floyd. The global protests against structural racism have been racially diverse and, for the most part (and except for the police) unarmed. But that’s shifting. Armed black protesters have begun making their presence known. So have armed white counterprotesters.

“We want change that’s really going to permanently help us. We don’t want [any] little change, we want some real change.” So said one of the organizers of the Not F**king Around Coalition, pointing out in an interview with Newsweek the ineffectiveness of civil rights marches since the 1960s. NFAC led a protest this past Fourth of July at Stone Mountain Park in Georgia. Several hundred mostly black, mostly armed men and women marched through the iconic Confederate “theme park” that features an enormous carving of Robert E. Lee, Stonewall Jackson and Jefferson Davis on the face of the mountain and was the site, back in 1915, of the rebirth of the Ku Klux Klan. The march was peaceful and there was no confrontation with white supremacists.

However, there was a confrontation — armed but, fortunately, nonviolent — at the base of another iconic Confederate landmark on July 4. This was in Richmond, the capital of Virginia, where a statue of Robert E. Lee has been under siege for a while now and protesters, demanding its removal, spent the weekend camping out at the statue’s graffiti-covered base.

As Hannah Allam pointed out at NPR, opponents to this cause were also present: “a gathering of heavily armed white men — some prepping for a second Civil War, some calling for a white ethnostate. Their speeches were essentially the overtly racist version of President Trump’s divisive lament at Mount Rushmore National Memorial Friday about lost heritage and fallen statues.”

However, she goes on to note that black gun clubs in the Richmond area “have come together to safeguard the protest site. They call themselves a deterrent — a defensive, not offensive, presence.” Their presence, she says, is controversial among the protesters, but grudgingly accepted.

And then, on the morning of July 4, the Bugaloo Boys — armed white males in Hawaiian shirts — showed up and stood in front of the capitol building. Other, more traditional-type white supremacists joined them, and just as the speeches were about to begin, another group joined them as well.

“Then, from around a corner,” Allam writes, “a group of armed Black protesters showed up, many of the same who patrol the Lee site. The gun-toting Black group stood across the street from the gun-toting white group.”

But instead of a simplistic, armed standoff — hatred spewing back and forth across the street — the leader of the Bugaloo Boys, a 19-year-old young man, crossed the street and introduced himself, evoking solidarity with them in support of the Second Amendment. The blacks crossed the street with him and the groups mingled together. And then, according to Allam, something truly surreal happened:

“At one point, a guy in a Hawaiian shirt and tactical gear wished everyone a happy Fourth of July and led the crowd — the white nationalists, the Boogaloo boys, the Black gun group — in a surreal rendition of ‘America The Beautiful.’ But the harmony was fleeting.” As soon as the white nationalists took the mic and began talking about “white genocide” . . . well, the unity, not surprisingly, fell apart.

All of which seems to indicate . . . I actually have no idea what, except that the stew of change the nation is in may be more complex than anyone realizes. Maybe there’s a force larger than hatred that is permeating multiple sides of this movement for change.

However, Allam brings up a cautionary moment, when an armed black protester asked the Bugaloo leader, Mike Dunn: “Who’s going to regulate if anything jumps off?”
“We just hope it doesn’t,” Dunn said.

In other words, things are volatile.
To which I add a bit of data from, of all places, Fox Business News: “More than 2.3 million guns were sold in June, a 145 percent increase from the prior year.” According to the news site, an estimated 2,387,524 guns were sold this past June, the fourth straight month in which gun sales have been up compared to last year. “Experts” attribute the sales spike to the unrest going on out there, the site unsurprisingly informs us.

Gun aficionados talk about their right to defend themselves, but mostly the purpose of openly carrying a gun is to give a public display of seriousness. The carrier, after all, holds the power of life and death in his or her hands. I get the symbolism and I get the absolute urgency of the current protests: We must acknowledge and atone for our racist history, defund the police and rethink the keeping of social order. We must do so now. This is a life-or-death situation.

But there’s a difference between carrying a gun and using it — indeed, all the difference in the world. As soon as we pull the trigger, we’ve dehumanized the enemy and gone to war. When we go to war, nobody wins.

(Robert Koehler ([email protected]), provided CityWAtch  by PeaceVoice, is a Chicago award-winning journalist and editor. He is the author of Courage Grows Strong at the Wound.)