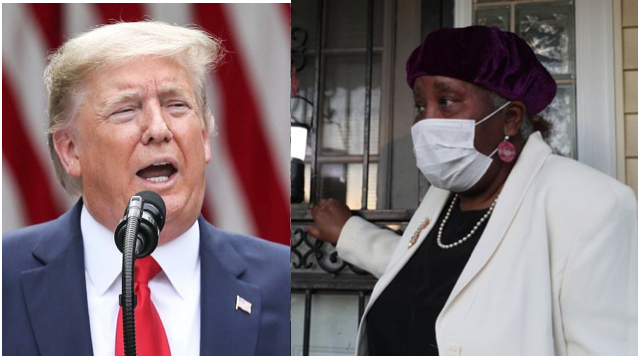 WORLD WATCH-The murder of George Floyd by a police officer in broad daylight came amid a high point in the continuing rampage of the coronavirus throughout the country, killing over 100,000 and infecting nearly two million while more than 45 million have lost their jobs.

The death of Floyd is no longer seen merely as an act of police brutality but the final crack in the dam, revealing the insidious socio-economic and healthcare malaise that continues to be inflicted disproportionately on the African American community.

A paper in the Annals of Epidemiology reports that while disproportionately black counties make up only 30 percent of the U.S. population, they are the location of 56 percent of all COVID-19 deaths. According to NPR’s analysis, Blacks are dying at higher rates relative to their total proportion of the population in 32 states plus Washington, DC.

Dr. Marcella Nunez-Smith, director of the Equity Research and Innovation Center at Yale School of Medicine, says, “We know that these racial ethnic disparities in COVID-19 are the result of pre-pandemic realities. It’s a legacy of structural discrimination that has limited access to health and wealth for people of color.”

What made matters worse is Trump’s overt racism, the muted leadership of the Republican Party, and its antipathy toward the Black community, all of which added fuel to the simmering fire of the centuries-long history of slavery, discrimination, and hopelessness. They know that their plight will not allay any time soon, not as long as Trump is the president and his party follows him like sheep that blindly graze in the meadows of discontent while the country is unraveling at the seams. They have betrayed the country by putting the party’s interests above that of the nation.

We are now reaping the harvest of the seeds of racism and discrimination; the devaluation of black life in job opportunities, in buying and lending, in wages, positions, and treatment. The whole socio-economic and cultural system is lopsided, as it lacks the fundamentals of justice and equality. The pandemic provided the wakeup call that pointed out the ugly tradition of subjugation of the Black community, which sadly did not stop with the end of slavery, but continued in the wanton indifference to their pain and agony, our uncanny negligence, and our failure to understand what they are really experiencing.

Time is not our ally; neither concerned white nor Black people should now be satisfied with words of sympathy toward the plight of African Americans. It is not merely changing the police culture and practices in the way they handle black versus white suspects. What is needed is a fundamental change from our innate desire to apply slavery to Black people as deserving nothing more than bare necessities.

Little has changed since the birth of the civil rights movement more than a half century ago. Although the majority of white Americans may not be white supremacists, they certainly hold onto their privileges in all walks of life as they view their relation with Black people and other people of color as a zero-sum game, as if a Black man’s gain invariably chips away from a white man’s privileges. The insidious, learned biases pitting white against black Americans directly leads to the treating of Black Americans as second-class citizens and suppression (whether conscious or unconscious) by white Americans -- a necessary ingredient that satisfies their ego and elevates their self-worth.

The week-long demonstrations throughout the country suggest not only the obvious -- that black lives matter, that inequality is rampant and must be addressed, that racism is consuming America from within, that injustice affects the perpetrators just as much as the victims, that enough is enough. The demonstrations also reveal the deep sense of frustration with a president who fans the flame of racism, who sees the country as his own enterprise, who can do whatever serves his own interests. He is cruel, cunning, and careless about the pain and suffering of Black America; he cannot count on their political support and hence his complete rejection of their outcry.

As has been widely observed, there have been instances of looting and destruction of property; much of it by opportunistic individuals trying to take advantage of the situation, and also by bad-faith actors attempting to delegitimize the protests. These acts are succeeding in drawing the attention of the media away from the importance and relevance of the majority of demonstrations that have been peaceful.

This is exactly what Trump wants to see happening. He wants the country divided between us and them. He wants to blame the Democrats and the liberal-minded people for the mayhem, while cowering in fear in the White House basement. He is refusing to address the nation, knowing that regardless of what he says, nothing will hide his demagoguery and disdain for people of color.

I wish to see tens of millions of Americans demonstrate peacefully day in and day out and send a clear message to this corrupt Trump administration that they will not rest until a fundamental change occurs. They must demand that bipartisan legislation passes that will address discrimination against all people of color under any circumstances; in particular in affordable housing, healthcare, job opportunities, and equal pay, and in anti-bias training for police and national bans on the use of force.

I also wish to see the Republican leadership wake up and halt their blind subservience to a president who has lost his way and dangerously degraded America here at home and abroad. If nothing else, the pandemic has demonstrated his utter ineptitude and the huge disparity between white versus Black America, topped with his demonstrable racism in which he takes pleasure.

I am not naïve enough to assume that my wishes will come true. But it should serve as a warning to every Republican member of Congress that the murder of George Floyd and the horrifying injustice it confirmed is the poison they will have to swallow just before Election Day if they fail to act.

(Dr. Alon Ben-Meir is a professor of international relations at the Center for Global Affairs at NYU. He teaches courses on international negotiation and Middle Eastern studies.) Prepped for CityWatch by Linda Abrams.