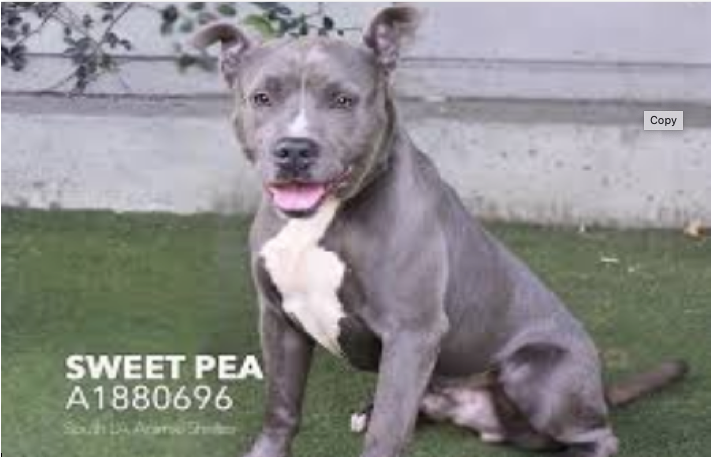 ANIMAL WATCH-Los Angeles Animal Services' ACO Hugh Briefman, a veteran animal control officer with almost 30 years of experience, responded to an urgent call from LA Fire Department for assistance at a dog attack inside a house at 10:00 p.m. on May 19, 2020, where a male Pit Bull had seriously injured two members of a family after they adopted him that day.

According to reports, Officer Briefman arrived and learned that firefighters had managed to get the two victims--a mother and teenage son--out of the Valley house through a bedroom window. They were rushed to the hospital by ambulance. But the Pit Bull, named "Sweet Pea" was still highly agitated and blocking the front door to the house from the inside.

The public doesn't hear from General Manager Brenda Barnette about the daily (and nightly) perilous and selfless acts of courage by Los Angeles Animal Services Officers--undoubtedly because many dogs like Sweet Pea with known prior aggression are regularly released to “rescuers,” fosters and adopters from the LA City shelters under Barnette's policies, with glowing profiles masking prior behavior which signals danger.

This is a "dirty little secret" of the highly lucrative, donation-driven “No Kill” movement that Mayor Eric Garcetti, Best Friends Animal Society and GM Brenda Barnette do not want you to know, and the mainstream media turns a blind eye rather than risk being politically incorrect.

It has taken a while to obtain official records from various agencies and speak with individuals to put together the story of what happened that night. But, this real-life event   must be read and shared by anyone considering adopting a shelter or "rescued" dog--especially a Bully breed--and especially in the city of Los Angeles, where this is just one of the latest in a long string of similar incidents.

(See: Dog with History of Aggression Attacks Child at Los Angeles Animal Services 'No Kill' Shelter and  LA Animal Services: Pit Bull with a Violent History Attacks Potential Adopter … What Did We Learn?)

Officer Briefman was advised that the mother had suffered severe puncture wounds to both arms as she tried to save her child, who was lying on his bed with their new pet. LAFD provided emergency ambulance transport to the Providence Tarzana Medical Center.

After a complete briefing by LAFD, ACO Briefman made entry into the bedroom through the window and discovered that the still-agitated 62-pound dog was blocking the only exit door from that room. He reportedly braced the door with his body and opened it just enough to get an ACD (animal-control device) through the opening and get the loop over the dog's head so he could control its movement.

He allowed the dog to calm down for a few minutes and then carefully came into the room and unlocked the front door so that the grey-and-white Pit Bull could be safely removed and placed in his truck.

The husband explained that they had just adopted the male dog, Sweet Pea, earlier that day from a San Fernando Valley rescue. An internet search shows the group claims it specializes in rehabilitating treatable dogs that have a troubled past but can be wonderful pets (the name of the organization is not provided for safety concerns).

The man said his son and the dog were lying on the bed when his wife heard sounds by Sweet Pea that alarmed her. The woman rushed into the room and started desperately trying to get the dog away from her son. Sweet Pea then attacked her, inflicting lacerations and puncture wounds to both her arms.

The LA Animal Services record states that Sweet Pea bit the 15-year-old in the face and the wound was "moderate." However, the 41-year-old mother's injuries were "severe."  Both injuries are described as "UPROVOKED."

"Sweet Pea" was an owner-surrender at the South Los Angeles shelter on July 31, 2019. He was estimated to be 8 years old and, according to the owner, had lived outside in a yard with a Chihuahua. The reason given for bringing him to the shelter was that the owner did not have the time or money to care for him. (Sweet Pea had a large mass on his side which was later removed surgically, and he was neutered by the shelter.)

A veterinary note on his initial examination also states he had a "swollen right front foot, possibly bite wound."

An April 8, 2020, an email from one of the LAAS "Life-Saving Coordinators" indicates that Sweet Pea was returned by a foster, who claimed to have tested positive for COVID-19 two days after taking him. Sweet Pea was quarantined at the shelter and again made available for adoption.

(We will never know if behavior concerns by the foster could have been involved in the quick return to the shelter. Fosters have told me they are reluctant to give any negative reports about an animal because of feeling responsible for the outcome.)

The "friends of the South LA shelter" described Sweet Pea in glowing terms (and may have been involved in renaming him.) It appears they spent little time with him, but here is one of the many comments posted on-line:

What a cutie! @friends.of.southla using @RepostRegramApp - Sweet Pea #A1880696 We still cannot believe Sweet Pea is STILL at the South LA Animal Shelter. This grey velvet hippo is 8 years old and both small and large dog friendly. He’s a staff and volunteer favorite at our friends from Harbor Animal Shelter where he was transferred from.

NOTES THAT WERE IGNORED OR DISREGARDED

On 8/27/19--shortly after impound, this entry was made to Sweet Pea's record by shelter staff:

"Dog is very aggressive shows teeth and WILL NOT go in cubby when time to clean kennel. Stays at front barking and showing his teeth."

And on 9/1/19 - "Do not enter the cage with hose or pupper scooper, dog will attack the cleaning utensils. Make sure to move the dog inside cubby when hosing. This dog gets aroused with the barking and noise of the other dogs. Only level 3 dog walkers. I observed this while handling dog for a better picture."

And, AFTER the attack:

On 5/20/20 a note by a Registered Veterinary Technician (RVT) reads:

"Lunged / tried to bite at RVT when cleaning the forehead.'

OBS - may bite / blood clots on forehead. Patient will not allow full examination."

IS "SWEET PEA" AGAIN UP FOR ADOPTION?

The records of LA Animal Services show that the "rescue" that adopted him to the family he attacked was advised of what had happened and "wanted Sweet Pea back." At first there was a note that this would have to be considered in light of what had occurred.

However, on 8/04/20 Sweet Pea's impound record shows he was "REDEEMED," which would seem to indicate he may again be "rehabbed" so he won't make the same mistake the next time some unsuspecting adopter is persuaded that training and love can change his genetic nature.

LOVE IS NOT ENOUGH - RESPONSIBILITY MATTERS!

With an increasingly high percentage of Pit Bulls in Los Angeles City shelters, serious attacks have risen proportionately. LAAS reported that attacks and bites inside the shelter to staff and the public increased 59%  -- from 59 in 2018 to 94 in 2019.

If the residents of Los Angeles cannot trust their highly paid Mayoral-appointed Animal Services' department head and LAAS upper-management to tell the public the WHOLE truth and protect their safety, it is time for the courts to consider personal and "product" liability in official acts.

When a department staff knows from the history of an animal that releasing it may be deliberately endangering lives and welfare, merely telling a potential adopters that an animal has a history of aggression that was probably caused by its unhappy childhood or uncaring former owner should not release the City's expert -- GM Brenda Barnette -- from individual responsibility and not just be settled quietly by the City Attorney so that these incidents go repeatedly unpublished and unknown.

An article in 2014 discusses the heroic act by an LAAS female ACO, and the deliberate lack of support for officers by Barnette and her upper- management team:

Here is an excerpt we cannot forget:

Brenda Barnette doesn't seem to think employee injuries are serious incidents. At the last LA Animal Services Commission Meeting on January 10, GM Barnette laughed as she described the injury to an LA Animal Services Officer attacked by an aggressive Pit Bull while responding to a call.

She laughed again as she announced a second injury when the officer was later attacked by a 160-pound dog and had to fight for his life. This is not the first time GM Barnette -- who has no animal control experience--chuckled about an employee being attacked in the shelter or field.  [The attack referenced was to Officer Hugh Briefman.]

Another example of faulty equipment and poor management was the attack on a night-shift female Animal Control Officer, who responded to a call about two attacking Pit Bulls in Eagle Rock.

The ACO captured one of the 90-lb. dogs (later identified as American Bulldogs) but the other bit her leg and wrist causing serious bleeding. There was no ACO back-up on night shift, her radio emergency button “went nowhere,” and no one answered the shelter phone. Luckily, a witness called 911.

And in 2016, L.A. Animal Services' Pit Bull with a Violent History Attacks Potential Adopter -- What Have We Learned?, told the horrific attack near downtown Los Angeles, when ". . .a Pit Bull surrendered as “Sodam” (renamed “Sammy”) with-a-violent-history of repeated-aggression, and who had just bitten an LAAS kennel worker in the abdomen, was released to NovaStar Rescue at the personal instruction of LA Animal Services GM Brenda Barnette.

On May 15, 2016, LA Fire Department and LAPD responded to an unkempt home near downtown LA at approximately 9 p.m., where a Pit Bull was attacking a woman who “was visiting dog to determine if she wants to adopt from the rescue who had been fostering the dog.” That dog was later identified by LA Animal Services as Impound #1608123, “Sammy.”

Sammy was alive but had been stabbed 19 times by a neighbor who heard the victim screaming.

GM Brenda Barnette has been steadily decreasing the number, training and impact of Animal Control Officers since she was hired in 2010 and this has been aided by Councilman Paul Koretz, Controller Ron Galperin and Mayor Eric Garcetti.

None of these elected officials  has conducted any investigation or audit of the careless disregard about the outrageous number of attacks and the failure by Barnette to provide resources for officers to perform this job safely and provide protection to the City's animal and human residents. (GM Barnette has a $48 million tax-funded budget and receives millions of dollars in donations and grants annually)

Animal Control Officers perform heroic and dangerous rescues daily--and it often involves risking their own lives to save another.

Officer Hugh Briefman has been attacked and sustained serious injuries five times but says he returns to duty because of his personal devotion to animals and protecting the residents of Los Angeles.

It is time to publicly acknowledge and applaud Officer Briefman for going through a window at night to remove a vicious dog that had injured a family that opened its heart and home to him.

It is time to thank all the ACO's and other members of field and shelter staffs who devote their lives and careers to upholding the law and the "rescue" of animals!