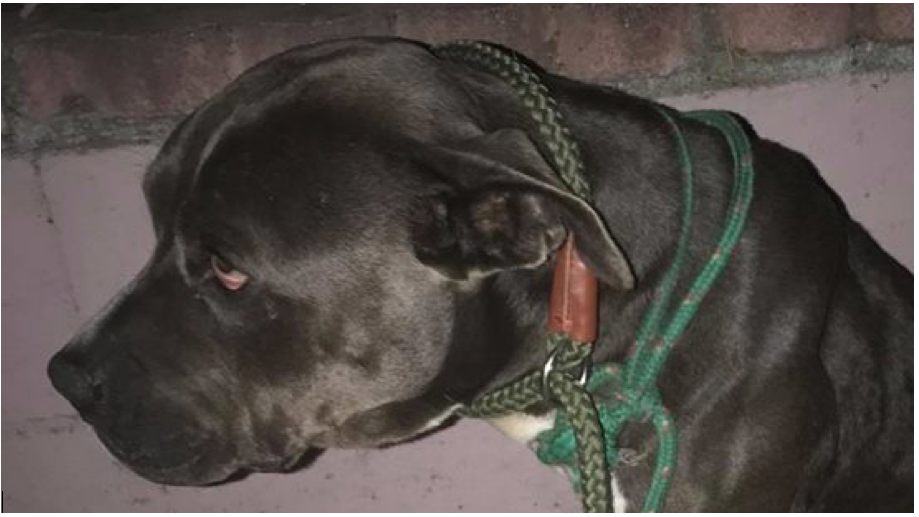 ANIMAL WATCH-Los Angeles Animal Services' GM Brenda Barnette did not comment on the August 8 KTLA News report of the death of a female Pit Bull dumped in front of a South Los Angeles home on Monday.

The dog, with a rope around her neck and her head held low, was diagnosed with "trauma in her vaginal area," after being taken for immediate emergency veterinary care by Dianty Marquez of Ghetto Rescue Foundation, an Anaheim Hills-based animal nonprofit which is described as "associated with police in the greater LA area."

Marquez said the dog, which she called, "Cargo," (photo above) was obviously suffering, but the veterinarian assured her they would try to make her comfortable. By morning, the gentle Black Pit Bull had succumbed to her injuries. Marquez told KTLA, "She passed because she had some type of blunt force trauma and it caused her aorta to rupture."

A woman who lived on the block said that neighbors, who wanted to remain anonymous, reported seeing two African American men dump the dog and leave. She said she called but couldn't get any response from city or county animal control. (This location is in the jurisdiction of Los Angeles City Department of Animal Services.)

The rescue group is calling for an investigation, and anyone with any information is urged to call the Los Angeles Police Department's Animal Cruelty Task Force at (213) 486-0450.

Marquez learned that the five-year-old Pit Bull was named "Valerie" and was given away at a "free" adoption event by Orange County Animal Services on July 23, but the phone number and address given at the time of adoption apparently were "not current."

The agency issued a statement which ended, "We take the safety of all animals in our care seriously and, as a result of the circumstances surrounding Valerie’s death, the individual who adopted Valerie is now ineligible for future adoptions at our shelter."

How do you make someone "ineligible" who apparently used a fake ID? How about not giving away "free" animals, which renders them worthless? These are the "precious lives" used to bring in donations and the meaningful beings for which taxpayers pay millions of dollars annually for shelters so they will not die painfully of injury or starvation in the streets. No political pressure for a shelter to be "No Kill" is worth this risk or sacrifice. The blame does not rest with the Director, but with those who push or pay for animals to be released without an investment by the adopter.

And, how likely is it that the same individual has adopted other animals from Los Angeles Animal Services also? How can a sexual predator who is into bestiality, and appears to be in this area, not take advantage of a "free" offer in LA -- which GM Brenda Barnette was proudly promoting at the recent Commission meeting?

This is the second media report of an adopted Pit Bull suffering an unnecessarily tragic and traumatic end to its life in slightly over two months.

The Dallas Express reported on May 29, 2018, that the body of a Pit Bull, named Titan, adopted from the Garland shelter (not confirmed if it was "free") the day before, was found shot in the head and dumped in an area that collects trash and dead bodies. The article said authorities were trying to determine the identity of the adopter.

The main reasons for shooting a Pit Bull in the head is that it either tried to (or did) bite a human, or it wouldn't fight. In either case, this dog should not have had to meet this horrible fate to fulfill the myth of "no kill" -- meaning that his death won't count on shelter statistics.

The excuse for "free" adoptions is shelter overcrowding, which is occurring all over the country because the remedies are to address the numbers, rather than enforce laws and stop the sources. The shelters must be supported by the public and local politicians. The wealthy humane organizations which are being allowed to dictate "No Kill" policies must accept and help municipal shelters provide safety and welfare to all animals in need, which will include humanely euthanizing some animals as necessary.

Although GM Brenda Barnette is currently claiming overcrowding due to receiving over 90 dogs from a hoarding situation, a glimpse at the LAAS website shows a fundamental problem with warehousing at the shelter itself:

--Twenty-five (25) of the dogs are identified as Pit Bull breeds.

At some point, the decision has to be made that humane euthanasia is kinder to these older animals that are already suffering from long-term confinement and isolation and will have a hard time finding a loving home that will be able and willing to pay for the expensive geriatric care that will soon (if not already) be needed. The shelter should not cruelly wait for them to get sick, so they die without impacting the "no kill" stats.

Also, Brenda is constantly hand-wringing at Commission meetings over cats and kittens flooding the shelter. The following personal observation may give her a clue to an important part of this continuing problem.

On August 7, I was at the West Valley shelter counter when a lovely 11-month-old black-and-white cat was surrendered with six nursing kittens by a woman who said she didn't have time for them. It turns out this cat was adopted by her from the shelter on 11/14/17, when she was a tiny kitten weighing 2.9 pounds, and NOT SPAYED.

The surgery was deferred because the kitten had a URI (upper-respiratory infection.)  Adopters are supposed to get the animal spayed or neutered (using a voucher) within 30-60 days, but, of course, they become too busy. And, reportedly, no one at LAAS is following up on these animals.

So, Brenda Barnette, who regularly blames "kitten season," could be causing much of her own problem!

This would change the LA Municipal Code so that your lost pet may never appear at the shelter because the City enters an agreement for the finder to keep it at their home for 30 days, after which time they apparently will have no obligation to return it. (See: Finders, Keepers': LA Doesn't Want Your Lost Dogs or Cats in City  ...

The LA Animal Services' Commission has already held two "public hearings" on potential pet-limit changes so that your neighbors can keep more dogs in their yards and empty the shelters.

I have, thus far, been the only member of the public attending specifically to testify and oppose any change. The few others have either been there for another item and decided to comment or have been volunteers attending because the meeting was held at the shelter.

This has not been announced by the major (or minor) media, and no notice or bulletin appears on the LA City site. It could not be found on Council websites or even on the home page for LA Animal Services. (More mismanagement or intentional?)

In fact, you need to make five clicks on various links to find at the bottom of the agenda for August 14, where Item 6G is described, as follows:

"Discussion on dog limits in the City of Los Angeles; reference Council File No. 17-1237-S1. (Public comment limited to one minute per speaker.)"

HERE ARE THE MEETINGS YOU DIDN'T HEAR ABOUT:

Minutes of that meeting appear in post (below) for July 10.

The current limit for dogs is three (3) adults and unlimited puppies under four months.

Councilman Paul Koretz already changed the cat limit to a total of five (5) cats per property in CF 13-1513 (pending lifting of an injunction on increased cats in LA.)

This means the CURRENT LEGAL NUMBER IN LOS ANGELES IS SIX (6) ADULT ANIMALS per property:  3 DOGS AND 3 CATS.

Brenda Barnette seems focused on emulating Santa Monica, a small, affluent city with an estimated population of 92,470, living in 8.41 square miles, carefully controlled because Animal Control is part of the police department, and so far, not needing pet limits.

By contrast, Los Angeles is 469 square miles with an estimated 4.9 million population with less than 60 officers for 24/7 service.

As a matter of fact, Barnette and Councilman Paul Koretz would like you to have a quasi-animal shelter right across the street from where you live, as indicated by their support of placing "adult-animal pet shops" adjacent to residential zoning.

Los Angeles does not want to end up with a report like this, 230 Pit Bull Attacks Reported In Cook County During Past 8 Months.

Here is some informative background material:

Pet limits are like speed limits. They are in place to assure safety and guard against abuse and dangerous behavior. Traffic officers do not always demand compliance with the specified speed limit and there are times when exceeding the limit is allowed because it does not constitute a public safety hazard and you are a conscientious driver. However, when there is a need to assure conditions are safe or to question erratic behavior, the speed limit provides a tool to inspect the car and observe the driver more closely.

Pet limits are in place to protect against abuse or neglect of the animals and the creation of dangerous situations (dog fighting, greater potential for attacks by escaped animals, threats or injury to pets and humans in the community.) The current dog limit curtails excessive barking and noise -- which is contagious and increases with numbers -- and allows control of public-health hazards (many canine diseases are airborne, and some are zoonotic -- meaning they can be contracted by humans also.)

The current LA City limit allows an officer to inspect the premises where three dogs and three cats reside, if there is a complaint. The most widely applied limits across the country are the current LA limits of no more than three dogs (to avoid development of a potentially dangerous pack mentality) and/or three cats.

The three-dog limit also allows better licensing enforcement, which is mandatory under State law as rabies protection. Increasing it merely adds to the possibility of adding abandoned or relinquished animals and more shelter overcrowding.

FOR A FLYER ON MAINTAINING CURRENT DOG/CAT LIMITS and the hazards of an increase and the potential negative impact on property values, e-mail: animalissu@aol.com.

YOU CAN ALSO VIEW A VIDEO ON THE REALITIES, RISKS AND SACRIFICES OF "NO KILL" IN CALIFORNIA SHELTERS HERE.