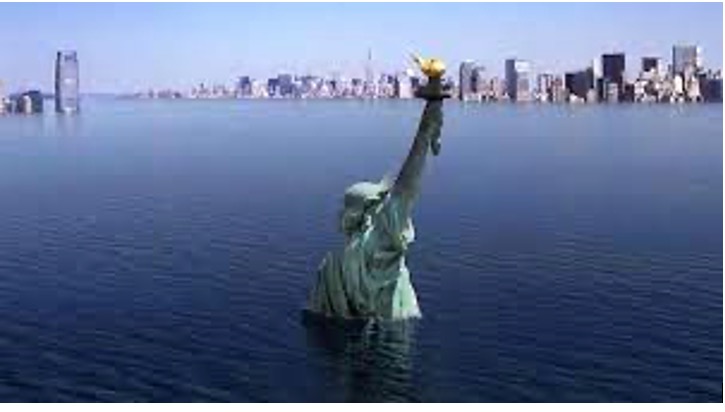 CLIMATE WATCH - It’s entirely possible that doomsayers of the world, though widely ridiculed, could be on target about the prospects for global societal collapse.

But, of course, when? According to a recent Noam Chomsky interview, it’s an ongoing grind that will end with a thud.

The onset of societal collapse is not hidden. Rather, similar to animals in the wild, people sense when something’s out of the ordinary, amiss, trouble brewing, on the alert. There’s tension in the air, tempers flare, strangers lash out, and society turns against establishment protocols; it’s the antithesis of The Adventures of Ozzie & Harriet (1952-1966) and Father Knows Best (1954-1960). Instead, it’s Mad Max (1979) redux. It is today’s world, and people sense trouble, something’s not right.

As for confirmation of those haunting feelings that something’s not right, a recent UN report discusses prominent risks of “global collapse”: UN 2022 Global Assessment Report on Disaster Risk Reduction, aka: GAR2022 d/d May 2022, more on this later.

Accordingly, escalating synergies of (1) disasters (2) economic vulnerability and (3) ecosystem failures increasingly accumulate into a juggernaut of collapse, and finally, similar to an orderly line of tripped dominoes, it cascades without enough notice.

On the heels of the recent UN warning, Noam Chomsky also echoes the central premise of doomsayers: “The challenge ahead is beyond anything humans have ever faced. The fate of life on the planet is now at hand.” (Chomsky - Principal speaker for the American Solar Energy Society 51st annual conference, University of New Mexico, June 21, 2022).

Chomsky is an iconic fixture of the Left known for strength of character, brilliance, and omniscience. His opening statement at the conference: “We are at a unique moment in human history. Decisions that must be made right now will determine the course of future history if there is to be any human history, which is very much in doubt. There is a narrow window in which we must implement measures to avert cataclysmic destruction of the environment.”

Chomsky questions survivability of humanity with one key sentence, as follows: “If there is to be any human history, which is very much in doubt.” This statement didn’t come from George Carlin in one of his cynical monologs on American ethics or morals. It’s Noam Chomsky, the father knows best figure of academia.

Chomsky speaks the same sentiments as the doomsayers of the world and in concert with an unlikely but factual United Nations doomsayer analysis, which is much deeper, and scarier, than publicly realized, more on that to follow.

Are they onto something?

Chomsky: The facts are clear. There are two major issues in front of us. The immediate crisis is severe. The crisis is coming to a head in Washington D.C., capitol of the most powerful nation/state in world history.

The fate of the world hangs in the balance of what happens in Washington. It’s not a secret. Indeed, New York Times energy environment correspondent Coral Davenport described a long carefully executed campaign to destroy organized human life on Earth in a recent NYT article: Republican Drive to Tilt Courts Against Climate Action Reaches a Crucial Moment, NYT, June 19, 2022.

Chomsky admits the Times article may seem outrageous, but he feels it is completely accurate. As explained therein, the campaign has been carried out meticulously for years by the Energy System. It’s enormous in institutional breadth, including fossil fuel companies, banks and other financial institutions and a large part of the legal community. It also has an international base of support called NATO.

It’s not widely known but in the post cold war era NATO formally undertook an expanded mission based upon the following dictum by the Secretary General: “To guard pipelines that transport oil and gas that is directed for the West and more generally to protect sea routes used by tankers and other crucial infrastructure of the energy system.” (Source: NATO Secretary General Jaap de Hoop Scheffer, 2004-09, outlining NATO’s mission at NATO conference)

The Energy System campaign has a strong political base in the Republican Party, especially since 2009. The McCain platform (2008) included a climate program until the Koch brothers got involved. And refused to tolerate it, launching a huge juggernaut bribery intimidation and enormous lobbying campaign to stop it, and going so far as to create a fake citizens group in opposition. They were successful.

Regarding Washington today and Davenport’s column: The Supreme Court, which is reactionary, will consider measures that restrict the use of fossil fuels to limit the effects of environmental destruction. If they strike down EPA authority, it’ll become a precedent for others winding their way thru the legal system. (Addendum- Subsequent to Chomsky’s speech, the far-right Court hammered the EPA, clobbering prospects for a green future in favor of a very dark world order.)

According to Chomsky, for most of history Homo sapiens lived in harmony with nature, until Aug 6 1945 the day that taught two stark lessons: (1) Human capacity reached a level to destroy everything (2) Very few seemed to care. The upshot: “Now, we are at the point when the major institutions of organized society are intent on destroying organized human life on Earth and the millions of other species.” And, too few seem to care enough to stop it.

The famous Doomsday Clock (University of Chicago) was reset during the Trump administration at two minutes to midnight for the first time since 1953. Now at 100 seconds. It will be set again in January, and Chomsky believes a good case can be made to move the second hand even closer to midnight, which is the final hour when humanity self-destructs, either with a bang or suffocation.

In addition to the primary concerns surrounding the dictates of the Doomsday Clock of a growing threat of nuclear war and of failure to prevent lethal global heating, a new concern has been added: The deterioration of rational discourse.  ”Unless that gap can be closed, there’s no hope of closing the dread in time to save ourselves.”

Moreover, for Chomsky, there’s a deeper question. It is the famous Fermi Paradox… in brief: Where are they?

Enrico Fermi (1901-1954) was a distinguished astrophysicist (Nobel Prize in Physics, 1938) and he felt certain about the reality of a huge number of planets with conditions to sustain life to lead to higher intelligence, and that we were within reach of advanced communication.

But we cannot find a trace of them out there.

So, where are they?

According to Chomsky, one response that has been proposed and cannot be dismissed is that higher intelligence has actually developed numerous times throughout the eons but has always proven to be lethal.  Similar to today’s merry-go-round tinkering with fission and excessive levels of greenhouse gases, “they discovered the means for self-annihilation but did not develop the moral capacity to prevent it. Perhaps that is inherent with higher intelligence. We are now confronted with whether that principle holds for modern humans.”

The risk of global collapse, as dealt with in the UN Global Assessment Report or GAR2022 has received little or no media attention.

Yet, it is the first-ever UN flagship global report with findings that current global policies are “accelerating the collapse of human civilization.” The report does not suggest that collapse is a “done deal.” Rather, without radical change, it’s where the world is headed.

The collapse scenario suggested in GAR2022 is explained in much more detail in a separate contributing paper: Pandemics, Climate Extremes, Tipping Points and the Global Catastrophic Risk - How These Impact Global Target, published by the UN Office for Disaster Risk Reduction.

The contributing paper discusses the impact of crossing planetary boundaries outside of what’s referred to as a “safe operating space for human societies to develop within a stable earth system,” resulting in Global Catastrophic Risk or GCR events. GCR events are defined as those events that lead to more than 10 million fatalities or more than $10T in damages.

The UN papers do not specify whether any of several collapse scenarios has actually begun, but according to the report, the world is clearly “tending dangerously towards these collapse scenarios.” No precise timetables are given.

Are the UN Reports Watered Down?

Nafeez Ahmed, a British investigative journalist and a former Visiting Research Fellow at the Faculty of Science and Technology at Anglia Ruskin University (est. 1858) Global Sustainability Institute authored the referenced article in Democracy Press. The following commentary comes directly from his article:

But there are reasons to suspect that a collapse process has already started, even if it is still possible to rein in.

A senior advisor to the UN Office for Disaster Risk Reduction and contributor to the Global Assessment Report who spoke to Byline Times on condition of anonymity, claims that GAR2022 was watered-down before public release.

The source said that the world had “passed a point of no return” and “I don’t feel that this is being properly represented in UN or media as of now”.

“The GAR2022 is an eviscerated skeleton of what was included in earlier drafts.”

The UN GAR2022 is a landmark document. It is the first time that the United Nations has clearly underscored the impending risk of “total societal collapse” if the human system continues to cross the planetary boundaries critical to maintaining a safe operating space for the earth system.

Yet, despite this urgent warning, not only has it fallen on deaf ears, the UN itself appears to have diluted its own findings. Like the fictional film Don’t Look Up, we are more concerned with celebrity gossip and political scandals, seemingly unable – or unwilling – to confront the most important challenge that now faces us as a species.

Either way, these UN documents show that recognizing the risk of collapse is not about doom mongering, but about understanding risks so we can make better choices and avoid worst-case outcomes. As the report acknowledges, there is still much that can be done. But the time for action is not after 2030. It’s now.

Postscript: Effective Monday, July 4th, the Italian government put restrictions on water on cities and towns in the north. The Po River, a source for agriculture, is at a 70-yr low. Global warming is hammering the country as drought has started to affect south-central Italy as well. Meanwhile, in South America the city of Santiago is rationing water to a population of 6.8 million, as human-caused global warming knows no boundaries. China has reduced water usage from January to October 2022 for Guangzhou (15M pop.) and Shenzhen (12.5M pop.) because the East River is down 50% The US Bureau of Reclamation is rationing some of the seven southwestern states as Lake Mead approaches the Dead Pool, getting frighteningly close! Only recently the Bureau demanded cuts by all seven states w/i 60 days in what’s considered an emergency situation.

The world climate system is no longer normal.

What does it take to get governments of the world to unify a global plan to combat their own destruction? For decades leaders of the world have failed to take global warming seriously. What now?

Then again, as suggested by Professor Chomsky, we’ll find out if the Fermi Paradox holds true for modern humans, as it has, in theory, for advanced (higher intelligent) civilizations over eons. But, that’s lights out, so what’s to find out?