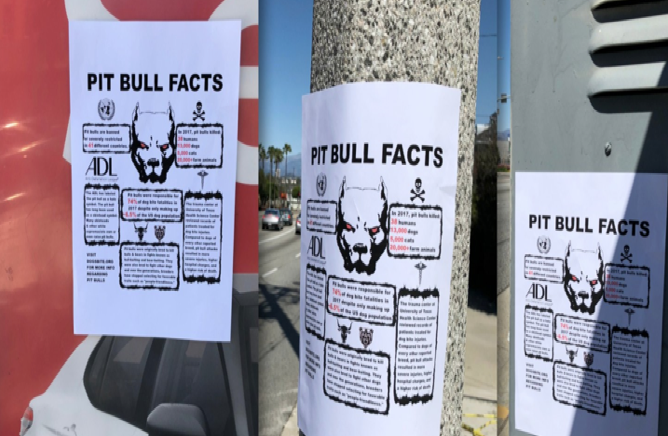 ANIMAL WATCH-#BanPitBulls flyers, with the heading, Pit Bull Facts, were posted widely this month in Los Angeles and other cities, including Boca Raton, Florida, and they seemed to catch activists by surprise.

The mystery person behind this campaign thus far has only a Twitter presence but has captured nationwide attention with tweets that are followed closely by both sides of the Pit Bull debate. He is known only as @WildGoose999.

His announcement, "The Anti-Pit Bull Street Team in Los Angeles was busy today with posting dozens of flyers raising awareness of the dangers of pit bulls," was reported in a Circa digital news post, which included the reporter's personal comment, "The latter claim is misleading. Pit bulls were originally bred to bite and hold bulls, not kill."

DOES LA HAVE A PIT BULL PROBLEM?

Circacontacted  WildGoose999, who  accepted responsibility for his differing observation on the blissful “angel-dog” characterization of Pit Bulls in Los Angeles, where bite statistics are not publicly posted or shared with residents by LA Animal Services, and there is no public concern expressed for victims of dog attacks by Mayor Eric Garcetti or the City Council.

If not for the LA Animal Services Commission agenda showing the Board has heard 29 appeals on Dangerous Dog rulings since January 2017 (these are the owners who take time off work and often hire a lawyer to try to keep a dog that has already attacked and harmed animals and/or humans); plus the report that LA was #2 in the U.S. in dog attacks on Postal Service carriers -- down from #1 in 2016 -- there would be no notice that mauling and deaths of pets and attacks on innocent people are continually taking place in the City of Angels. And, the according to the owners of the attacking dogs, the majority are Pit Bulls.

City Watchreported on the rescued Pit Bull with a violent history released personally by GM Barnette in 2016, which was attacking a potential adopter in a downtown home so savagely that a neighbor stabbed it 19 times. And, there was the brutal attack on shelter care technician, Priscilla Romero, in 2017 at the North Central shelter by an impounded Pit Bull. Co-workers saved her life. Also, last year, 75-year-old Valentin Herrera in Lincoln Heights died from a fall and fatal injury while trying to stop two pit bulls from killing his tiny Pomeranian.

Los Angeles and other major cities across the country will be hearing more from #BanPitBulls, according to @WildGoose999, who says this is a conversation that's time has come and it will be brought to the public for participation, not decided behind closed doors of political offices.

He expressed his aversion to protesters and activists who use the same people and the same mantra to influence and coerce decisions by political pressure, rather than on the merit of the issues and the effects on public safety. Since the facts about the number of attacks by Pit Bulls is obvious and irrefutable from medical reports, he says it is time to uncover the real motivations behind the "BSL" movement that is being forced on large and small cities and now being imposed by some states. The will of the people is not a consideration, and in these instances local government is losing its right to protect its residents.

He explained that he has not been a victim of an attack and really has not had any negative contact with a Pit Bull. His only personal memory is his father bringing home a Pit Bull when he was four or five years old and learning about the strength and determination of the dog, which chewed through a closed door. His motivation is the suffering and irremediable damage to human lives and the loss of their pets by vicious mauling and killing by Pit Bulls, which has become an epidemic.

Wildgoose999 unnerved more Pit Bull activists on Friday, when a two-sided digital billboard with large red letters, saying, BAN PIT BULLS, over the faces of four Pit Bulls suddenly appeared in Holly, MI, and created a panic among advocates who had been involved in passage of a state “No BSL” law (no breed-specific legislation). That was an interesting accomplishment in Michigan, where Pit Bull attacks and stray, starving, abandoned Pits, many of which are allegedly discarded by dog fighters, have been a topic of reports for years.

After NBC25 News reported the billboard, Jim Freemon, linked to World Animal Awareness Society, and Terry Hodskins of the Michigan Pit Bull Education Project, were among the first to announce on Facebook that the owner of the billboard company had canceled the giant message, because he has “3 pit bulls in his family.”

Wildgoose999 told me this type of reaction can always be expected and it would not deter this message being brought over and over again, especially because of the growing positive reactions and support he is receiving.

SO, HOW IS LIFE FOR PIT BULLS IN MICHIGAN?

With the above well-funded organizations assuring there will be no political effort to decrease the number of Pit Bulls in Michigan, it would appear the dogs must be having a good time and all in good homes. But, here’s a quick look at some of the recent news reports on Pit Bulls in Michigan:

This demonstrates the glaring absence of major campaigns by the anti-BSL proponents for equally strong anti-dog fighting/anti-cruelty enforcement and mandatory spay/neuter to stop the proliferation of a breed that is this abused and inhumanely exploited.

With its record on dog fighting, could there be influences in Michigan--and elsewhere--behind the 'No BSL' effort to assure no legislation can be enacted to provide greater protections for Pit Bulls and interfere with the dog fighters "rights"?

A 'TSUNAMI’ OF PIT BULL ATTACKS

A Boston Herald editorial, "Unleash Efforts to Regulate Pit Bulls," on April 15, describes a Google search of pit bull attacks as yielding “a tsunami of results” and asks, “When are we going to stop pretending?”

The Herald lists maulings and deaths with a sadness that is palpable:

--A week ago, a woman in Roxbury lost control of her pit bull mix, which was mauling a woman, and police were forced to shoot it.

--The same week, in Hyannis, a 22-year-old man was injured by an attacking pit bull.

--In January, a 1-year-old girl in Falmouth sustained life-threatening injuries when the family pit bull attacked her, biting her in the face.

--In December, a 22-year-old PetSmart employee was mauled by a pit bull during a grooming. (The owner described the dog to NBC News as “sweet as can be.”)

--In November, a loose pit bull attack report resulted in police ordering residents of several neighborhoods to stay inside, while they located the dog and used a stun gun to capture it.

--In October two pit bulls killed a 7-year-old boy who wandered into a fenced area.

PETS AND OTHER ANIMAL VICTIMS

'A TRAGIC DECEPTION HAS BEEN PERPETRATED'

Boston is not the only city concerned about the vulnerability of humans and pets to Pit Bull attacks. Two columnists for the Dallas Observer have weighed in from different perspectives with reason, compassion and common sense:

Three years ago, on April 22, 2015, following the gruesome fatal mutilation of a 2-month-old baby in Dallas, Steve Blow wrote a compelling column, “Propaganda-Hides-Danger-of-Pit-Bull-Attacks."He described how the infant’s family expressed complete shock, and the grandmother said the dog had been in the family with other children for eight years “without problems.”

He interviewed Colleen Lynn, a Pit Bull-attack victim herself, who now heads Dogsbite.org, and publishes statistics from dog-bite reports nationwide. She was not surprised by the family’s reaction. “It’s what they always say. They’re always shocked,” she told Steve Blow.

“Yes, all dogs bite,” she stated, but “most dogs bite and release, whereas, Pit Bulls bite and hold, rip and tear.” She compared the severity as the difference between a firecracker and a hand grenade.

Lynn also discussed what she called, “the bottom-line propaganda…it's all in how you raise them.” Which she assesses as "just not honest." Alluding to the lineage and historical purpose of Pit Bulls, which began with bull-baiting and later dog fighting, she explains that, "For centuries, these dogs were bred to attack and to kill."

Lynn told the Observer, “A tragic deception has been perpetrated on the American public.”

Now, another veteran Dallas Observer columnist, Jim Schutze, is addressing the same scenario. In a comprehensive inquiry this week, he asked, "If Pit Bulls Are Not to Blame, Then We Are. So What Do We Do About That?"

He begins by describing the most recent Pit Bull attacks in Dallas, "Another story this week of a Dallas resident viciously mauled by pit bull dogs."

Which reminds him of the others —

--A 35-year-old woman, was attacked early Sunday morning by four dogs but saved by good Samaritans."

--Antoinette Brown, mortally wounded by dogs in South Dallas in 2016 while screaming for help;

--The dog called Lamb of God, used by a homeless man as a begging prop, that severely bit a child in the face last year;

--A pit bull that mauled a child last year at a pet adoption event sponsored by an anti-euthanasia group Dallas Pets Alive (which subsequently took the side of the dog against the toddler)."

"It’s really hard to see something like this, especially because of what we’ve been through so many times before in Dallas...We all know one thing," Schutze concludes, "Something must be done, something effective. This can’t just go on."

Wildgoose999 told me said he didn’t start out to establish a”'movement.” He saw the suffering of children and animals and also the pathos of the lives of an overwhelming percentage of Pit Bulls, which are not really protected by their own protagonists. Shelter statistics estimate that at least 70% of impounded dogs at any time are Pit Bulls. Pit Bulls are frequently reported in massive abuse, hoarding and abandonment cases. The types of people that choose them often do so as a show of power, rather than as a pet, and that mental proclivity results in abuse of the dog.

Plus, the reports of attacks by Pit Bulls and the immensity of the suffering need to stop.

WildGoose says #BanPitBulls is an effort to bring to light the fact that certain large, well-funded ostensibly “humane” organizations are behind forcing people in cities to live under pre-emptive “No BSL” laws. This takes away the right of the local jurisdictions (or any entity or business within them) to set their own public safety laws in regard to dogs.

Attorney Kenneth Phillips, Los Angeles' most prominent lawyer specializing in dog bites/attacks, posted a 28-second video on Facebook on January 19, with the printed introduction, SUPER BOWL COMMERCIAL THAT SAYS: 'DO NOT ADOPT A PIT BULL.  It had over eight million views and 100,000 shares by that weekend. He soon posted a video on YouTube:  "The Number 1 Killer of Other People’s Pets.”

I asked Attorney Phillips for his opinion on #BanPitBulls. He responded, "I read many posts on the Twitter page for WildGoose999. Very interesting. People have to stop saying "ban pit bulls" silently, in their heads, and begin saying it out loud. Until there is a scientific study that tells us which lines of pit bull are docile and which are time bombs, it is best to stop breeding them."