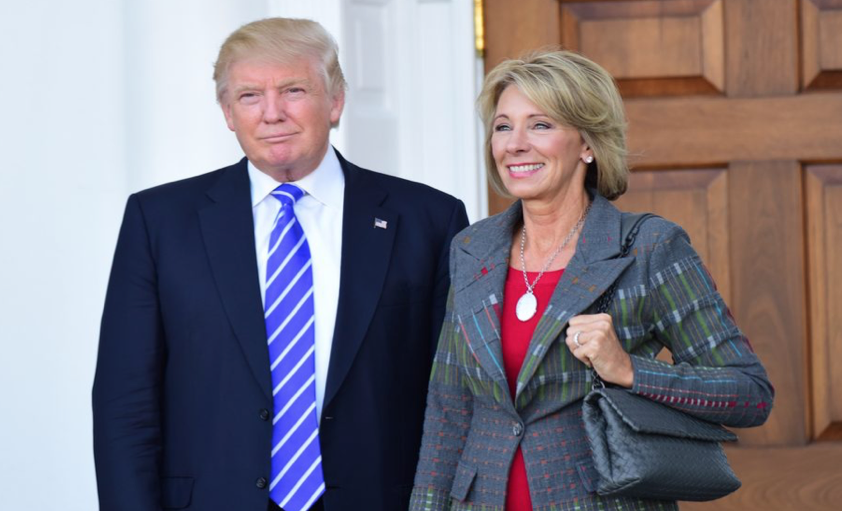 OTHER WORDS-Education Secretary Betsy DeVos is back in the news on a topic close to my heart: student loans.

It’s close to my heart because I’m six years into a PhD program and six figures in debt right now. While my life has been immeasurably enriched by my education, I’m not taking on this amount of debt simply because I love learning.

Like anyone, I’m doing it because I need a job.

My student loans were a calculation of risk vs. reward: I took on this debt because I believed doing so would result in eventually finding a secure, well-paying job that would allow me to pay it back and then some. Just the learning, or even the degree alone, will not be worth it unless my degree leads me to a job.

That’s the calculation students make when they take out student loans. Education is a ticket to many salaried, middle class jobs, yet higher education is financially out of reach for many without loans.

Sociologist Sara Goldrick-Rab has documented many ways in which our existing financial aid system does not adequately serve the needs of low-income students — because it was created based on assumptions true of wealthier students only.

Some students take out loans but don’t finish their degree — and they are left in debt with nothing to show for it. These are not lazy students. They are often working one or more jobs, sometimes raising children, and trying to go to college while living in poverty. Attempting to attend college leaves them worse off than if they had not tried at all.

The latest news concerns students who took out loans to attend now-defunct for-profit colleges, and they too are in debt with nothing to show for it.

Even if the students attended classes, did their homework, and got good grades, the credits they earned at those colleges are worthless to employers. The schools defrauded the students, promising that the credits and degrees they would award had a value they did not.

Under the Obama administration, the government was going to give these students full loan forgiveness, based on a provision in the law that allows it in such cases.

The current debacle is part of a larger problem. The larger problem is a job market in which wages haven’t kept pace with inflation or productivity and many jobs are low wage, short term, unstable, or lacking in benefits.

Loans are the Band-Aid we use to make college educations more accessible without addressing structural problems in the job market or the cost of college.

Unfortunately, it’s the most vulnerable students who pay the price when this system doesn’t work. And it’s even worse when the government sides with the for-profit frauds who bilked them.

Since the students were defrauded, and there’s a legal provision to forgive their debt, the government should do so. It may not fix the larger problem, but at least it provides justice to victims who deserve it.

(OtherWords columnist Jill Richardson is pursuing a PhD in sociology at the University of Wisconsin-Madison. Distributed by OtherWords.org.) [[[   https://otherwords.org/the-education-department-is-ripping-off-defrauded-students/ ]]]  Prepped for CityWatch by Linda Abrams.