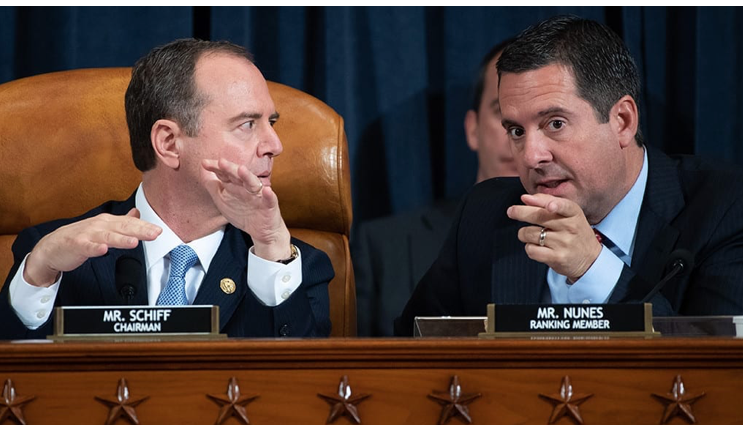 BCK FILE-The prototypical TV or film western climaxes in a fight between two cowboys on a dusty street, a classic struggle of good vs. evil.

Although there are no six-gallon hats, horses, or gun-slinging, the Impeachment Hearings and events leading up to the hearings have highlighted two congressional representatives in what has been a California Showdown, Rep. Adam Schiff (D-CA 28th District) and Rep. Devin Nunes (R-CA 22nd District.)

Rep. Adam Schiff, who has been the target of continuous name-calling by President Trump, chairs the House Intelligence Committee and has been a central figure in the Impeachment Hearings. His opening statement can be read here.

““If the president can simply refuse all oversight, particularly in the context of an impeachment proceeding, the balance of power between our two branches of government will be irrevocably altered.” -- Rep. Adam Schiff

Rep. Devin Nunes, who served as the Chair of the House Intelligence Committee from 2015 to 2019, as well as on the Trump transition team, has been one of the president’s most strident defenders through the process. Nunes, a ranking Republican on the House Intelligence Committee, appears to be less a bystander than a participant in the impeachment allegations and will be the subject of his own investigation.

Two key figures in the Trump Ukraine scandal are Lev Parnas and Igor Fruman, former associates who assisted Rudy Guiliani in seeking information to compromise Vice President Joe Biden’s presidential run, as well as to undermine the Special Counsel’s investigation. In addition, the two men were at the center of the Trump push to remove US Ambassador to Ukraine, Marie Yovanovitch, who was seen as lacking in loyalty to Trump and his agenda. In addition, the two men were supposed to back allegations that former Ukranian officials were behind the scheme to reveal damaging information about Paul Manafort, Trump’s campaign chair, which was at the heart of the Special Counsel investigation.

Parnas and Fruman were arrested at Dulles International Airport on October 9, charged with planning to direct funds from a foreign government to U.S. politicians while trying to influence US-Ukraine relations.

On Saturday, in an exclusive CNN report, journalist Vicky Ward reported that Lev Parnas is willing to testify before the House Intelligence Committee that Rep. Nunes had met with a former Ukranian prosecutor to get information on Vice President Biden, which Nunes has denied. In fact, Nunes has threatened to file a lawsuit against media outlets, including CNN, for reporting the allegations.

However, allegations in an ethics complaint filed over abuse of office indicate that Nunes spent almost $57,000 on flights to Europe to investigate Biden, which confirms what Parnas has revealed. Parnas says he met with Nunes in Vienna sometime between November and December of last year to connect the representative with former Ukranian Prosecutor Victor Chokin. Reports filed with the Office of the Clerk for the House of Representatives show Nunes claimed expenses for a 4-day trip between November 30 and December 3 for Nunes and three staff members.

As of Sunday evening, numerous sources have reported to ABC News that Parnas has submitted audio, videos, and photos to House Democrats conducting the Impeachment Inquiry following a subpoena by Intelligence Committee Chair Adam Schiff. ABC has reported that some of the materials submitted include both President Trump and Giuliani.

On Saturday, Rep. Adam Smith (D-WA), the top Democrat on the House Armed Services Committee, said Nunes will likely face an ethics investigation related to the allegations by Parnas. The Democratic coalition to the House Ethics Committee raised conflict of interest issues and called for an investigation.

“Rep. Nunes allegedly met with foreign officials on an overseas congressional delegation using taxpayer funds which appears to be related to obtaining materials solely for the purpose of domestic politics.

Rep Nunes is currently engaged in overseeing an investigation which appears he is in fact witness, and which may examine his own activities meeting with foreign officials

This is a complaint against Rep. Nunes for abuse of his official office in violation of House Rule XXII.

“The Evidence is Overwhelming”

As the House Intelligence Committee wrapped up its public impeachment hearings last week, Schiff also told State of the Union that investigators are still willing to summon additional witnesses, although no more public hearings have been scheduled about the Trump Ukraine allegations.

“We don’t foreclose the possibility of more depositions, more hearings,” Schiff said. “We are in the process of getting more documents all the time. So that investigative work is being done.”