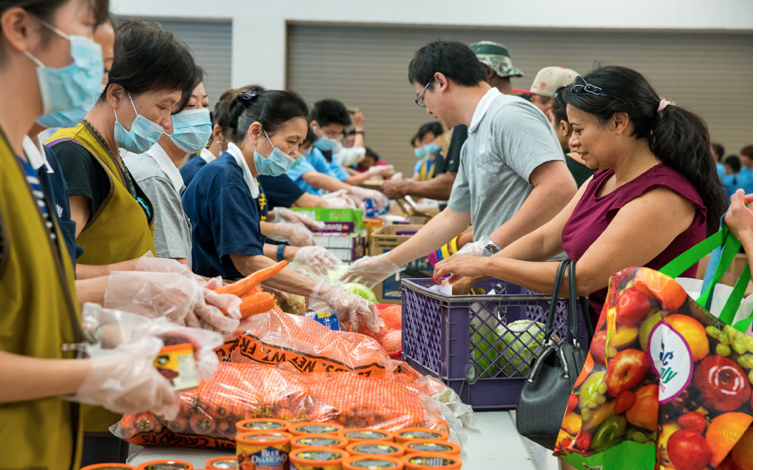 PLANNING WATCH-In the United States one of seven adults goes to bed hungry, and the plight of children is even worse; one in five do not get enough to eat! In Los Angeles, the Regional Food Bank reports that 2,000,000 Los Angeles County residents are food deprived.

This amounts to 20 percent of the population, and the Regional Food Bank also notes “Hunger affects all groups of people regardless of education level, employment status, or ethnicity.”

In response, in addition to an extensive network of local food banks, the Department of Agriculture (USDA) operates the SNAP program (Supplemental Nutrition Assistance Program), usually referred to as food stamps.  Each month, SNAP and other USDA food programs feed 40,000,000 people. These popular USDA programs hearken back to the depression-era New Deal, when President Franklin Roosevelt’s (FDR) acknowledged the extent of poverty in the United States through his famous 1936 inaugural speech: “I see one-third of a nation ill-housed, ill-clad, and ill-housed.” Eighty-three (83) years later, FDR’s words still ring true, despite decades of bipartisan pushback against New Deal policies and programs.

This response to widespread hunger in the United States sharply contrasts to those who still live in over-crowded and rent-gouged apartments, or sleep on couches, sidewalks, cars, and tents. This homeless population now totals 550,000 Americans, including 36,000 Angelenos. 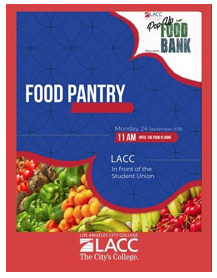 While food banks and the USDA’s food assistance programs have extensive public support, the same approach does not apply to the housing crisis. Unlike Franklin Roosevelt, most public officials treat these twin crises differently, with tacit public support, especially from those whose endorphins spike every time they blame a victim for homelessness on social media.

Although explanations for pressing social problems, like homelessness, that shield decision makers, no longer surprise me, I have yet to hear the same blame-the-victim explanations applied to the hunger crisis.

Is it just a matter of time until we hear the following?

This solution is obviously ridiculous since, per Leonard Cohen, everybody knows that unsold gourmet food at these expensive emporiums will never be marked down to the price point that the hungry can afford it. Nevertheless, this is the same argument that the California State legislature raised when it recently adopted Senate Bill 330 and continued Senate Bill 50.The latter housing legislation, authored by YIMBY California and sponsored by real estate industry loyalist State Senator Scott Wiener, is entirely based on supply-side economics. Its supporters actually believe that more luxury housing will miraculously trickle down to eliminate homeless.  Furthermore, this is the same hocus-pocus offered by LA’s City Hall and its Abundant Housing associates when they embrace local real estate scams, such as Transit Neighborhood Plans (TNPs). 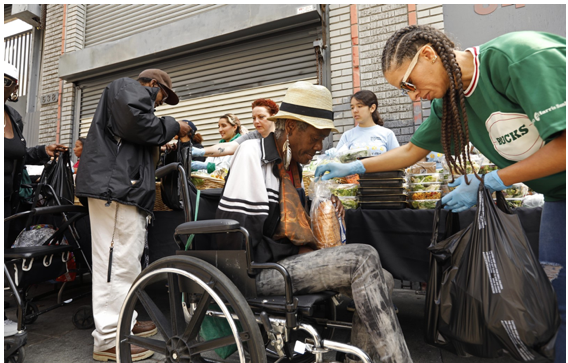 This wheelchair-bound woman did not get the memo that she likes to be hungry.

Why do these all too-common claims to justify homelessness and oppose individuals and groups helping the homeless gain traction, while the same exact arguments, when applied to the hungry, are dismissed as preposterous?

It not just that the homeless are more visible than the hungry. They are also an inevitable outcome of long-term cutbacks in government mental health and social service programs, as well as the elimination of affordable and low-income public housing programs. At the same time public officials have become dependent of campaign contributions from well-healed real estate donors.  As the real estate sector’s wealth has grown to 60 percent of all assets,  so has their political clout and willingness to use it to maintain their business model: real estate speculation in major cities to accumulate immense profits.

As suggested by Brian Hennigan in Jacobin Magazine, this business model creates homelessness faster than government agencies and non-profits can sweep it out of view. As a result, major real estate investors face a dilemma because nearby homeless encampments deter potential buyers and renters. To reduce homelessness, they could forego investments in highly profitable urban real estate projects, but this would cut into their bottom line. Or, they could generously fund quasi-public housing through employee and inclusionary housing programs, but this, too, would reduce their profits.

Their third option is to use the corporate media to stigmatize the homeless and local government to push them to other areas through police and Bureau of Sanitation sweeps. This approach hopes to placate the liberals with a few symbolic programs, like Measures JJJ and HHH in LA and win over the neo-liberals and conservatives with tall tales about trickle down housing. As for the Fox News crowd, they are served large portions of blame-the-victim baloney, which they quickly digest and spread through social media.

Can our local officials really square this circle? Can they simultaneously serve the needs of their real estate donors, placate the liberals, cut deals with the conservatives, and feed red meat to the drive-the-homeless-out-of-town crowd? The steady increase of homelessness, the emergence of homeless encampments throughout Los Angeles, the likelihood of a housing market collapse, and the preparation of detailed public housing programs by some Presidential candidates suggests no.

This circle cannot be squared much longer.