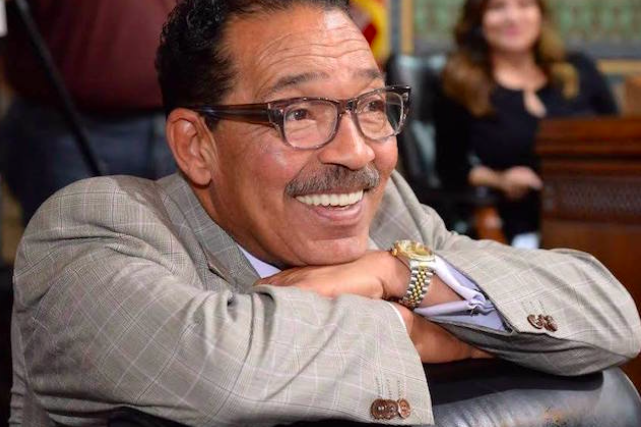 SOUTH OF THE 10---After his office had “no comment” to a proposed 577 unit housing, with zero set aside for low-income residents, L.A. City Council President Herb Wesson is proposing ‘anti-displacement zones’ to keep rent prices down around certain market rate developments. One in particular being the new Crenshaw/LAX rail line.

This newfound epiphany to not displace “lifelong community residents” could be seen as a campaign ploy in his bid to become the next LA County Supervisor for the 2nd District.

One of his opponents, former LA City Councilwoman Jan Perry, released survey results, earlier this month, that state 60% of voters are less likely to vote for Wesson due to the amount of corruption being investigated at City Hall.

The developer of the proposed 577 unit housing complex, in Wesson’s district, has a brother involved in a current federal investigation regarding bribery.

“We voted as a council for a development that would improve, not displace, the community,” Wesson said. “We have no need for a six-story development consisting of 577 luxury apartments that will be unaffordable to most of the neighborhood’s current residents.”

How an anti-displacement zone would work, and how long it would take to craft such a measure, is far from clear. Wesson spokesman Ed Johnson told the L.A. Times the proposal would “in all likelihood” cover the entire city, but that his boss first wants to consult his colleagues. Johnson said Wesson is still trying to determine what projects would trigger the creation of such zones.

The city already has an ordinance that limits rent hikes in apartment building constructed before October 1978. Gov. Gavin Newsom intends to sign a bill limiting rent hikes to 5% plus inflation starting Jan. 1.

Read the full article on LATimes.com.