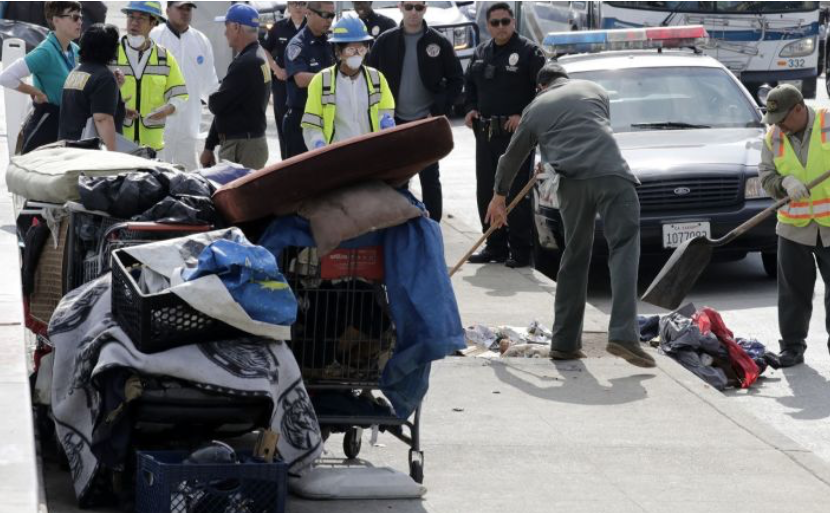 DEEGAN ON LA-”These are not poor homeless families, these are drug addicts, who attract the thieves who steal from us and make us feel insecure, who when they are high, yell and rant and rave into the night,” alleged an irate resident in the Beverly La Brea neighborhood a few days ago.

So began the heated rhetoric in a recent post on Nextdoor which calls itself “the world’s largest social network for the neighborhood.” It’s also a not-necessarily moderated, granular-level community newsfeed, so postings can vary in their pitch, tone, and content.

Neighbors in the La Brea Beverly neighborhood were engaged in a public “Nextdoor” back-and-forth of what to do about a homeless encampment pitched in the middle of their community on Sycamore Avenue at 2nd Street, right behind the wall to the parking lot for Petco and Ralph’s.

According to one vocal resident, the local encampment sounded like a drug shooting gallery, a nest for thieves who prey on the neighborhood. Others took a more measured approach, suggesting some documentation to assist the authorities who must be bombarded daily with pleas to clean up encampments.

“I probably have a different perspective than most,” countered a Beverly-La Brea neighbor in a Nextdoor response to the threat of the homeless encampment. “I keep urging the street’s residents to be more active and put up security cameras, but it turns out many of them think they ‘shouldn’t have to’ do anything and will not. I’ve spoken to the police and have been told that video could be enough for the police to act, since they can’t catch them in the act after being called.”

From there, a possible solution jumped from the practical to the exaggerated when the instigating neighbor suggested a rent strike to force the landlord to do something about the homeless encampment. That would require agreement by the building's tenants to take an action that could put them in jeopardy with that landlord. The same energy spent in organizing a rent strike could be used to help create a neighborhood block group, elect a block captain, and work in partnership with the LAPD Senior Lead Officer (SLO) assigned to the neighborhood. Concerned tenants could also go to the public safety committee of the Neighborhood Council. Other options include working with the homeowners’ association or tenants’ association to help voice their concerns.

What actually worked and was set in motion by the complaining neighbor and was already scheduled for action by the City before complaining went public, was to notify the Councilman’s deputy for the area as well as the LAPD SLO. On August 8, a city sanitation crew went to the encampment which, because they had been given notice, had already dispersed.

So, the City’s system worked. And complaining on Nextdoor was gratuitous and hysterical.

A councilmember’s spokesperson explained to CityWatch how the process to clean up a homeless encampment works, saying that “a lot of steps are involved to coordinate encampment cleanup:

While it’s possible the encampment could return, what’s indisputable is the effectiveness of the City system that produced the results that were asked for: cleaning up a single encampment consisting of a small handful of tents. Imagine how many times this cycle of complaint and clean-up happens across the LA every day.

There’s no question that, drug dens and thieves’ nests set aside, homeless encampments present a public health hazard to Los Angeles. The county’s health officer, Dr. Muntu Davis, notes the absence of bathrooms and sanitary facilities combined with built-up trash help create a rodent-friendly environment around homeless encampments. It’s a problem that must be prioritized. The City, through a new LA Sanitation Deployment Plan, is trying to address those health concerns, and that starts with “sanitation.”

What didn’t work so well, was the agitation caused on the community bulletin board which turned out to be unnecessary. All along, the angry neighbor knew from the councilmember’s office about the scheduled August 8 clean-up date, but categorically stated, “I don't have faith it will happen.”

The complainers were wrong: the clean-up occurred as announced and scheduled. In this case, silence and patience would have been golden. Waiting to see if the political promise was delivered (it was) before acting like the sky was falling would have been a better approach.