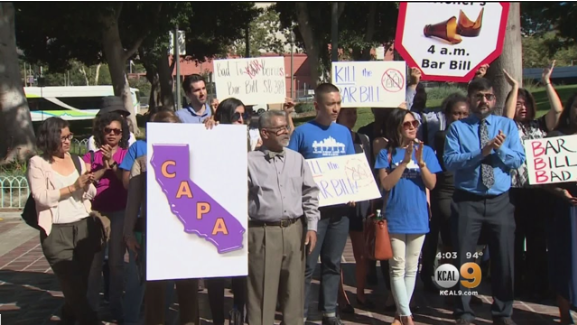 CALIFORNIA POLITICS-The date was Valentine’s Day, February 14, 2017, in Sacramento CA, when Senator Scott D. Wiener introduced SB 384, a bill amending the California Business and Professions Code to permit the Department of Alcoholic Beverage Control (ABC) to extend the required closing hours of operation for the sale of alcoholic beverages from 2 a.m. to 4 a.m. (so that “last call” at any bar, restaurant or other service establishment would be 4 a.m.).

How It All Began

The Bait and Switch

As of September 1, 2017, Last Call had been voted out of both Assembly Committees to the Assembly floor but Sex Offenders had been held in suspense (i.e., tabled) in the Assembly Appropriations Committee (the suspense file of the Appropriations Committee in either the Assembly or the Senate is generally a graveyard where bills go to die). And Sex Offenders died in 2017, at least in name. BUT the sex offenders’ registry was amended in that legislative session by way of Last Call, since Last Call became a sex offenders registry bill instead of a last call for alcohol bill. So how did that happen? As the San Francisco Gate put it:

“Law enforcement pushed for the bill, arguing that California’s registry is so large that officers and the public can’t determine who is at high risk for re-offending. The registry has 100,000 sex offenders — meaning 1 in 400 Californians is on it.

‘It is really hard to talk about doing anything that can be perceived as helping a sex offender,’ Wiener said. ‘But, the reality is the registry is so broken that it makes people less safe.’

Legislation to overhaul the registry has been recommended by law enforcement officials for years, but lawmakers were hesitant to vote for a bill that would label them soft-on-crime. Wiener’s first attempt on the bill this year failed too, but he brought the bill back this week through a maneuver known as gut-and-amend, where the contents of an active bill are dumped and replaced with those of a dead bill.”

How Last Call Became a Trojan Horse for Sex Offenders

Last Call was republished on September 8, 2017, to its final form (all redlining removed). The only trace remaining of the original bill and the process to “gut and amend” is found by running a “Compare Versions” of the bill as ultimately enacted with the 09/05/17 Amended Assembly version (3rd to the last version).

The Assembly Committee on Public Safety held a short hearing, without agenda, on September 11, 2017. This was not a huge hurdle, because as you may recall from an earlier paragraph, Sex Offenders had already been approved by this Committee. So, presto, with a sleight of hand and a little bit of fairy dust, Sex Offenders, a controversial bill that had died in the Assembly Appropriations Committee, had a second life through a bait and switch effort in which Last Call was gutted and amended to a completely different subject. Opposition melted away and the bill sailed through.

The final version of Sex Offenders now known as SB 384, a sex offender registry bill rather than a bill about last call for alcohol sales, got rammed through both houses in just eight days -- from September 7, 2017, when Assembly member Lowe moved to accept the amended language and the Assembly re-referred the bill to the Public Safety Committee to the passage by both houses of the Legislature on September 15, 2017.

Rather a long history lesson, but one worth understanding well.

Having succeeded with the gut and amend strategy in 2017, Senator Wiener can be expected to try the same thing again with his zoning deregulation bills.

Fast forward to the 2019 legislative session. There are persistent rumors that Senator Wiener plans to do another “gut and amend” to try to pass the substance of SB 50 under the name of one of the bills that has passed the Senate and is pending in the Assembly. SB 592 has been identified as a potential vehicle for a gut and amend. It has cleared the Senate and has been held at the Assembly desk since May 24, pending referral. Everyone should track and watch that.

Everyone should let their own Assembly member and all leadership know that we are watching, and that SB 50 cannot be permitted to return in a gut and amend switch as SB 592 or as any other bill.

SB 58 also is a candidate for Senator Wiener to "gut and amend," to be reborn as the “son of SB 50.”  SB 58 is a bill to permit certain municipalities to extend closing time and last call hours for the sale and service of alcohol from 2 a.m. to 4 a.m. Sound familiar? It is nearly the exact same subject matter as old Last Call that Senator Wiener gutted and amended in the 2017 legislative session to pass his controversial sex offender registry amendments that previously were in Sex Offenders.

Fool me once shame on you, fool me twice, shame on me. We should all watch SB 58 pretty closely as well. Twenty-six of Senator Wiener's bills/resolutions are still "alive" this session, 19 of which have passed the Senate and are pending in the Assembly. The two identified -- SB 58 (extended hours for alcohol sales to 4 a.m. in certain jurisdictions) and SB 592 (licensing of Barbers and Cosmetologists) seem to be the most likely vehicles for a gut and amend but it does not need to be one of those two.  It could be any of Senator Wiener’s other bills OR any of the bills of one of his co-authors OR one of the bills of a newly minted co-author. There are a number of bills that have "SB 50 like" language and provisions that could revive SB 50.

We, the voters, passed Proposition 54 in November 2016 to require greater transparency in our legislative process in large measure to stop the widely criticized practice of “gut and amend.” Prop 54, among other things, requires the publication and public display of all bills on the Internet for at least 72 hours prior to a vote. That is not what Senator Wiener did last year and unless we sound a clarion call to Sacramento that we will not tolerate these underhanded tactics, that is what he is likely to try to do again.

Let us hope that our state legislators acknowledge the constitutional limits of their power and stop acting like bullies and autocrats with “alternative facts.” Let us hope our state legislators have not gotten so drunk with supermajority powers that they really think they know best how to govern without listening to us, the electorate. They don’t and they can’t. We, the electorate, may be a slumbering giant but we are awakening and there is nothing like Trumpian tactics from either side of the aisle that bring us into the public arena in full force.

Senator Wiener -- read our lips: Building more market rate housing does nothing to solve the affordable housing crisis or the homelessness crisis. In fact, market rate housing, especially speculative housing bundled and sold in securitizations in the global capital markets, creates enormous displacement, raises rents in the surrounding areas and increases the ranks of the unhoused dramatically. Denying that inescapable truth is no different than the climate change denials coming out of Washington DC. Fair warning not only to Sacramento but also to the industry interests behind this land use legislation – you proceed at your peril and the clapback from the electorate is likely to be something you never expected.