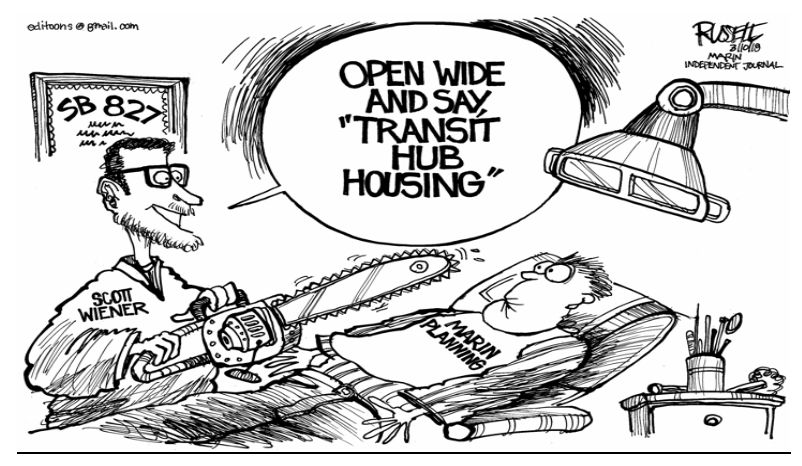 PLATKIN ON PLANNING-The first efforts to prime the media pumps for a giant real estate giveaway program, California Senator Scott Wiener’s proposed Senate Bill 50, also dubbed the Son of SB 827 or SB 827 2.0, are out of the gate. So far, the arguments marshalled to bolster Wiener’s legislation fall flat, as I explain below.

The most prominent recent article promoting SB 50 was Bill Boyarsky’s opinion piece in the Los Angeles Times. He praised the YIMBY (Yes in My Backyard) real estate lobbying group that drafted Senator Wiener’s bill, and he called the bill’s community critics NIMBYs (Not in My Backyard), an epithet coined by developers to disparage their detractors without addressing their arguments. For those who want to understand how the proposed SB 50 bill, which Mr. Boyarsky supported, will backfire, Casey Maddren, elegantly laid out the case in his February 17, 2019, CityWatchLA article.

The second article praising SB 50 was Josh Stephens call in Planetizen for Californians to recognize their common destiny, which he equated with large, private sector apartment buildings built where developers can maximize their profits, such as near transit. While “common destiny” could (and should) apply to California’s imminent cataclysmic earthquakes, social and economic inequality, mega-droughts and mega-floods, heat waves, sea level rise, wild fires, mediocre public education, and the collapse of public services and infrastructure, Stephens ignores them all. For him common destiny only means one thing, high density, high-end private sector apartment buildings.

Instead, like other WIMBYs (Wall Street in My Backyard), Stephens glibly presents a lofty, common-destiny goal: solve the housing crisis by supporting Senator Wiener’s SB 50. If Sacramento forces California cities to allow private investors to build tall, pricey, lucrative, high density, and currently illegal apartments up to a half-mile from subway lines, bus stops, and in communities with good jobs and schools, those beloved real estate developers will have saved the day. Their pursuit of 15 to 20 percent annual rates of return will flood housing markets with so many vacancies that prices will fall, become affordable, while subway cars and buses will fill up with passengers.

Stevens’ wonderful solution, however, does not include any data supporting Wiener’s up-zoning scheme or an assessment of competing programs to address the housing crisis, such as:

In his hurry to promote SB 50, Mr. Stephens also neglects to include any monitoring programs.  With these monitoring program, cities could determine if the statewide, top-down residential up-zoning approach the YIMBYs campaign for through Senator Wiener’s SB 50 would -- or would not -- result the following:

If cities had this monitoring information, they could make mid-course corrections, such as revoking zone changes, if -- as I predict -- SB 50 fails to achieve its goals. But it is not a random accident that the proposed Stephens-Wiener legislation fails to consider alternatives to up-zoning privately owned parcels or include monitoring once its statewide up-zones are imposed. For these density hawks, coerced up-zoning should be permanent, even if the common destiny goals invoked to justify them turn out to be political marketing ploys.

Furthermore, many more things are likely to go belly-up if SB 50 becomes law, and a monitoring program would soon reveal the following:

Let me close with a modest suggestion. SB 50, which is actually worse than SB 827, deserves its same fate: a quick dispatch to the round file.

(Dick Platkin is a former Los Angeles city planner who reports on local planning controversies for CityWatchLA.  He also serves on the board of United Neighborhoods for Los Angeles (UN4LA).  Please send any comments, corrections, or article suggestions to rhplatkin@gmail.com.) Prepped for CityWatch by Linda Abrams.